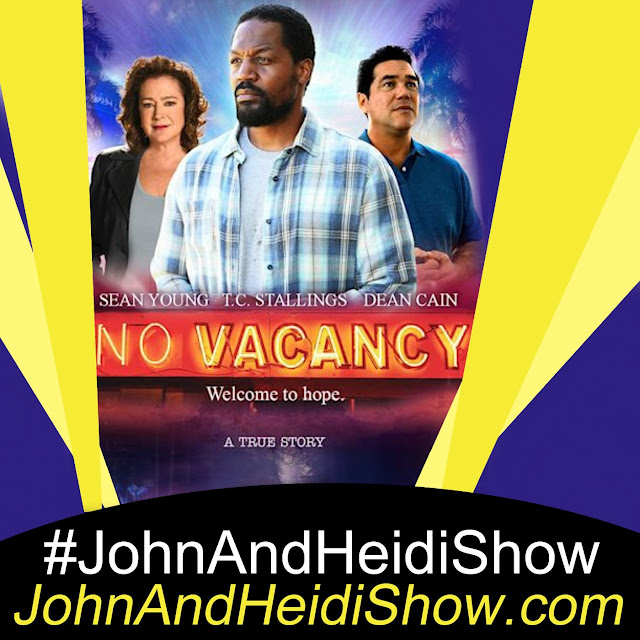 Today we visit with T.C. Stallings (Couregous, War Room) about his latest film No Vacancy. This is based on an incredible true story. NoVacancyMovie.com

Do you wake up in the morning, and it feels like you only slept for a few hours – again. If you’re looking to get better quality zzzzzzzs, a sleep specialist suggests you include a shower in your bedtime routine. Olivia Arezzolo, author of “Bear, Lion, Wolf”, say the pandemic caused the average person’s sleep to get worse, with some people spending hundreds these days on supplements to improve their rest. And with our busy schedules these days, and high levels of anxiety and stress, things aren’t getting any better. She says to minimize the amount of time it takes to drift off, and to ensure maximum benefits from your sleep, you should:

• Shut off technology, as blue lights from phones, laptops, tablets and televisions are known to impact sleep.

• Take a shower, as it promotes melatonin when the water brings your body temperature down.

• Integrate calming scents in your body wash, such as lavender and vetiver. Both reduce activity of the sympathetic nervous system, which can otherwise make you feel tense.

• In the bedroom, create a sanctuary with no screens, a spritz of calming scents in a pillow spray and a dab on your pulse points.

• Meditate or read for 20 minutes.

Domino’s Italian experiment has fallen like…well, you know. Seven years after its debut in the country, the American pizza giant has formally shut its stores after failing to win over locals who prefer homegrown options. EPizza SpA, the franchise operator of the Domino’s brand in Italy, filed for bankruptcy in April, and the company closed all its stores by July 20.

Jennifer Lopez and Ben Affleck have given up their never-ending search for a new home for their blended fam — and decided to live at the place J-Lo has called home for years. Reportedly, they’ve decided to take up permanent residency in Lopez’s Bel-Air home. But first: it’ll undergo a massive remodel, so they won’t be able to move in for a year — or more. The Ben & Jen clan moved into a massive, $60 million Bev Hills home in June, but apparently, that’s just a rental, to make do until the remodel is complete. As for J-Lo’s estate, the main house is about 14,000 square feet, with 7 bedrooms and 13 bathrooms. It’s on 8 acres, so there’s room to make it bigger. She bought the place from Sela Ward in 2016 for $40 mil, did an extensive remodel then.

NBC and the Television Academy have finally found a host for this year’s Emmy ceremony: “Saturday Night Live” star Kenan Thompson. Thompson, the longest-running cast member in “SNL” history, was named after a lengthy search to find an A-list name that might shake things up. It turns out, the A-lister was in their own backyard. The telecast will air live Sept. 12 on NBC, and stream on Peacock. Thompson has plenty of hosting experience over the years; last year, he hosted both the 2021 Kids’ Choice Awards and the 47th People’s Choice Awards. He also served as emcee for the NHL Awards in 2019 and 2022.

A report says that an increasing number of high-end restaurants are doing away with reservations.

A report claims that people who eat fried foods have a 60% higher chance of getting heart disease.

Mike Tyson continues to bash Hulu’s limited series, “Mike,” claiming that it was made without his blessing and that the series is “tone deaf.”

Sharks existed before trees (They’ve been around for about 400 million years).

Every time you shuffle a deck of cards, you get a combination that’s probably never existed before.

In his lifetime, the average man removes 28 feet of hair through shaving.

A newborn expels its own body weight in waste every 60 hours.

Question: According to a poll, avocado toast is the most overrated breakfast food. THIS came in at #3. What is it?

A man was arrested after starting a wildfire while attempting to kill a spider with a lighter. The Utah County Sheriff’s Office says cops responded to call on Monday for a fire that was quickly spreading up a mountain. Fire personnel told the officers that they spoke with a man named Cory Martin, who said he had started the fire. He claimed he had found a spider on the mountain, and was trying to burn it with a lighter, when he caused nearby brush to catch fire. Police say the man was taken to the Utah County Jail for reckless burning, possession of a controlled substance, and possession of paraphernalia, before being released that night. By the time several fire agencies managed to contain 90% of the fire 2 days later, 60 acres had been scorched.

Although summer is almost over, sunburns are still possible. Thankfully, there’s an easy remedy for treating them. Apply teabags directly to your wounds or press a tea-soaked washcloth to your skin.

Hang a tennis ball in your garage so you know (when you hit it) when to brake while parking.

Keep a plastic container in your car so that your empty soda cups and used napkins don’t end up on the floor or the backseat.

"Housekeeping is like being caught in a revolving door." - Marcelene Cox

It could restore sight for the up to 13 million people who have gone blind due to diseased corneas. Researchers have developed an implant made of collagen protein from pig’s skin, and restored vision to 20 people. The promising result of the trial brings hope to those suffering from corneal blindness and low vision by providing a bioengineered implant as an alternative to the transplantation of donated human corneas, which are scarce. Professor Neil Lagali, at Linköping University in Sweden, said “The results show that it is possible to develop a biomaterial that meets all the criteria for being used as human implants, which can be mass-produced and stored up to 2 years and thereby reach even more people with vision problems.” Currently, just one in 70 patients receives a human cornea transplant.