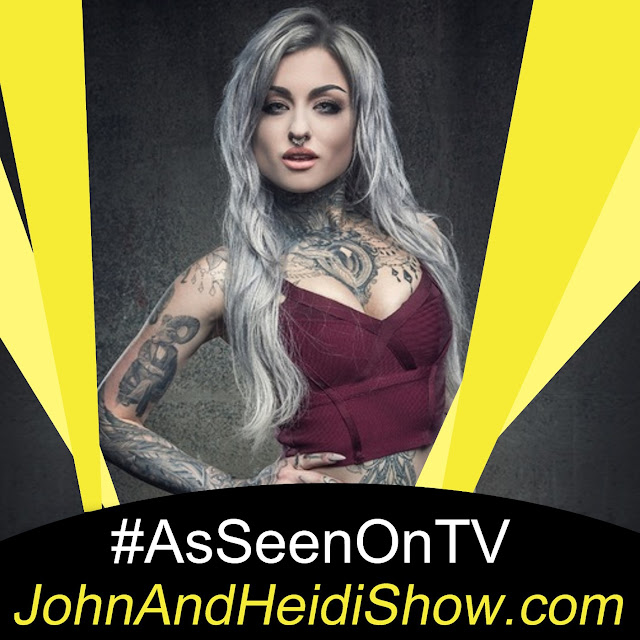 One of the new judges is Ryan Ashley, a master of intricate black & grey tattoos, who made history as the first woman to win the title of Ink Master. Following her big win, Ryan went on to co-host Ink Master Angels and Ink Master Grudge Match.

It should come as no surprise that in recent years, the problem of online harassment and hate have increased exponentially. Why? Many people blame things like increased political polarization, bigotry, and income inequality, but researchers say they’ve have found another factor that may be to blame: the weather. A new study from the Potsdam Institute for Climate Impact Research found that people behave more aggressively online when the temperature gets too hot or too cold. They analyzed more than 4 billion tweets posted in the US between 2014-20, and compared them with historical climate data, concluding that extreme weather fuels mean tweets – especially extreme heat. They actually found a “sweet spot” where aggressive online activity levels off. The “feel-good” window occurs when the temperature is 12–21°C (54–70°F). Online hate was found to increase up to 12% for colder temperatures and up to 22% for hotter temperatures. Oh, and by the way, the researchers found that staying indoors on hot or cold days doesn’t help curb mean tweets.

A nursing home in Japan is “hiring” babies for a very important job – to keep its elderly residents company and make them smile. The salary? Diapers and milk formula. New recruits at the facility in Kitakyushu must be under 4 years old, and parents must sign a contract stipulating that the babies and toddlers can show up for work “whenever they feel like it”. They are allowed to take a break “when they feel hungry, sleepy or depending on their mood”, according to the contract. More than 30 babies have been signed up so far.

Brendan Fraser’s return to Hollywood at the 79th Venice Film Festival was met with many tears. During Sunday night’s world premiere of “The Whale”, the 53-year-old was overcome with emotion as he sobbed throughout the film’s entire 6-minute standing ovation. In the psychological drama directed by Black Swan’s Darren Aronofsky, Fraser portrays a 600-pound gay man confined to a wheelchair. He spent 6 hours in makeup each day in order to transform into the character. Inside the Sala Grande Theatre in Venice, a number of other audience members also shed tears during The Whale’s heartbreaking final scenes. During the ovation, Fraser hugged Aronofsky several times and bowed to the audience as they cheered loudly for his performance, which looks promising in the 2023 Oscars race for best actor. LINK: https://tinyurl.com/55shzwus

Movie theaters once again experienced a horrible end-of-summer weekend at the box office. Without any major releases on the calendar, Sony’s “Spider-Man: No Way Home” — WHICH debuted in December of 2021 — managed to return to the #1 spot in North America over Labor Day weekend. Sony re-released the film with 11 minutes of extra footage that proved to be tantalizing to some comic book fans, bringing in about $7.6 million. “Top Gun: Maverick” was expected to nab about $7 million for second place. The triumph of “Spider-Man: No Way Home” and “Top Gun: Maverick” highlights the bleak landscape at the box office, considering both are already widely available on home entertainment.

Life expectancy in the US has fallen to 76.1 years of age; however, scientists say that walking 30 minutes a day can add years to your life.

Los Angeles was founded this week in 1781.

By the year 2100, more accounts on Facebook will be owned by dead people than the living.

Competitive art, including sculpture, music and painting, were once Olympic events.

Through the process of evaporation, condensation and precipitation, all water on earth is millions of years old.

From a DNA perspective, all humans are more than 99% identical. Visual differences or internal variations are only due to a tiny variation in genetics.

Not everyone can focus and defocus their eyes at will.

Question: THIS happens more often on Tuesday than any other day of the week. What is it?

Answer: Being late for work

We all know that a trip to a theme park isn’t going to be cheap. Even so, a family of 4’s total for a visit to Universal Orlando Studios has shocked the internet. A TikTok video documenting how the one-day outing to the park in Florida cost more that $1,100 went viral over the weekend, generating more than 1.5 million views. British marketing expert Miranda Pearce flew with her husband and their 2 young sons to theme park. They paid $483.66 for tickets, plus an additional $396 for Fast passes, which allows visitors to skip the line at some rides. Add to that $62.79 for lunch; $42.60 for souvenirs; $36.39 for dinner; $27 to park; $21.79 for breakfast; $19.76 for ice cream: $19.16 for drinks; and $4.25 for coffee – for a total of $1,113. And, as Pearce wrote in her post, “That’s not even including tips”. She added a few emojis for emphasis. Commenters expressed their shock at the prices, with one writing that they “could have gone away to Portugal for a week and rented a villa for that.” LINK: https://tinyurl.com/4tkna2pj

➢ Waterproof your shoes: Rub an unscented candle thoroughly against a canvas shoe, and melt it with a hairdryer. The wax will disappear and act as a protective coating.

➢ Remove ink stains: One word: WD-40. But be careful; it will damage delicate fabrics.

➢ Staticky hair: Take a dryer sheet and stick it to the base of your brush. They can also be used in stinky shoes to remove the smell.

All the things I really like to do are either immoral, illegal or fattening. - Alexander Woollcott

A woman who nearly died after a miscarriage has welcomed a baby girl after 20 years of trying to conceive. 37-year-old Rebecca Dando of Wales, had always dreamed of being a mom but thought it wouldn’t happen after she was rushed to hospital when she hemorrhaged due to a miscarriage in 2021. She suffered multiple miscarriages from the age of 18, but after meeting her partner, Christopher Thomas, in 2019, she decided to try for a baby again. After no luck for a year, she was surprised to find she was expecting in September 2021, and Lowri Joan Dando was born on May 23, weighing 7lb 6oz, via emergency c-section. Rebecca says she’s loving every minute” of being a mom.