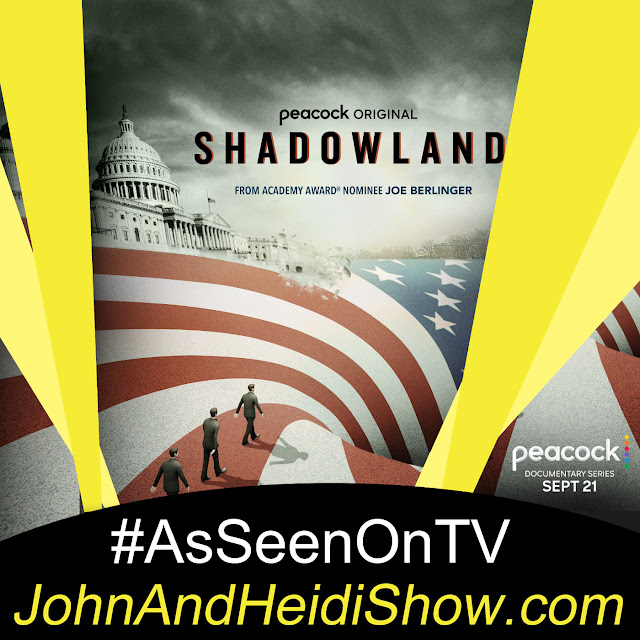 Today we visit with award-winning filmmaker Joe Berlinger (Paradise Lost, Brother’s Keeper) about his latest project – the docu-series Shadowland - reveals how conspiracy theories have moved from the margins to the mainstream and their danger they pose. “Shadowland” premieres next Wednesday, September 21st, on Peacock. https://www.peacocktv.com/

The nose knows when it comes to sniffing out new friends, according to research. A new study, published in Science Advances, tested the hypothesis that body odor contributes to bonding in pairs of same-sex, non-romantic people. The bottom line? People with similar body odors are indeed likelier to become friends, say the researchers, from Israel’s Weizmann Institute of Science. The lead author said: “The gist is that people who ‘click’ with each other have similar body odor.” The scientists also found that established friends tend to smell more alike than random pairs of strangers. And the team of researchers say they’ve been able to use an electronic nose that maps odor similarities to predict which pairs of strangers would end up bonding during social interactions.

A run-in with the law apparently isn’t the career-killer it once was, according to researchers from Harvard Business School. Researchers there report many American employers are willing to consider and hire applicants with a criminal record. An analysis found 39% of businesses are willing to hire someone with a criminal background. Meanwhile, 45% of businesses are open to hiring such employees for jobs that do not involve directly interacting with customers.

Spencer Pratt has explained himself after describing Lisa Kudrow as “one of the worst humans” he’s ever met. Pratt made the claim about the “Friends” star on TikTok in response to a fan who asked him to name the rudest celebrity he’s ever met. After many of his followers asked him to reveal his reasoning, especially considering Kudrow is beloved by many, Pratt, best known for reality show “The Hills”, said that in 2009, when he and his wife Heidi Montag were invited to their first “elite A-list party”, Kudrow approached the couple, and proceeded to tell his wife, QUOTE: “that she needs to get away from me as fast as possible because I’m going to murder [her]”. Pratt claims Kudrow then told him he had “the eyes of a serial killer”. Pratt says following that…there were “no laughs; she just walks away, and that right there was the rudest moment I’ve ever encountered with a human being.”

Meet Cy! Jennifer Lawrence has revealed her 6-month-old child’s name and sex, telling Vogue in her October 2022 cover story that she gave birth to a baby boy in February. The little one’s NAME, “CY”, Was inspired by one of her husband Cooke Maroney’s favorite artists, Cy Twombly. Lawrence says in the article that she felt like her “whole life … started over” when they welcomed the infant, calling his arrival her new “day one”, explaining, “I just stared. I was just so in love.”

Scientific America has an online article on how to stop procrastination.

One of the biggest worker strikes in US history is brewing at UPS.

According to a survey, Americans lack faith in the government, and the media. Over 50% said they have “not too much” or “no confidence at all” in the media.

A study has found that crying actually does make you feel better.

About 1 in 1500 people can give themselves goosebumps at will.

Although there are several theories, no one is certain why we yawn.

Your brain re-writes a memory each time you think of it, slowly altering it or twisting it over time.

The Romans used to clean and whiten their teeth with urine. Apparently, it works.

Question: 1 in 9 elementary school students say they would love to be in charge of THIS when they grow up. What is it?

While everyone’s talking the new Apple iPhone 14s this week, lawmakers in Brazil can’t get over the fact that the company is no longer supplying chargers with their phones. And as a result, the country’s Ministry of Justice has banned the sale of iPhones in Brazil until Apple starts putting chargers back in the boxes. The department issued the order Tuesday alongside a fine equivalent to US $2.3 million for the tech company, which has sold smartphones without a charger since the release of the iPhone 12 (2020). The Ministry of Justice and Public Security argued that selling the phones without chargers equates to selling an ‘incomplete product’. Apple claims that the decision was made out of ‘environmental concern’, but the Brazil’s consumer affairs branch said the burden of securing a charger was then transferred to the customer.

➢ Smartphone stand: In a pinch, simply flip a pair of sunglasses upside down.

➢ Check batteries: Drop an alkaline battery from 6 inches on a flat surface, negative side down. If it bounces once (or not at all), it’s good. If it bounces more, it’s dead.

➢ Unclog a toilet: If you don’t have a plunger handy, get a large water or pop bottle and cut off the top. Plunge away!

➢ Express elevator: If you need to get to your floor quickly, push the close door button and hold it, then push the floor you need to go to. The elevator should ignore all other floors and go right to yours. Note: In some elevators the “door close” button doesn’t work at all and is just a placebo.