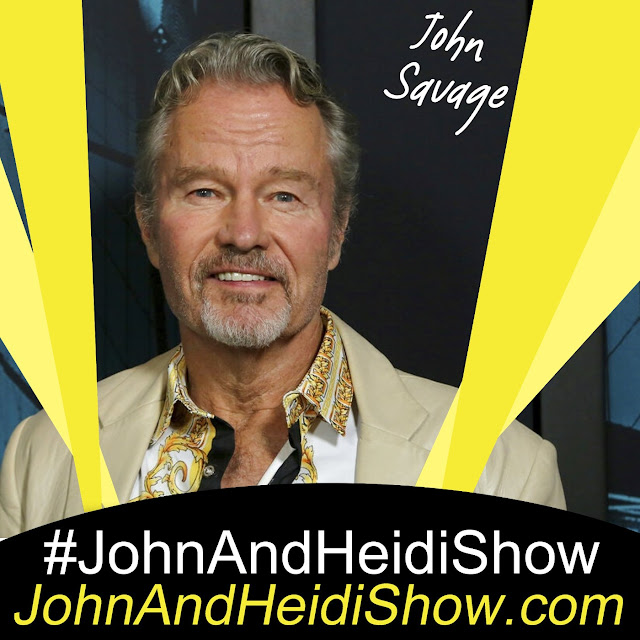 Today we visit with actor John Savage (Deer Hunter) about his new film Eye For Eye.

ABOUT EYE FOR EYE
Take all a man loves and he becomes a dangerous adversary...for he has nothing left to lose or live for. Quint Reagan hangs up his badge and picks up his Colt, Henry and scattergun, sells his herd and ranch, and goes on the prod for those who killed his pregnant wife. Even if there's a hundred riding for the brand between him and his prey.

Taking into account some of the biggest shows from 2022, the team have studied scripts of varying genres to break down the shows that have the most angry words in them, spanning a duration of three hours. The percentage of negative vocabulary from each show was then worked out to rank and reveal the most romantic shows.

Here are the top three most romantic shows:

Unsurprisingly, the show with the most loving words overall was ‘Bridgerton’, which racked up a very impressive score of 644. From proposals to promenades, this show oozes romances and heartfelt emotion. Throughout the three hours of the show that was broken down, 9.76% of the words communicated had references to love.

Teen drama ‘Sex Education’ had the second-most loving words out of all the shows picked up, scoring 643 overall. Across the three hours, 9.75% of the words used in the show were related to love and happiness, and the relationships featured on the series may have something to do with this.

‘And Just Like That…’ had the third-most loving words across all of the shows looked at, with 567 over the first three hours and 8.60% of the words scoped out in the script showing signs of romance.

In a commentary published in the New York Times, Ashley Judd explains why she has filed a petition attempting to block the release of a report on the death of her mother, Naomi Judd — saying “the horror” of the experience “will only worsen if the details surrounding her death are disclosed by the Tennessee law that generally allows police reports, including family interviews…to be made public.” Judd reveals that her mother — who died from a self-inflicted gunshot wound at home on April 30 — was still alive when police arrived, and contends that the barrage of questioning kept her from attending to her mother in some of her final moments. Most relevant to her objection to the report is that she says family members revealed many personal things in the interrogation without any thought as to how those details would forever become part of the public record.

“The View” has announced the show’s celebrity lineup for season 26 — and it includes some big names. The season, which kicks off Tuesday, will open with Hillary Clinton and daughter Chelsea Clinton promoting their docuseries “Gutsy”. From there, a list of revolving guest hosts will take the table’s extra seat, including “Hello Sunshine” founder Reese Witherspoon, “iCarly” alum and author Jennette McCurdy, “Abbott Elementary” star and creator Quinta Brunson. Others include actors Regina Hall, Constance Wu, Viola Davis, Billy Eichner, Elisabeth Moss, Jameela Jamil, and Dylan McDermott, plus “Mel C”, LeAnn Rimes and Idina and Cara Menzel.

An Idaho man snapped 139 matches in half in 30 seconds to earn a Guinness World Record. David Rush, who has broken nearly 250 Guinness World Records to promote STEM education, previously broke the 30-second version of the record by snapping 83 matches. https://www.upi.com/Odd_News/2022/08/29/Guinness-World-Records-David-Rush-snapping-matches/5161661784560/

Two to three teaspoons of raw nutmeg can induce hallucinations, convulsions, pain, nausea, and paranoia that can last for several days.

BMW hold the world record for the longest continuous car drift at 232.5 miles. It was even refueled from another car mid-drift.

The term “junkie” comes from the fact that heroin users in the early 1900s would collect and sell scrap metal to pay for their fix.

Question: A survey says the average adult hasn’t done THIS in the last 5 years. What is it?

Answer: Made a new friend

A pilot of a flight to Cabo San Lucas, Mexico, took to the intercom and threatened to return the aircraft to its departure gate if passengers didn’t stop AirDropping nude photos to him. Through AirDrop, iPhone users can send digital files to other Apple products in close range without using Wi-Fi or data. TikTok user @TeighMars posted footage where the pilot tells passengers: “So here’s the deal, if this continues while we’re on the ground, I’m going to have to pull back to the gate, everybody’s going to have to get off, we’re going to have to get security involved and [your] vacation is going to be ruined.” He goes on in the viral clip, which has almost 3 million views: “So you folks, whatever that AirDrop thing is, quit sending naked pictures, and let’s get yourself to Cabo.” As you can imagine, amused TikTokers had their own responses to the airplane hijinks, with one commenting: “Pilot had ‘Don’t make me turn this plane around!’ energy Love it!” LINK: https://tinyurl.com/bfczswfj

This Math Teacher Commuted 4 Hours A Day. His Students Surprised Him With A Car https://www.sunnyskyz.com/good-news