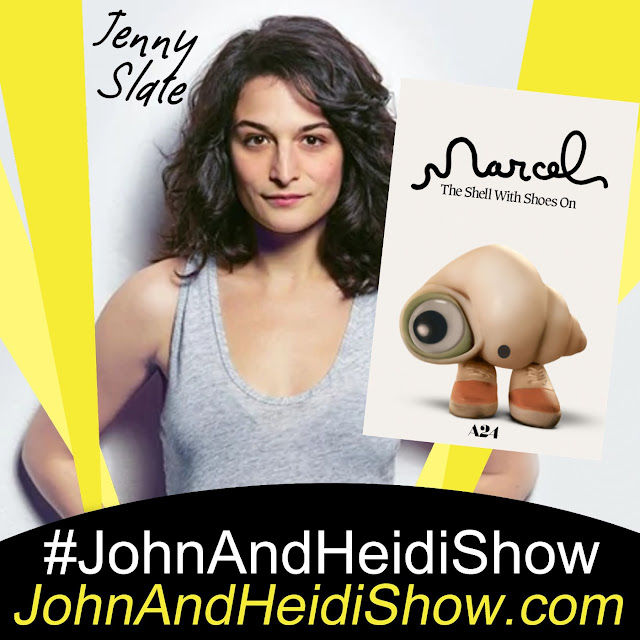 Today we visit with writer, voice over actor, comedian Jenny Slate (The Secret Life of Pets, Muppet Babies, etc) She is a New York Times bestselling author, known as the co-creator and voice of Marcel the Shell with Shoes On. Slate’s major voice credits include Disney’s “Muppet Babies,” FOX’s “Bob’s Burgers,” Fox’s “The Great North,” Netflix’s “Big Mouth,” and Disney’s “Star vs. the Forces of Evil.” In film, Slate’s major voice credits include Illumination Entertainment’s The Secret Life Of Pets and The Secret Life Of Pets 2 as Gidget and Disney’s Zootopia as Assistant Mayor Bellwether.

Her most recent project “Marcel The Shell With Shoes On” came out this summer and has done very well! (Received %100 on Rotten Tomatoes)

Staring at your phone for hours upon hours is not only taking up a lot of your time – it’s making you older. Or at least making you LOOK older. Dermatologists have long understood that UV rays from the sun damage the appearance and overall health of the skin — but new findings from a study published in the journal Frontiers in Aging indicate that “excessive exposure to blue light (from our devices)…may have detrimental effects on a wide range of cells in our body, from skin and fat cells, to sensory neurons,” including the creation and deepening of wrinkles. Oregon State University scientist Jadwiga Giebultowicz said the study “suggests that avoidance of excessive blue light exposure may be a good anti-aging strategy.” The team also pointed out that it’s been previously declared that “too much screen use has been linked to obesity and psychological problems.”

It’s been revealed that Anne Heche did not leave a will, so her adult son has requested to gain control of the late actress’ estate following her untimely death last month. Homer Laffoon filed paperwork in Los Angeles Superior Court requesting he be named administrator. The 20-year-old is also seeking the court name him guardian over his 13-year-old brother, Atlas, court documents show. Homer noted that the estimated value of Heche’s estate is “unknown,” so it will have to undergo forensic accounting. There is a hearing scheduled for Oct. 11.

Johnny Depp’s brief cameo at the VMAs was embraced by some, but it’s stirring up outrage as well — specifically from Amber Heard’s sister. Whitney Henriquez posted a screenshot of MTV’s award show logo, but she placed an ominous letter at the front … a big capital D. So now, on her page, it reads DVMA — which alludes to domestic violence. She also wrote: “@MTV YOU’RE DISGUSTING AND CLEARLY DESPERATE! I REALLY HOPE THAT NONE OF THE PEOPLE THAT MADE THIS CALL HAVE DAUGHTERS… #DVMAS #ISTANDWITHAMBERHEARD.” At the beginning of Sunday’s MTV Video Music Awards, Depp’s face was digitally shown inside the Moonman costume that was floating above the stage, and he delivered a short, corny monologue.

Apparently at some remote campgrounds in Montana where standard sewers are not available, they use something called a vault toilet. Vault toilets have a tank for holding waste that is usually about five feet deep, so you can imagine they can be pretty nasty. Ok, back to our story. A photo has been circulating recently on Reddit showing our naked bozo literally up to his elbows in a hole in the ground inside a concrete outhouse. Apparently he had dropped his phone into the toilet and he desperately wanted it back. Bad enough that he removed the porcelain throne, stripped naked and climbed in to retrieve it. And did we mention he locked the door behind him? Good idea…unless you get stuck, which he did. He was in deep doo-doo for three hours until someone else finally came along and discovered his plight. Montana Fish, Wildlife and Parks employees were called, the door was broken down and our bozo was eventually extracted. And that phone? Still missing.

Scientists have determined that that your body truly can feel happiness from head to toe.

Lego bricks can be used approximately 37,112 times before they won’t stick to other pieces anymore.

One study concluded that if a woodchuck could chuck wood, it would chuck about 318 kg (700 lbs.)

The longest wedding veil was the same length as 63.5 football fields.

Question: According to a survey of kids, 50% prefer to receive chocolate for Halloween, 24% prefer non-chocolate candy — and 10% prefer THIS. What is it?

Step aside, ultramarathoners: America has a new endurance athlete, and he’s as gourd as it gets. A Nebraska man has set a new world record after paddling 38 miles (61km) down a river in a huge, hollowed-out pumpkin that he grew himself. Duane Hansen completed his journey last week, according to a Facebook post from the city of Bellevue. Photos show Hansen crouched inside the giant squash, which weighed in at 846lb. Hansen set off down the Missouri river around 7:30am and completed his journey just after 6:30pm. The 60-year-old, who named the orange vessel Berta, said of his experience: “I went 38 miles down the river without standing up in that pumpkin and my knees still hurt.” LINK: https://tinyurl.com/2hsbzxsw

Check out the 10 cities with the dreariest lawns (and the 10 with the greenest) below, followed by key insights from our report. (Click here to see where your city ranks.)

Where Lawns Go to Die

A day without laughter is a day wasted. - Charlie Chaplin


GOOD NEWS: Brought to you by RadioTravelGroup.com