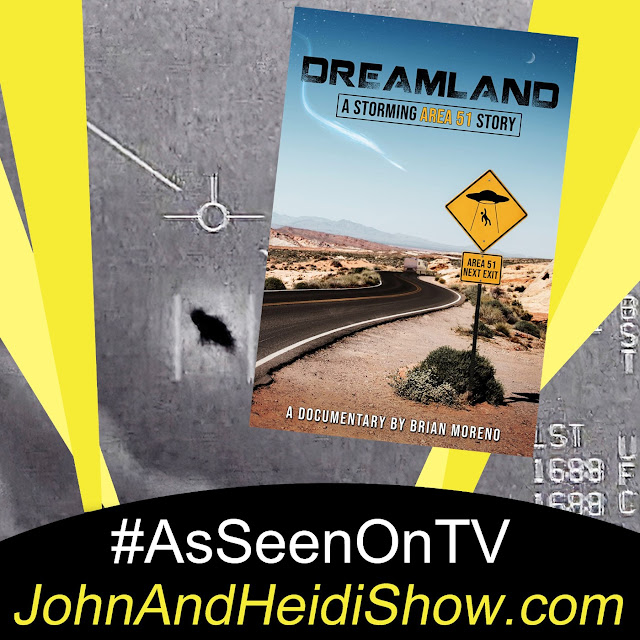 Today we visit with comedian and director Brian Moreno, the guiding force behind this fascinating new documentary/mocumentary Dreamland: A Storming Area 51 Story. You may remember a few years back when a meme on Facebook led to a movement of people claiming they were going to storm Area 51 and find out once and for all what's inside of the secret base. Brian and his team went there and filmed all the action that took place. He said he ended up making a movie he never planned to make. https://amzn.to/3xFxt9E

An analysis of studies has reiterated previous research that says growing up with a dog can be good for a child’s health and happiness. The people at the Human-Animal Bond Research Institute (yes, there IS such a thing!) say that scientists frequently examine how growing up with a dog affects children, and they say these are some of the benefits:

• Childhood pets can be perceived to be nonjudgmental, confidential, and accepting sources of support.

• Pets can be perceived as presenting their feelings authentically in the moment and being more forgiving than humans.

• Growing up with a dog (or other pet) fosters care and responsibility.

HABRI also co-funded a study at Yale University regarding whether interactions with pet dogs can improve symptoms of stress in children. The conclusion? “Brief, unstructured interactions with dogs boosted children’s positive emotions and reduced anxiety.”

Students who write their notes by hand tend to get higher grades than their peers, according to new research. A OnePoll survey asked 2,000 parents whether they’ve noticed a preference for digital or analog studying habits in their children aged 6-18. Although taking notes electronically (34%) proved slightly more popular than handwriting (30%), those who use a pen or pencil had a higher median GPA (3.2) than the overall average (2.9). Interestingly, left-handed children favored handwriting more frequently (57%) than right-handed ones (30%).


Zac Efron has finally set the record straight on his face transformation a year after sparking plastic surgery rumors. He told Men’s Health, in his October cover story, that he shattered his jaw while running in his house with socks on. The 34-year-old said he slipped, hit the corner of a fountain, passed out and woke up to his “chin bone … hanging off” his face. Amid the “High School Musical” star’s recovery, his facial muscles got “really, really big” to compensate for the injury, so he worked with a physical therapist to counteract their growth. Efron previously broke his jaw in 2013. Fans first noticed Efron’s transformed face in April 2021, which led to rumors that he had gone under the knife.

When “The Masked Singer” Season 8 debuts tonight (Sept 21) with an all-new format. There will be at least 2 unmaskings in each episode, with surprise eliminations along the way. Producers are also taking a page out of the “Dancing With the Stars” book by introducing theme nights. The first 3 rounds will follow a “King and Queen” style, with one of 2 contestants eliminated in the middle of the show. The 2 remaining singles will perform again in a “Battle Royale” to declare the ultimate winner of the episode. After 3 rounds, there will be 3 semifinalists. https://www.fox.com/the-masked-singer/

Just as an organizer cut the ribbon at the ceremony to inaugurate a new foot bridge in the Congo, it collapsed, leaving dignitaries and officials tumbling into the creek below.

50 Cent and Floyd Mayweather have apparently ended their feud.

A study claims that parents who share child-raising duties have better sex lives.

31% of guys have borrowed deodorant from their partner.

90% of us no longer answer the phone when it’s an unknown number.

4% of us are afraid to ride in an elevator.

In Calama, a town in the Atacama Desert of Chile, it has never rained.

Dueling is legal in Paraguay as long as both parties are registered blood donors.

A UK company allows “being hungover” as a valid reason for missing work. Employees are allotted 4 hungover days per year.

55% of people yawn within 5 minutes of seeing someone else yawn.

Donald Duck comics were banned in Finland because he doesn’t wear pants.

Question: Research shows that people who do THIS on a regular basis are happier than those who don’t. What is it?

A Minnesota teenager broke his own Guinness World Record when his open mouth was measured at 4.014 inches (10.2cm). Isaac Johnson originally set the record at age 14 in 2019, when his mouth gape was measured at 3.67 inches. His record was broken later the same year, but Johnson reclaimed it in 2020 when his gape was measured at 4 inches, and now he has broken his own record on an Italian TV show, where adjudicators measured his gape at 4.014 inches. Isaac, who says his family and friends have always known he has “a pretty large mouth”, can fit his fist, a full-sized orange, or 4 stacked McDonald’s cheeseburgers into his mouth. LINK: https://tinyurl.com/3f93hb66

REASONS TO BE EXCITED FOR FALL:

• Tailgating – Grilling is great, but grilling + sports + beer + getting way too competitive is even better.

• Hot Cocoa – Nothing helps you kick back like a hot cup of cocoa, especially if it’s spiked.

• Halloween Candy – The only time it’s acceptable to have candy for breakfast, lunch, and dinner.

• Apple Picking – If you don’t pick your own apples, then you’re doing Fall all wrong.

• Holiday Leftovers – Mashed potatoes for days. Cranberry sauce on everything.

• Pumpkin Spice Lattés – The first time each year that you catch a whiff of that pumpkin aroma, it’s magic.

• Mulled Wine – The perfect beverage for every Autumn party or family get-together.

• No More Hot Dogs – Bye-bye, Summer. We’ll be wanting you and your weenies again next year. Until then … so long tube steak!

“Marriage is the only war in which you sleep with the enemy.” - Francois de La Rochefoucauld