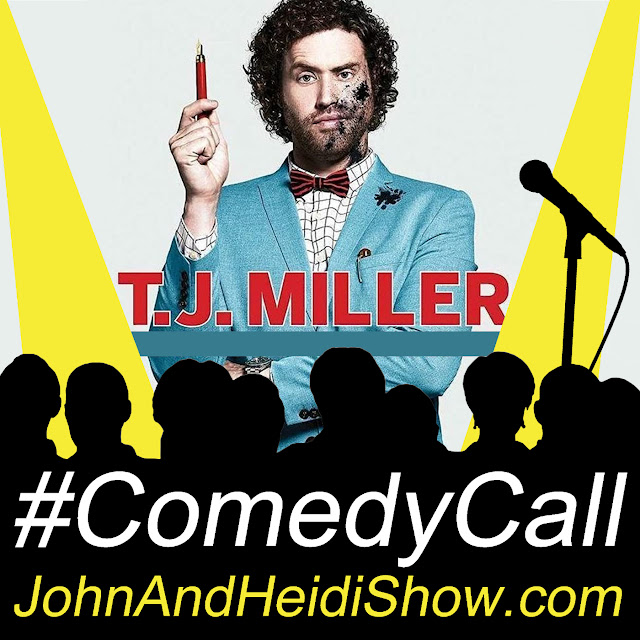 Today we have a #ComedyCall with the very funny and talented TJ Miller (Deadpool, Silicon Valley & much More)

We will talk about his brand new comedy special “Dear Jonah” named for one of the members of the audience at the taping of the show. You can watch the entire special for FREE at tjmillerdoesnothaveawebsite.com

THIS is the perfect time of year to get your priorities in order and set yourself up for a successful 2023, according to a survey. The OnePoll survey of 2,000 Americans ages 25-54 found that parents see fall as a time to get back into routine (73%), and to fulfill priorities like “getting my schedule organized,” “getting the kids settled in school” or “winterizing my home or cars.” Nearly two-thirds of respondents see fall as a time to readjust their priorities for the coming year (64%). Good thing, too, because only 20% say they are on top of routine doctor visits, and nearly half (47%) said that being busy means they often out off their personal health care – especially parents (50%).

Eating dinner late at night raises your risk of becoming obese, according to a new study. Researchers from Brigham and Women’s Hospital say late-night eating reduces the burning of calories, increases hunger, and causes changes in fat tissue — all of which can contribute to weight gain. They found meals just before bedtime have profound effects on the appetite-regulating hormones leptin and ghrelin. These findings provide new insight on how late-night eating can also lead to chronic diseases.

Brad Pitt is denying new allegations of abuse from Angelina Jolie. Tuesday, Jolie filed a countersuit in the ex-couple’s ongoing case regarding their French winery, and she included new claims describing the altercation on a 2016 private flight that led to the couple’s split. She said that Pitt “grabbed Jolie by the head and shook her…before pushing her into the bathroom wall.” The filing also alleges, “Pitt choked one of the children and struck another in the face.” But in a statement, a rep for Pitt said: “(Jolie’s) story continues to evolve each time she tells it with new, unsubstantiated claims. Brad has accepted responsibility for what he did but will not for things he didn’t do. These new allegations are completely untrue.”

In its second week atop the Netflix Top 10, “Dahmer — Monster: The Jeffrey Dahmer Story,” has become one of Netflix’s biggest ever television series. The controversial Ryan Murphy limited series, which stars Evan Peters as the notorious serial killer, has racked up 300 million hours viewed during its second week on the service, putting it behind only “Stranger Things 4” as Netflix’s second most watched English-language series in a week. Netflix estimates the show has reached 56 million households. The streamer’s top series, “Squid Game,” reached 62 million households in the same timeframe.

Rumors about King Charles’ coronation ceremony date seem to have been premature. Buckingham Palace has responded to claims that the date of Charles’ coronation ceremony has been confirmed for June, 3, calling them “purely speculation.” Reports cited “anonymous” government sources as saying the ceremony during which Charles will be officially crowned King will be held at Westminster Abbey on June 3 next year, almost 70 years to the day after his mother Queen Elizabeth’s coronation, which took place June 2, 1953. However, a Palace spokesperson says that the date has not yet been decided upon. King Charles’ coronation is expected to take place in the spring or summer of 2023. The ceremony has been planned for decades and it is believed to be taking place less than a year of the monarch’s ascension to the throne. The 73-year-old monarch ascended to the throne immediately after Queen Elizabeth’s death on September 8.

According to Forbes’ 36th Annual World’s Billionaires List, their combined worth is over $12.7 trillion.

A report says that most of us have at least one unfinished do-it-yourself project.

The Internet is baffled by an 1860 painting that appears to show a woman holding an iPhone. https://www.ladbible.com/

Willow bark can be used as an alternative to aspirin.

It would take 76 workdays (if you work an 8-hour day) to read every online privacy policy you agree to in an average year.

Jackrabbits got their names because their ears look like a donkey’s (or jackass).

Question: 32% of people admit they do THIS, even though they know it annoys almost everyone else. What is it?

Answer: Talk during a movie

A British artist known as Mr. Doodle caused a viral sensation when he unveiled the result of a project to cover every inch of his 12-room mansion in…doodles. Sam Cox, unveiled “The Doodle House” in a time-lapse YouTube video showing the process of his transforming his Kent, mansion into an art project over the course of 2 years. It is now covered inside and out in doodles, including surfaces such as the kitchen appliances and bed sheets. Cox used about 240 gallons of white paint on the inside of his house and 401 cans of black spray paint for the outside to create a surface for his drawings, which were made with 2,296 pens. He plans to live full-time at the Doodle House with his wife. Alena, aka Mrs. Doodle, and their dog. LINK: https://tinyurl.com/mwt5shm3

THE RICHEST PEOPLE IN THE WORLD:

War, the pandemic and sluggish markets hit the world’s billionaires this year. There are 2,668 of them on Forbes’ 36th-annual ranking of the planet’s richest people—87 fewer than a year ago. Here are the top 5 . . .

Nobody goes there anymore because it's too crowded - Yogi Berra