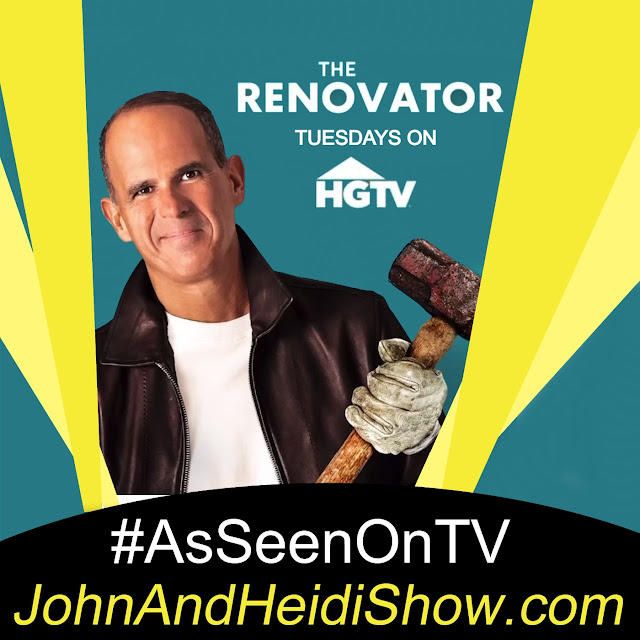 Our guest this weekend is Marcus Lemonis (The Profit) His new HGTV Series ‘THE RENOVATOR’ looks to make renovations to people’s homes—and their lives. Adding a fresh take on the home improvement format, showcasing select families in each week’s episode and providing a holistic approach to renovating their homes and lives.

What fast food restaurants have the best drive-thrus? According to a recent study carried out in the US, Taco Bell led the pack in terms of speed, with an average time of 221 seconds, followed by Dunkin’ Donuts, KFC and Arby’s. But that doesn’t tell the whole story. When you factor in the time that cars spend waiting in line, Chick-fil-A is the clear leader, with an average of about 107 seconds. McDonald’s came in second at 118 seconds, followed by Taco Bell and Arby’s. The annual Drive-Thru Report, produced by QSR and Intouch Insight found that in spite of a shortage of workers, drive-thrus have gotten nearly 10 seconds faster compared to last year.

A startup that sells water in beer cans — that’s literally it — is now approaching a $1 billion valuation, after just 3 years. Liquid Death raised a fresh funding round Monday, making it worth $700 million. Since its launch in 2019, the brand has had explosive growth thanks to its loyal fans, subversive marketing and unique packaging. Its latest investor thinks it might be the “fastest growing non-alcoholic beverage of all time.” Liquid Death said it is on track to bring in $130 million this year — nearly triple last year’s revenue.


New details have been announced about “Dune: The Sisterhood” – finally. The spinoff series will star Emily Watson (“Chernobyl”) and Shirley Henderson (“Harry Potter”). Watson will portray ‘Valya Harkonnen’ while Henderson will play ‘Tula Harkonnen’. These 2 are high-status members of an order simply called “The Sisterhood,” which will go on to become the Bene Gesserit. The show reportedly takes place about 10,000 years before the events of Dune. There’s still no word on when this series will premiere on HBO Max. “Dune: Part Two” has been filming since July, and is slated for release in Nov. 2023.

Sorry America, but President Rock will not be sworn into office anytime soon. After toying with the idea for years, Dwayne “The Rock” Johnson has declared that a presidential run is officially, “off the table”. In an interview with “CBS Sunday Morning”, he said: “I love our country and everyone in it,” but “I also love being a daddy.” The 50-year-old father of 3 girls – ranging in age from 4 to 21, called his daughters his “No. 1 priority…Especially during this…critical time in my daughters’ lives.” He said he knows what it’s like to be “so busy that I was absent for a lot of years for my first daughter’s growing up…And that’s what the presidency will do.”

Tom Cruise apparently has plans to one-up his astonishing fighter jet scenes in in “Top Gun: Maverick”, because for his next flick he wants to go nose-up into space. He’s in the process of making a deal with Universal to shoot a movie on the International Space Station. And that, of course, that would require he and other stars to be rocketed up there. He’s actually been tossing the idea around for a few years, but it was shelved during the pandemic. Universal seems to be on board, with Chairman Donna Langley saying, “That’s the plan.” Cruise would not only be the first actor to shoot a movie in space, he could also become the first to do a space walk, because as you probably know, he famously does his own stunts.

The world’s largest Pokémon collection is expected to fetch a whopping £300,000 (US $343,000) at auction Oct. 18. An anonymous superfan spent 25 years building her collection, including more than 20,000 pieces of Japanese memorabilia, such as toys, cards, computer games and even themed toilet paper. The 33-year-old’s amazing collection was crammed into her home in England. She says her bedroom was bursting with hundreds of the anime cuddly toys, models, clothing, badges, flannels and posters. She was awarded a Guinness World Record in 2009 when her Pokémon collection reached 12,000 items, and it has since grown to more than 20,000. The proud owner, who is selling her “life’s work” for financial reasons, says at one point, her mother had to move from the largest to the smallest room in their house to make room for the possessions.

It’s definitely one of the guilty pleasures of parenting; hunkering down with your kids after a long day to watch TV. But maybe, we shouldn’t feel guilty about it at all. According to a new study, watching television with your kids is actually beneficial. Researchers from the University of Portsmouth and Paris Nanterre University delved into findings from 478 studies over the last 2 years about early exposure to television. While they concluded that too much exposure to screens at an early age can be detrimental to development, they also found that some screen exposure can be beneficial, depending on the context. They say the presence of an engaged family member who talks with them about what’s on screen can enhance their understanding of the content, and help reinforce their learning during educational programs.

If you yelled for 8 years, 7 months and 6 days, you would produce enough energy to heat one cup of coffee.

A turtle’s shell is sensitive enough to feel a twig brush across it.

There are an estimated one trillion bacteria . . . on each of your feet.

Question: Nearly 80% of women agree: THIS is one of their biggest regrets from high school. What is it?

A man who spent $150,000 and traveled 75,000 miles (120,000km) to 100 countries to find the world’s worst public toilet says he has finally found it — in Tajikistan. Travel writer Graham Askey – known as “King of the Porcelain” – scanned the globe for the most disgusting loos, and says he has found the “perfect hell hole” – a ramshackle tent that is so bad, those desperate enough to use it must scurry over sun-dried poo. But the “most repellent thing of all”, he says, is that its fabric walls are used as toilet paper. Apparently, some ‘wall’ sections have been torn off and discarded on the cubicle floor. Graham says there’s also a danger of disturbing deadly snakes and fearless rats, which have made their homes in the nearby rocks. Other loos that made his list of the 36 ‘crappiest crappers’ in his new book “Toilets of the Wild Frontier” include a sink in Bangladesh, a bath containing “liters of number ones and twos” in China – with the plug left in, and a wooden chair with a toilet seat in Benin — which is perched prominently upon a raised platform in the middle of the village. https://www.thelondoneconomic.com/

A British woman shared on Instagram the amusing tips she found in a magazine from 1958, in a feature detailing 129 ways to find a husband. Here are some highlights – or rather, lowlights… (How times have changed!)

✓ #17. Be nice to ugly men because handsome is as handsome does.

✓ #23. Go to all your high school reunions because there could be widowers there.

✓ #30. Learn to paint and set up an easel outside of an engineering school.

✓ #25. Go back to your home town because a wild boy next door might now be an eligible bachelor.

✓ #40. Stand in the corner and cry softly because they’ll come over and ask what’s wrong.


I had plastic surgery last week – I cut up my credit cards. - Henny Youngman