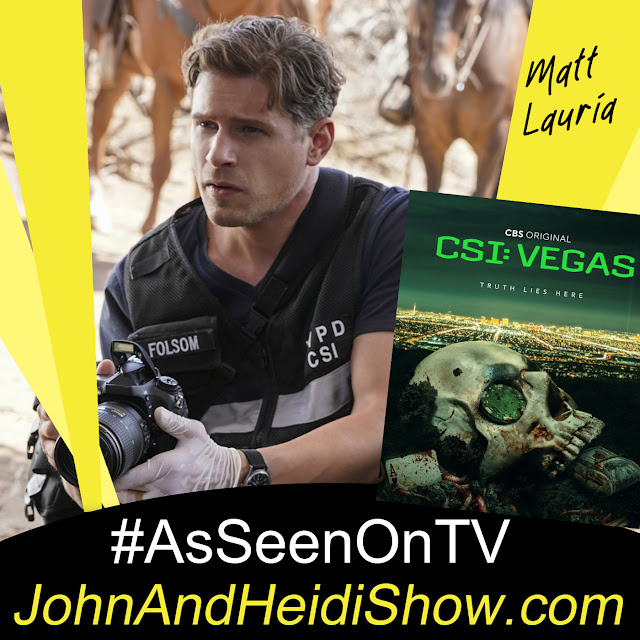 Today we visit with Matt Lauria. He made his television debut on the NBC sitcom 30 Rock in 2007. He's best known for his roles as Luke Cafferty on the NBC/DirecTV drama Friday Night Lights, Ryan York on the NBC family drama Parenthood, and Ryan Wheeler on the Audience drama Kingdom. Matt is now working at CBS as Josh Folsom on CSI: Vegas.

A new threat has enshrouded the neon streets of Sin City, and it’s going to take some familiar faces to stare it down. William Petersen and Jorja Fox return to the roles they made famous — and to the crime drama that made CBS history — in CSI: Vegas. Together can they prevent the perpetrator from bringing down the whole CSI crime lab? Old friends meet new enemies — and the latest forensic techniques — in CSI: Vegas.

For every 2,000 steps you take each day, your risk for premature death falls by 8-11%, according to research published in the journal JAMA Internal Medicine. Researchers found that walking more, accumulating up to about 10,000 steps a day, is linked to a reduction in the occurrence of cardiovascular disease (including heart disease, stroke and heart failure), 13 types of cancer and dementia. But better health isn’t all about step count. The researchers also found that walking at a faster pace helps ward off those same health concerns, beyond the benefit accrued for the number of daily steps.

According to new research, teenagers, regardless of gender, are prone to risky behaviors like cellphone use and speeding while driving. University of Pennsylvania researchers found that among studied teen drivers, speeding occurred during roughly 40% of trips, while handheld phones were used by teens while driving just over 30% of the time. Even worse, teens used a cellphone while speeding during 5% of trips. On average, teens were 17.3 years old, and had held a driving license for 8 months.

John Stamos says he couldn’t imagine filming a “Full House” reboot without Bob Saget. Saget, who played ‘Danny Tanner’ on the sitcom – passed away in January at 65, and Stamos admits he’d be reluctant to shoot a reboot after the death of his former co-star. Quote: “It’s just not the same without him. There’s something missing, there’s a piece missing.” He mentioned that there have been several tributes to Saget, including one he participated in on Netflix, and “We’ll continue to do tributes to him, but I don’t know about a Full House one, though.”

Cher’s massive Malibu mansion, a place she’s called home for decades, is hitting the market — at a price fitting for an icon. She has listed the stunning home for a whopping $85million, an incredible bump from the $2.95 million she bought the place for in 1989. The Italy-inspired home took 5 years to build, and features just about all the amenities you can imagine. It sits on 1.7 acres, and opens with 40 Palm trees complete with a courtyard and a fountain. The main residence has 7 bedrooms, a primary suite with a meditation room and 2 closets, an indoor/outdoor, gym and a home theater. According to legend (and it’s Cher, so believe it), there’s also a climate-controlled wig room with up to 100 hairpieces. The whole thing overlooks the Pacific Ocean.

Abigail Breslin is has opened about a painful chapter from her past to mark National Domestic Violence Awareness Month. In an Instagram post, the 26-year-old “Little Miss Sunshine” star revealed that she “was in a very abusive relationship for close to 2 years”, during which she “was beaten on a regular basis, locked into rooms and forced to pretend everything was ok…while dealing with intense injuries”, which she hid with concealer and “caked on foundation.” After thanking friends and family who have supported her, she admitted she still experiences PTSD, but is now “in a wonderful, healthy, happy and amazing relationship” with her fiancé.”

King Charles is selling 12 of Queen Elizabeth’s racehorses. The monarch inherited his mother’s stable after she died last month, but he’s planning to cut her racing operation and will be getting rid of almost a third of the 37 equines she entered into races this year at auction later this month. A source says that the connection between the royal family and the horse racing industry will continue, “but not on the same scale as Her Majesty because she had a passion.” There’s apparently talk the Royal Sandringham stud in Norfolk – which has 60 racehorses and 38 brood mares – may move toward “winding down” the breeding operation until it is no longer a commercial endeavor.

The parenting site Emma’s Diary has revealed its list of the “most unpopular baby names”, and caused quite a stir on the internet, especially, as you might imagine, among those who bear one of the names on the list. The UK-based blog, which provides parental and pregnancy advice, wrote: “We have put together a list of what some may think are the worst names you could call your baby, but, remember; if you love a name then it doesn’t matter what we think.” According to Emma’s Diary, among the worst names you could possibly give your youngster are: Cletus, Danger, L’Oreal Boomquifa, Elizabreath and Spartacus. They did point out that the list “is meant to be a bit of light-hearted fun and no offence is intended.” Then, it continued to name-shame people blessed with monikers such as Apple, Appaloosa and Arabella. And Jedi, Champ, Chardonnay, and Vejonica. Other names to avoid include Chandler, Justin, Jax, Sonny, Tracy and Lana. Online reaction was mixed, with one person writing: “My baby boy Spartacus was NOT a bad name thankyou!.” Another: “I just can’t believe that anyone in their right mind would call their child one of these names.” And one felt the need to point out: “Lucifer is a beautiful name. The rest not so much.” LINK: https://www.emmasdiary.co.uk/baby-names/worst-baby-names

Animals yawn based on how large their brain is. The bigger the brain, the longer they yawn.

In the Philippines, you can buy spaghetti at McDonald’s.

Another word for junk food is ‘Lubberwort’.

Question: In a survey asking what is unacceptable to wear at a nice restaurant, THIS came in at #1. What is it?

That ‘thumbs-up’ you just texted someone has gotten the ‘thumbs down’. Gen-Zers, who range in age from 9-24, recently caused a stir by calling out the thumbs-up emoji for being “rude” and “hostile”, and even going so far as to say that they feel attacked when they see it used in the workplace. The good news, however, is that I’ve got a list of some other emojis that can help you come across as “more likable.” A recent study conducted by Adobe surveyed 5,000 emoji users from the US about why and how they are using the symbols when instant messaging. It found that the emoji ‘blowing a heart kiss’, the ‘blushing smiley circled by hearts’ and the ‘heart-eyed emoji’ were rated as the top 3 emoticons that “make you more likable.” But it should be pointed out, those ones aren’t so good to use in the workplace, for obvious reasons. They’re better saved for flirting. Another tip: The top emojis that “make you less likable” (thumbs-up aside) are the ‘pile of poop’ (which especially holds true for women), the ‘yellow angry face with the furrowed eyebrows’ and (of course) the succulent eggplant.

⇒ Joseph Quinn in “Stranger Things”: The ‘Eddie Munson’ character developed a passionate fanbase in season 4, and his look is easy to put together. All you need is a curly wig, a Hellfire Club shirt, ripped jeans and a denim jacket. (And the ability to play Metallica riffs on guitar?)

⇒ Ryan Gosling and Margot Robbie from the “Barbie” movie: Though the movie doesn’t come out until next year, their neon rollerblading outfits — captured by paparazzi while they were filming – were definitely meme-worthy. You’ll feel totally tubular in ’80s-style workout clothes with matching visors (rollerblades optional).

⇒ Miles Teller in “Top Gun: Maverick”: It was Teller’s character ‘Rooster’, the son of ‘Goose’ from the first Top Gun film, who took over TikTok. Grab a button-down shirt, aviator sunglasses and a fake mustache, and finish it off with a top-volume rendition of ‘Great Balls of Fire’.

⇒ Tatiana Maslany in “She-Hulk”: Simply cover yourself in green paint and sport a business suit to get the perfect balance of superhero and lawyer chic. (Somehow, I don’t think I could rock it quite the way she does!)