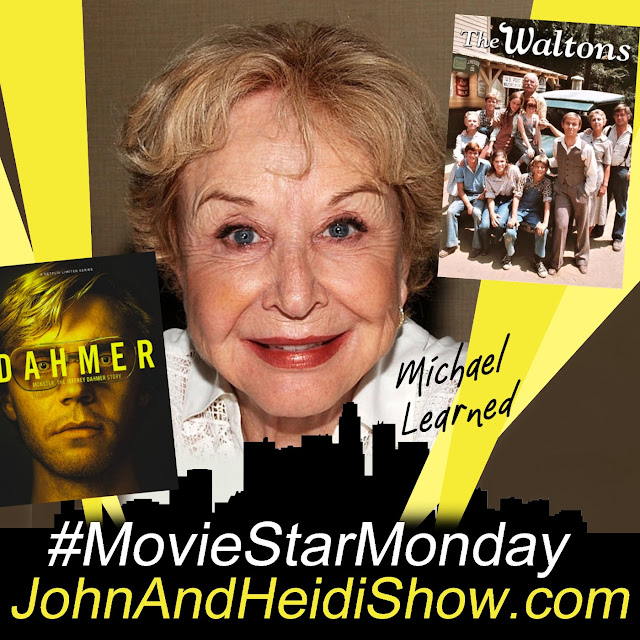 This #MovieStarMonday we visit with Michael Learned. Next month she will be celebrating a special event “50 Years Later” and exhibit opening at the Hollywood Museum with other members of the cast of The Waltons.

She is also the grandmother in the new program “DAHMER - Monster: The Jeffrey Dahmer Story” One of Netflix's most popular TV shows of all time. https://www.youtube.com/watch?v=NVHHs-xllqo

Many of us blame our bad habits on our parents. But it might go back further than that. Waaay further. A group of scientists say they have found that Neanderthal DNA likely contributes to human behavioral patterns around smoking, alcohol consumption and sleeping. An international team, led by researchers from the Estonian University of Tartu, analyzed Neanderthal DNA associations, tracing a wide range of human habits and psychological patterns, and determined that Neanderthals carried multiple variants that substantially increase the smoking risk in people today. They feel that associations of Neanderthal DNA with alcohol and smoking habits might “help us to unravel the evolutionary origin of addictive and reward-seeking behavior.” They say their results require more analysis, but it’s important to note that sleep problems, and alcohol and nicotine use have all been consistently identified as common risk factors for “a range of neurological and psychiatric disorders”.

A new feature on the iPhone 14 alerts police to car crashes — or at least that’s what it’s supposed to do. Police in Ohio were called to the Kings Island amusement park 6 times last month when the new safety feature automatically alerted authorities after mistaking the quick and jerky movements of a roller coaster for a car accident. The iPhone 14’s new crash detection feature is made to be on alert for signs of a crash, including rapid deceleration or a sudden stop, automatically dialing 911 and sharing the location of the device if the user doesn’t shut off an alarm within 10 seconds. The feature has also set off false alarms at Kings Island and Six Flags Great America near Chicago.

Actor-comedian T.J. Miller says he’s not interested in returning for “Deadpool 3” because Ryan Reynolds “hates” him. Miller, who played blunt bartender ‘Weasel’ in the first 2 films, recalled a time when Reynolds allegedly requested another take to belittle Miller in front of the cast and crew. He told Adam Corolla he was taken aback when Reynolds said: “You know what’s great about you, Weasel? You’re not the star, but you do just enough exposition that it’s funny, and then we can leave and get back to the real movie.” Miller said the moment told him all he needed to know about Reynolds, and he wouldn’t work with him again, but he “sorta” wishes him well, “because he’s so good at Deadpool”.

Kim Kardashian is opening her wallet to pay for increased security at her kids’ private school — because Kanye West has blasted the name of the school to the world, creating a heightened security risk. Ye has been trying to get their 4 kids to enroll at his Donda Academy, and Instagrammed the name of the school where the kids are currently enrolled, and that means any random person now knows exactly where the school is located. In addition, West made a lot of people angry over the last week, wearing his “White Lives Matter” shirt, and making an incendiary comment about school shootings. Sources with direct knowledge say the school recently hired additional security as a precaution, and Kardashian is footing the bill.

Conan O’Brien can break out the bubbly — because he just made a fortune on his oceanfront home. He had listed the property in Carpinteria CA, just south of Santa Barbara, for $16.6 million in July. The 2,400 square foot pad is just steps from the sand, and underwent an extensive remodel after he and his wife Liza bought it in 2015…for a comparatively paltry $7.9 million. The house has panoramic ocean, island and coastline views, a large deck with a built-in BBQ and private stairs down to the beach. The main house has 2 bedrooms, a gym and a detached, 2-bedroom guest house with a wraparound deck.

Scientists are a step closer to their goal of developing a handheld tool, similar to a Breathalyzer, that can detect THC on a person’s breath after they’ve smoked marijuana.

A video showing a man taking a rescue camel to In-N-Out burger’s drive-thru in Las Vegas for French fries has gone viral. https://abc7chicago.com/camel-caught-on-video-las-vegas-in-n-out-burger/12308882/

A Johnny Depp impersonator was caught scamming a woman out of $40,000.

A surveillance video from a fire station shows a woman who decided not to step over a hose, but to lift the hose over her head... you can tell in the video that this perplexed the fireman washing the truck! The video has gone viral. https://www.facebook.com/reel/607289884187942/

Video of a delivery person has gone viral, but for a pretty awesome reason. The person getting the package left a note that said they were expecting a package with a shark costume to surprise their dog for the dog's birthday. They left some cash and a key under the door mat. The driver put on the costume and went inside to play with the puppy for a bit. VERY ADORABLE. Many online think the whole thing was fake. You can decide for yourself. https://www.facebook.com/reel/769193320985010/

The inventor of the Chocolate Chip Cookie sold the idea to Nestle in return for a lifetime supply of chocolate.

In ancient Egypt, pillows were made of stones.

In the Middle Ages, chicken soup was considered an aphrodisiac.

There are about 500 species of fish capable of producing electricity.

Google, Apple, Disney and Amazon were all started in home garages.

Question: 2% of people say they that if they won the lottery, they would do THIS. What is it?

Answer: Physically roll around in the money

An incredible flower-shaped sustainable city is being built, which is being called “the most walkable on earth”. Plans are for the city, called “XZERO”, to be the world’s largest net-zero community, allowing 100,000 Kuwaiti residents to live in balance with nature. Construction is set to start in 2024 on the city, which will provide food and energy security while promoting a green “circular” economy in an eco-friendly destination for living, working and visiting. Designed in a flower-shaped pattern, which limits vehicular access, XZERO maximizes landscape ratio, to create a very walkable city. The central area is surrounded by “hubs”, dedicated to education, entertainment and medical facilities. More than 65% of the land area consists of open spaces, such as sports fields, courtyards, permeable pavements, and landscape areas. UAE-based designer URB says these areas will promote social activities, biodiversity and microclimate optimization which will also mitigate the effects of rising temperatures and urban heat islands.

A CELEBRITY NO ONE CAN DISLIKE:

An AskReddit thread posed that exact question, and here’s what people had to say…

✪ “Steve Buscemi. During 9/11, the man went down to his old firehouse and volunteered. A (blank) hero!”

✪ “Julie Andrews. I’ve met her, had a cup of tea with her in her house. Every bit as charming and as personable as you could ever imagine. The definition of a class act.”

✪ “John Candy. The warmth, love, and honesty he brought to all of his roles was second to none. If I die and go to heaven, it will be walking into a warm bar on a cold day and John turns to me with that big smile and offers me a beer and a seat next to him.”

✪ “Rick Moranis. I mean, the guy literally gave up his acting career to be a full time Stay-At-Home Dad when his wife died.”

✪ “LeVar Burton. Great actor, host of a treasured children’s show, and never involved in any kind of drama from what I can remember.”

✪ “Dolly Parton. She has an amazing sense of humor and is so approachable and kind. When there was a fire in Pigeon Forge TN and many were displaced, she gave families money for a certain amount of time.”

✪ “Keanu Reeves. He was at Comicon and the room adored him. Everything I’ve read or heard talking about him is positive.”

✪ “Mr. Rogers. Anyone in Pittsburgh will beat your a** for saying something negative about Fred Rogers. Even the nuns.”