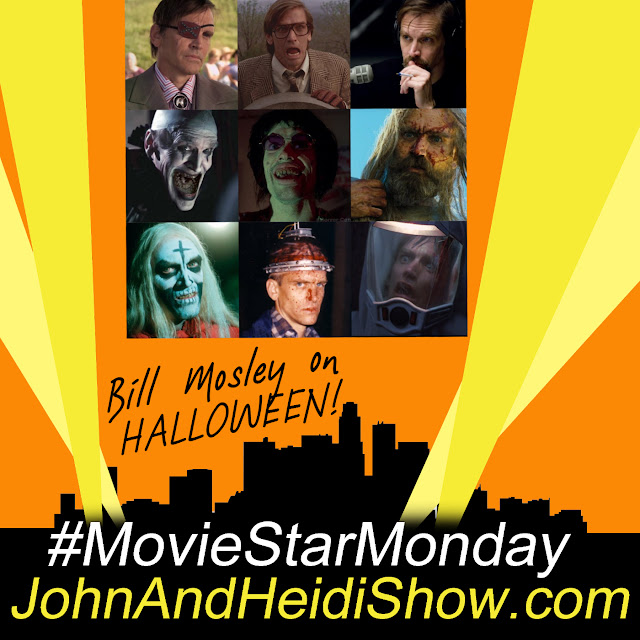 This #MovieStarMonday we visit with Bill Moseley about his many Horror Movies on this HALLOWEEN edition!

Do you wear the same costume every year/most years?

In your opinion, which of the following are the most overused Halloween costumes?

Researchers have found that songbirds help reduce anxiety and feelings of paranoia among people. In a study of 295 participants, a team from the Max Planck Institute for Human Development in Germany examined the impact of hearing birds versus various traffic sounds. Although birdsong did not positively impact levels of depression, it did ease the severity of other mental health issues. Conversely, traffic noise was shown to worsen depression.

He sure knows how to “Rock” the box office. Dwayne Johnson’s “Black Adam” looks to have claimed the top spot on domestic movie charts, ahead of fellow new release “Ticket to Paradise.” Black Adam landed a $26.8 million opening day, including $7.6 million in Thursday previews. The DC Comics adaptation debuted in 4,402 North American theaters. An opening weekend gross of $62.2 million was projected for the superhero flick, which would mark the first wide release to debut above $50 million since Disney’s “Thor: Love and Thunder” bowed to $144 million in July. Second-place “Ticket to Paradise” was projected to nab a $16 million opening weekend.

Halloween begin life as an ancient Irish festival where the dead would come back to the world of the living for one night only. But where did they get this belief? Well, around the same time every year, the wild mushrooms that grow in Ireland go through a chemical change making them “magic mushrooms”.

The people, seeing ghosts and ghouls now walking the streets due to the hallucinations they were experiencing.

To keep them away from the home, they places a carved turnip at their doorstep, the face of the turnip was the face of a man known in Irish folklore as Stingy Jack.

Stingy Jack was a bit of a con artist and a messer.

One night after Jack was telling of his misdemeanours while drinking with friends, whilst walking home he came across a body lying in the street.

When he turned the body around, he instantly recognised the face as Satan’s.

To cut a long story short, Jack tricked Satan 3 times into not taking his life.

When he eventually did die 10 years later, neither Satan nor God wanted jacks soul.

He was left to roam the world as a spirit.

Putting him outside the door warned off other spirits as they did not want to be tricked by Jack.

Fast forward through the years and as the Irish move in large numbers to America, they keep the tradition.

But there aren’t many Turnips in America. So instead they begin using pumpkins.

Then, as it was an Irish thing to do, the others in America begin calling Jacks face a “Jack-o'-lantern”.

The “O” being placed there to go with the tradition of Irish surnames.

The human skeleton renews itself every 10 years. Essentially, you have different bones now than you did 10 years ago!

One in 10 people in the world live on an island.

The world average annual egg consumption per capita is 230.

In the Western World, people move on average every 7 years.

The melting temperature of bubble gum is 125° Fahrenheit (52°C).

It would take a manned rocket ship 70,000 years to reach the next closest solar system.

Question: A survey found that the average family has 300 fights a year over little things. What is the #1 reason?

Answer: Kids refusing to put down gadgets and talk

(Funny tweets about our love/hate relationship with candy corn…)

❑ Parents PLEASE be sure to inspect your kids bags of candy before they eat them. Some twisted people out there might put candy corn in them -@victorpopejr

❑ The internet has taught me so much. Like did you know there are people who hate candy corn and also that civilization is crumbling around us @LurkAtHomeMom

❑ FACT: Candy corn is made out of melted down traffic cones. @SwisherGirl

❑ Mike Leach on the great candy corn debate: “It’s like fruitcake. There’s a reason they only serve fruitcake once a year.” @TheoLawson_SR

❑ I’m pro-pumpkin spice and anti-candy corn. These are my firm beliefs and I simply ask that you respect them during these trying times. @AngryBlackLady

THAT ARE NOT COOL AFTER AGE 30:

According to an AskReddit thread…

☞ “Bailing on plans last minute. If you don’t want to do something, just say so.”

☞ “Anything loud. I’m finding that anything loud (voices, music, TV, etc.) is turning into noise for me. I’m surprised by how much my tolerance for ambient sound has drastically decreased.”

☞ “Being cool. At around 35, everyone…started realizing that all the things I thought were cool when we were 20 are actually really, really dumb and unimportant and we weren’t interested in them anymore.”

☞ “Anything that is called an “afterparty.” I am barely going to make it to the party, son.”

☞ “Night shift. I abused my 20s to it’s limit and (messed up) my sleep schedule so bad that even several years on days not hasn’t fully fixed.”

☞ “Flakes. As a single entering the dating scene again in my 30s, you could get away with being a flake and playing games in your 20s, but now, you’re just waving red flags in people’s faces.”

☞ “Hangovers. My hangovers really took the turn to the worst somewhere between 25-27. In my early 20s I could drink like a fish, stay up til 3 and wake up at 9 and go to my college class perfectly fine. Now, even when I get 8 hours of bed time (after drinking), the next day is basically ruined.”

☞ “Caring about what other people think is cool after age 30.”

Vaccines to fight cancer could be widely available before 2030, according to the husband and wife team behind one of the most successful Covid-19 jabs. Lessons learned during the pandemic will accelerate cancer treatments based on mRNA technology, say professors Ugur Sahin and Ozlem Tureci. The couple co-founded BioNTech in Germany, in 2008, to work mainly on cancer. When the pandemic hit, they changed focus to create a vaccine, working with pharmaceutical giant Pfizer. The mRNA Covid vaccine works by ferrying genetic instructions for essentially harmless spike proteins on the Covid virus into the body, where the immune system’s antibodies learn what to search for and attack. The same approach can be taken to prime the immune system to seek out and destroy cancer cells, according to Tureci.