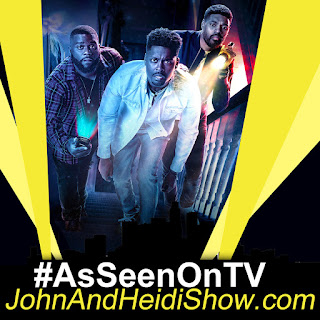 Today we talk with best friends and ghost hunters – Dalen Spratt and Juwan Mass about their Discovery Channel series, “Ghost Brothers: Lights Out” and Fright Club.

National Speak Up for Service Day

Do you really take one or do you take more than one or all of the candy?

I take all of the candy (One percent)


Do you give out full-size candy bars?

Do you decorate your home for Halloween?

Do you make or buy your costumes?

Make it myself (35 percent)

A team of Japanese researchers has successfully grown mature hair follicles in a lab, a big advancement in the battle against hair loss. Scientists from Yokohama National University generated hair follicles in petri dishes using embryonic skin cells from mice cultured in a special type of gel. In the lab, the hair shafts grew to 3 millimeters over the course of 23 days.

HBO’s “House of the Dragon” season finale leaked online Friday ahead of its Sunday night release. In a statement, HBO said the finale was posted to illegal torrent sites, and “appears to have originated from a distribution partner in the EMEA region,” referencing Europe, the Middle East and Africa. The network noted that it is “aggressively monitoring and pulling these copies from the internet.” HBO ended its statement by saying: “We’re disappointed that this unlawful action has disrupted the viewing experience for loyal fans of the show, who will get to see a pristine version of the episode when it premieres Sunday…exclusively in 4K”.

The “House of the Dragon” bosses are promising the second season will deliver more of the thrills and spills familiar to the millions of Thrones fans tuning in, along with more humor along the lines of the original series. Dragon showrunner Ryan Condal said that producers deliberately slowed down the narrative for the first season, to ensure viewers were invested in the new characters. Quote: “We will get to the spectacle. But you have to understand these people’s complexities before they’re thrown into war.” Condal promises there will be more lighthearted moments too in the next season, when the writers introduce “natural pathways into moments of levity” in the drama.

A man set a NYC restaurant on fire over a botched chicken order.

A coffee shop in the UK has made the news for charging rude customers more than DOUBLE for coffee.

A study found that alcohol works as an antidepressant.

A report says that Americans will spend over $8 billion celebrating Halloween.

Until 1937, the referee tossed a jump ball after every basket in basketball.

There is no evidence that stretching before exercise reduces the risk of injury.

As a child, Houdini often broke into his family’s locked cookie cupboard.

There’s no mercury on Mercury — most of it is solid iron.

It is theoretically possible to dig a hole to China…if you start digging in Argentina.

Question: According to a survey, it takes us an average of 24 minutes to do THIS each day. What is it?

Answer: Get out of bed

The family of late “Crocodile Hunter” Steve Irwin is opening its iconic Australia Zoo grounds for couples wishing to pop the question or get married. Bindi Irwin, herself a TV personality and conservationist, and her husband Chandler were hitched at the Sunshine Coast venue in March 2020. Her parents Steve and Terri Irwin actually met at the zoo and also married there in 1992. The website for the facility, known for its lush grounds and exotic scenery, says: “Whether you are looking for a small, intimate experience or a larger scale event, Australia Zoo is the perfect location for your wedding celebrations.” Couples can choose from a number of packages to plan their big day to perfection…

• “The Enchanting Elopement” package is available for up to 40 guests and is also suitable for vow renewals.

• “The Closest Thing To Heaven” ceremony package gives brides the chance to walk down the aisle with kangaroos jumping past and exchange vows underneath gum trees.

• And for those who are yet to pop the question, there are special packages available to create a unique proposal experience at the zoo.

All packages include a personal wedding planner to help curate the event.


“When all else fails, there’s always delusion.” – Conan O’Brien