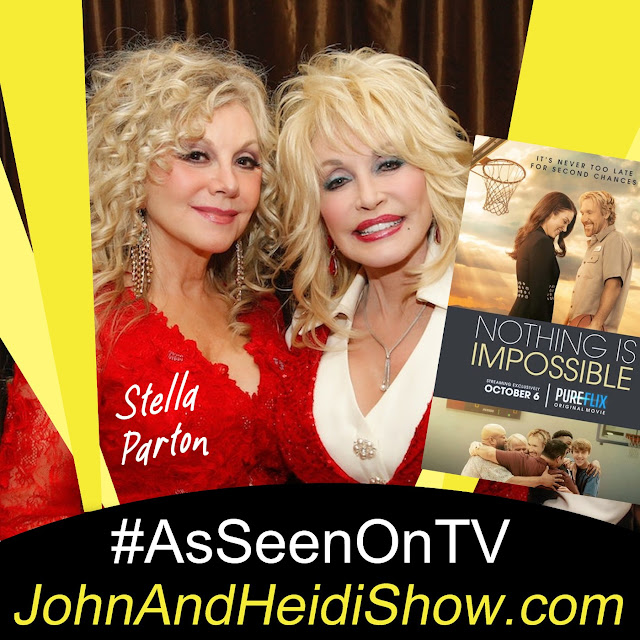 Today we visit with Stella Parton, a singer, songwriter, producer, author and actress - since her debut chart topping album "I Want to Hold You (In My Dream Tonight), Stella has released 39 albums and author of three cookbooks and an inspirational memoir "Tell It Sister, Tell It." She and her sister Dolly are very close and have worked together on numerous projects over the years.

Stella is in a new film on PureFlix called “Nothing Is Impossible” an inspirational movie about second chances and how past failures don't define our futures.

"Nothing is Impossible" is an inspiring movie where you take a center-court seat to a journey of transformation as Scott Beck gets a second chance at life and love. Can he let go of past pains and open himself to God's purpose? Or will new challenges keep him from the future he always hoped for?


Got dinner plans? Hopefully yours involve being at home with those closest to you. The secret to easing stress be as simple as having dinner as a family, according to researchers with the American Heart Association. They report that 91% of parents notice their families are less stressed when they share meals together. In a poll of 1,000 adults, 84% said they wish they could share a meal with loved ones more often. But adults eat alone roughly half of the time. Two-thirds (65%) say they’re at least somewhat stressed and 27% are very stressed. The AHA points out: “Sharing meals with others is a great way to reduce stress, boost self-esteem and improve social connection, particularly for kids.” And remember, chronic stress can also increase your risk of heart disease and stroke, so it’s important to reduce and manage stress as much as possible. The survey also found that many people believe sharing a meal has additional health benefits, including providing a reminder of the importance of connecting with others. More than half (54%) say sharing a meal reminds them to slow down and take a break. And nearly 6 in 10 feel they make healthier food choices when they eat with others.


Prince William has lost his crown…as “world’s hottest bald man”. A light-hearted study by Reboot SEO Agency took into consideration over 2.4 million tweets, plus facial analysis and the “cranial shine factor” of multiple celebrities (ie how shiny their heads are). This year, Vin Diesel took the top spot as the sexiest follicly-challenged male on the planet, dethroning the Prince of Wales, who has taken the accolade for the previous 2 years. In second spot this year is ever-popular actor Stanley Tucci.


Blake Shelton, the last of the original judges on “The Voice,” will leave the hit singing competition show after next season. In a statement, the country star said: “This show has changed my life in every way for the better and it will always feel like home to me.” He said he had been “wrestling with this (decision) for a while.” The next season will be the NBC show’s 23rd and Shelton’s last. When it premiered in 2011, Shelton was joined in the big red chairs by Adam Levine, Christina Aguilera and CeeLo Green. Celebrity judges like Pharrell, Shakira and Miley Cyrus rotated in and out for subsequent seasons, but Shelton had been the sole constant. The show is also where Shelton met his wife, pop star Gwen Stefani. The No Doubt frontwoman joined the show in 2014 for its 7th season and the pair began dating the next year, after Shelton divorced Miranda Lambert and Stefani divorced Gavin Rossdale. Shelton and Stefani were married last year.

Marvel Studios will need more time to bring vampire hunter ‘Blade’ back to the screen. Two weeks after director Bassim Tariq left, Marvel is putting the project on hold while the studio searches for a replacement. The film will star Mahershala Ali as the title character, previously played by Wesley Snipes in the 1998 film. Blade was expected to start filming in November, with production teams already preparing the shoot in Atlanta, but Marvel has temporarily shut down all activities related to the film. Disney planned to release the movie in Nov. 2023, but it has been delayed to Sept. 6, 2024. The delay created a domino effect: “Deadpool 3” has been moved back from Sept. to Nov. 2024, while “Fantastic Four” will now open on Feb. 14, 2025. “Avengers: Secret Wars” has been rescheduled to May 1, 2026.

In its third week atop the Netflix Top 10, “Dahmer — Monster: The Jeffrey Dahmer Story” has become the streamer’s second most popular English-language series of all time. With 701 million hours viewed, the fictionalized (and heavily criticized) story about the infamous serial killer is topped only by “Stranger Things 4,” which has notched 1.35 billion viewing hours. The limited series from Ryan Murphy and starring Evan Peters has been steadily dominating Netflix’s charts since its release on Sept. 21. Last week, the show cracked the Most Popular List of English shows in 9th place after just 12 days.

According to industry analysts, the movie “Amsterdam” stands to lose anywhere from $80-$100 million at the box office.

It’s been over 6 weeks since Kim Jong-Un appeared in public.

I just read that a brain gets in good shape by memorizing music.

An 80-year-old Mississippi woman was arrested on drug charges.

The term “astronaut” comes from Greek words that mean “star” and “sailor.”

Originally, bumper cars were not supposed to hit each other. Drivers were supposed to avoid crashing in spite of chaotic driving. The first company to patent bumper car was called “Dodgem” (1920).

Zebras have only one toe on each foot.

Ancient Roman surgeons were trained to block out the screams of human pain.

Question: Hey guys, if you want your woman to do more of THIS, marry her don’t just live with her.

A California ophthalmologist recently shocked followers by posting a video of herself extracting 23 forgotten contact lenses from a patient’s eye. Katerina Kurteeva, an eye doctor in Newport Beach CA, posted an Instagram video of herself carefully removing the contact lenses from a woman’s eye. The patient had forgotten the lenses in her eye for months, possibly years. The video went viral, leaving millions scratching their heads about someone could simply forget that many contact lenses in their eye.

5 TYPES OF DAYS YOU CAN HAVE, AS AN EMPLOYEE:

Your workdays can’t simply be classified as good or bad, according to researchers at Virginia Commonwealth University. They looked at 11,245 workday surveys taken by 221 office workers, discovering that workers tend to cycle through 5 different kinds of days…

➠ Typical: Typical days make up 24% of work days. These are generally forgettable days, where creativity is at an average level, and you are motivated enough to be mildly engaged with your work. (Sounds like an “above-average” day for me!)

➠ Ideal: They make up 29% of your days. These are your productive days, filled with freedom, challenging work, and support from management. (And free pizza for lunch!)

➠ Crisis: You’re familiar with these. Some good things happen — like engaging tasks — but there are even more problems present. In 19% of work days, something erupts in disaster. You may think you’re doing productive work, but chances are you’re not. (Oh – Mondays!)

➠ Disengaged: If you’re feeling “checked out” at work, you’re experiencing a disengaged day. These happen 10% of the time. There are neither pressures nor motivators present, and you just feel bored and unmotivated. (Oh – Mondays also!)

➠ Toxic: 8% of days are toxic days. A challenge or conflict combined with a poor work environment can lead to one of these very bad days. Emotional conflict in particular will do more damage to your day than a task-related conflict.

Have you noticed that all the people in favor of birth control are already born? - Benny Hill

A Cairo supermarket is taking its produce aisle to a new level of freshness. A hydroponic fridge grows different kinds of lettuce right there in the store, ensuring that no one can complain about freshness or travel distance. A hydroponic system grows certain plants in humid tubes without soil, supplemented with liquid fertilizer and nutrients. The system uses 90% less water than soil gardening, and is perfect for fast growing greens. The company, known as Schaduf, hopes to expand the technology to other stores to help reduce the carbon footprint of travel associated with fresh fruit and vegetables.