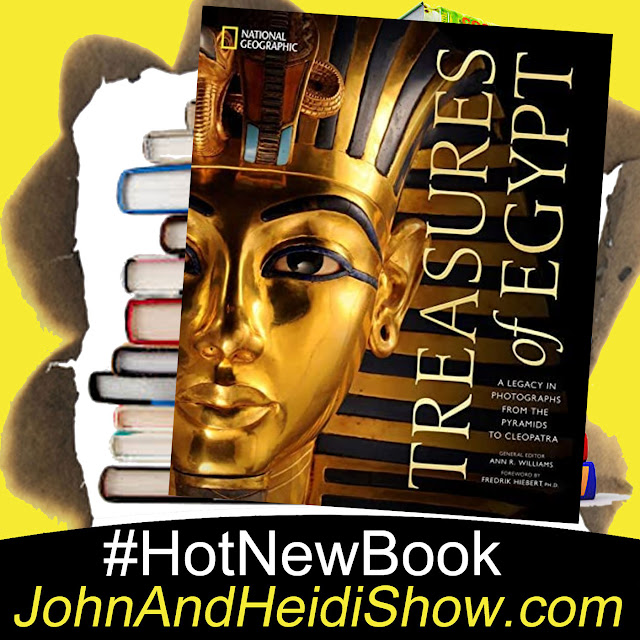 Ann Williams - Treasures of Egypt: A Legacy in Photographs from the Pyramids to Cleopatra. Available in time for the 100th Anniversary of the discovery of King Tut's tomb on November 4th. AVAILABLE NOW - https://amzn.to/3zABeOr

Some experts are saying that says that letting your kids gorge on Halloween candy might, in the long run, be good for them. Carol Danaher, a registered dietitian and faculty member at the Ellyn Satter Institute, points out that Oct. 31st is a “special day” meant for children’s enjoyment, and “If they are restricted from sweet food or there’s guilt around them, the child will crave them more and they won’t have their natural limits.” Sarah Jedd, a blogger and communications professor at the University of Wisconsin, wrote a piece for a local mommy site explaining why she allows her children total access to their Halloween candy. Although she admits she received a lot of negative feedback, she stands firm in her convictions. The mom-of-5 says she doesn’t place limitations on her family’s candy consumption so that they ultimately eat less of it. They tend to dig into their trick-or-treating haul for a few days and then simply tire of it. She feels kids are “naturally intuitive eaters” and “will figure out what is good for them.”

So, do your kids have any Halloween candy left in their stash? According to a OnePoll survey, 81% of kids end up eating their entire candy haul within the first week. And 1 in 4 kids’ candy stocks didn’t even make it through to today. Another poll, conducted in 2019, found that two-thirds of parents admit to stealing some of their kids’ Halloween haul. And we’re not talking about just a few pieces of candy, either. Among those who helped themselves, the average parent ate a full THIRD of their child’s Halloween candy.

Another person close to the royal family has added their voice to those criticizing “The Crown”, as the 5th season’s arrives on Netflix. The Times quotes an unnamed female friend of the royal family, who attended the Queen’s private committal service at Windsor last month, as slamming the streamer’s editorial decisions, saying they are “vilifying the royal family. It is vicious. It’s as if they’re trying to destroy the royal family.” Of Prince Harry’s current big-budget partnership with Netflix, she added: “If I had my family being vilified like that, I wouldn’t take a penny [from Netflix].” This follows a number of others speaking out in the lead-up to the new series, which will cover a number of events in the mid-1990s, including the marriage breakup of the Prince and Princess of Wales. The streamer has included a disclaimer to The Crown’s season 5 trailer, stating the show is “inspired by real events”, but is a “fictional dramatization”.

Sunday night was a big night for the “Game of Thrones” prequel series, “House of the Dragon.” The HBO broadcast for the dark fantasy series brought in 9.3 million viewers for its 10th episode. The first season finale for the smash-hit series drew bigger numbers than all but 2 seasons of “Game of Thrones” in total viewers overall. While the finale did not draw as high as the first couple of episodes this season, it’s still the biggest audience for an HBO season finale or series finale since “Game of Thrones” ended its run back in 2019.

Dwayne Johnson is praising fans in the wake of “Black Adam” launching to $67 million at the domestic box office and $140 million worldwide. The movie marks Johnson’s biggest box office opener in the US as a leading man. While Black Adam was widely panned by critics (its Rotten Tomatoes score is 39%), audiences love it. Johnson tweeted: “A huge THANK YOU to the fans for our amazing 90% audience score (on Rotten Tomatoes) for ‘Black Adam’. Highest audience score for a DC theatrical film since ‘Dark Knight.’ As always, the fans matter most and we’re always committed to deliver for them. So make sure you stay til the end credits.”

Elon Musk is officially Twitter’s new owner — at least according to Elon Musk — who says he hopes the platform will continue to be a digital town square for years to come. The Tesla/SpaceX boss explained his reasons for the $44 billion purchase Thursday, saying, “There is currently great danger that social media will splinter into far right wing and far left wing echo chambers that generate more hate and divide in our society.” He claims the reason he bought the social media site is to preserve the opportunity for dialogue that traditional media doesn’t provide. Quote: “I didn’t do it because it would be easy. I didn’t do it to make more money. I did it to try to help humanity, whom I love.” Musk’s Twitter bio now reflects his new purchase as well, referring to him as the “Chief Twit.”

Elon Musk has amended Twitter’s proposed verification plans from a $19.99 charge per month to an $8 monthly fee, along with several premiere features for blue-check users. Verified users on Twitter may soon have to pay to retain their coveted blue tick badges, as the company’s new owner Elon Musk looks for ways to generate additional revenue for the platform. In his usual vague way, the new “Chief Twit” tweeted on Sunday that the “whole verification process” is being revamped, without giving any details. It’s been reported that Twitter will charge US $19.99 for an upgraded Twitter Blue subscription and currently verified users (those with the check marks) will have 90 days to sign up before they lose their verified badge. Twitter Blue is a feature for verified users, those with a blue tick, that unlocks additional features. According to the report, the new feature will launch as early as next week. It’s unclear how this change will apply to verified accounts of government institutions, political leaders or companies, although Musk has indicated he wants to charge these entities to use Twitter.

The world seems quieter right after a snowfall because the blanket of fresh powder absorbs sound, making things seem “calmer.”

The day after tomorrow is called “Overmorrow.”

The probability of you drinking a glass of water that contains a molecule of water that also passed through a dinosaur is almost 100%.

Question: THIS type of character makes the best spooky movie or TV villain, according to a survey. What is it?

Answer: Vampire (followed, in order, by Zombie, and Clown)

Yet another farewell tour has seemingly been announced. Only in this case, it’s the final go-round of a classic fast food menu item. McDonald’s has announced that the McRib will soon return – possibly for the last time. The chain said the fan-favorite is coming back in the US on October 31 for a limited period – and “this could be your last chance to taste it”. Quote: “Like any true farewell tour, we’re hoping this isn’t a ‘goodbye’ but a ‘see you later.’ Because as our “McRib stans” have experienced time and time again: you never know when — or if — the McRib is coming back.” McDonald’s first added the McRib to menus around Kansas City in 1981. The chain pulled it 4 years later, but it has become a cult favorite over the years, and was occasionally made available, before expanding to all US restaurants in 2020. As part of the (a-hem!) “farewell tour,” McDonald’s is selling a “nostalgic McRib merch line” beginning November 4 in its online store. LINK: https://goldenarchesunlimited.com/

SLEEP MISTAKES TO AVOID, WHICH WILL MAKE THE TIME CHANGE EVEN WORSE:

The clocks go back an hour early Sunday morning (in most of North America and some other countries), and even though it means an extra hour, the adjustment can be difficult. Here are some things that make it even worse…

✗ Using technology before bed: You’ve heard it before. Avoid all screens for at least 30 minutes before turning in. This might require putting your phone on ‘do not disturb’.

✗ Not creating a comfortable sleeping environment: Whether it’s noise, scent, temperature or even your bed sheets, be aware of your sleep environment so you can identify anything that will keep you at night. Fix what you need to fix.

✗ Getting into bed without having a shower or bath: A warm bath promotes sleep quality. Put on some soothing music and add a few drops of essential oil. It’ll also help soothe and relax you after a long day.

✗ Evening workouts: Avoid vigorous exercise for 90 minutes before bedtime. Instead, opt for Pilates, yoga or an evening walk, if you feel the need to expend energy. (You had me 100% onboard until that part about the pilates or the yoga, or the walk!)

✗ Eating before bed: Taking in calories after 8pm not only increases the risk of obesity, it negatively affects sleep. Acid reflux and other stomach problems from eating too late can do the same. (Plus the resultant bathroom break…)

✗ Cranking up the heat: The optimum temperature for good quality sleep is 16-18°C 61-65°F). Anything warmer can impact the quality of your sleep. (This is NOT going to go over well at my house!)

✗ Not investing in winter nightwear: Summer nightwear, such as shorts and night dresses, aren’t appropriate for the winter months. Consider long silk pyjama sets, which preserve warmth, but are lightweight.

It’s amazing that the amount of news that happens in the world every day always just exactly fits the newspaper. - Jerry Seinfeld

A man flew 3,500 miles to surprise his mom on her dream 60th birthday vacation — after managing to keep his plan secret for months. 37-year-old Stanley Dru pretended he was unable to get the money together to join his mom Donna Roderick for her big trip to Dubai. But he secretly planned a surprise arrival with 2 of her friends. He flew to Dubai, then called his mom, asking about her vacation – while creeping up behind her at a restaurant. She “jumped” when she heard Stanley’s voice behind her, telling her the white dress she was wearing “looks lovely” on her, and was in utter shock to see him. The pair were able to spend the next 4 days sightseeing and “made every minute count of the trip.” According to Stanley, he “slipped up so many times” in the months leading up to her trip, but somehow his mother didn’t realize it.