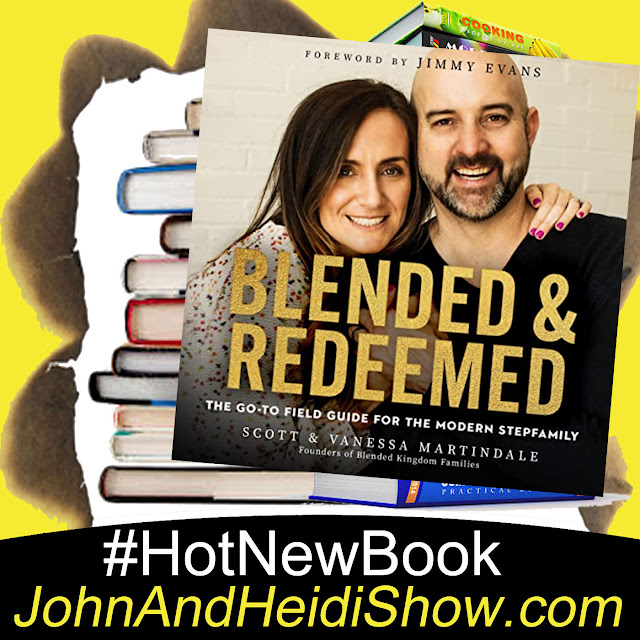 This weekend we visit with Scott And Vanessa Martindale about their new book “Blended And Redeemed” https://www.blendedkingdomfamilies.com/

A survey says that 41% of people believe they’ll return to their ‘pre-pandemic body’ next year. A poll of 2,000 US adults found that two-thirds feel that one good thing about the pandemic is that it taught us just how important our health really is. Since the COVID-19 pandemic began in March 2020, 64% say their physical health was affected — with half reporting that they’ve gained weight in the past 2 years. Of them, 52% gained between 9-20 pounds (4-9kg). About two-thirds say weight loss is a “top health goal” for them over the next year. Almost 3 in 5 believe it will be easier to maintain their health and fitness in the next year compared to 2022.

Humans are naturally attracted to disgusting things! Think of TV shows showing “adventurous eating” or “pimple popping” as examples. Why is that? Psychologist Nina Strohminger says that the pleasurable features of disgust are what has been called “benign masochism” – our tendency to seek out seemingly “negative” experiences so we can enjoy “constrained risks,” such as riding a roller coaster or eating very spicy foods. According to Strohminger, “any negative feeling has the potential to be enjoyable when it is stripped of the belief that what is happening is actually bad, leaving behind physiological arousal that is, in itself, exhilarating or interesting.”

Jane Fonda and Lily Tomlin are getting ‘Grace Hanson’ and ‘Frankie Bergstein’ back together again. The longtime friends and co-stars bantered back and forth on FaceTime as they announced a live “Grace and Frankie” reunion table read scheduled for tomorrow to benefit the Jane Fonda Climate PAC. In the video, 84-year-old Fonda said: “I think we’re on mute. 83-year-old Tomlin fired back: “How can I put just you on mute?” Fonda has been an outspoken climate change activist for years, protesting in Washington regularly and even being arrested at least 5 times during those protests. Last month, when Fonda announced she had been diagnosed with a “very treatable cancer” called non-Hodgkin’s lymphoma, she assured her fans that she “will not let any of this interfere” with her climate activism.

Production of “Call Me Kat” has been paused following the death of Leslie Jordan. The actor — who died in a car crash on Monday at age 67 — played main cast member ‘Phil’, a newly single man who serves as baker at a café owned by Kat (Mayim Bialik). The series, which debuted in 2021, began airing its third season last month. Jordan filmed 9 episodes for the show’s latest season. In a statement, FOX Entertainment called him “the kindest person you could ever imagine.” Tonight’s episode, titled “Call Me Uncle Dad,” will pay tribute to the Emmy winner.

With the news that Netflix will officially begin cracking down on account sharing early next year, a tech analyst says the streamer could someday ask customers to scan their fingerprint or use facial recognition in order to use its service. Ben Wood, chief analyst at CCS Insight, said: “We may see one of the big streaming providers saying ‘we want some biometric proof that you’re there’.” While he doesn’t foresee your smart TV someday featuring a fingerprint sensor, “it could well be that if you want to watch something on a mobile phone, or even if you’re sitting at home, you will get pinged… ‘I want your fingerprint or I want a faceprint to prove that it’s you’.” On Oct.18, Netflix said it will go ahead with plans to “monetize account sharing”. That means primary account holders can create sub-accounts for “extra members” outside their household, at a rate of $4 per month.

By now, you’ve no doubt heard that it’s a good idea to let those fallen leaves lie. It’s a way to give small critters a place to hibernate, it provides a food source for birds, and it’s good for the soil. And a municipality in the Netherlands agrees. Eindhoven is encouraging its citizens to abandon blowers and rakes and to let the fallen leaves in gardens or parks stay there. Council spokesperson Martijn van Gessel said they are trying to change ideas about how public spaces should look. Historically, people have believed that the grass always had to be mowed and tidy, and the leaves collected before winter. The city wants to retire leaf blowers in parks and create a warm, wet, winter leaf layer for insect life – even if it looks messier. The council is also putting out 200 “leaf baskets” around the city and is encouraging people tidying up leaves around their home to deposit them to be diced, mulched and used as compost for city plants next spring.

“Mr.” and “Mrs.” originated from the words master and mistress.

According to research, dogs prefer reggae and soft rock over other music genres.

Eating cinnamon cools your body by up to 2 degrees and maintains the integrity of the stomach wall.

A trip around a baseball diamond is 20 yards longer than a goal-to-goal run on a football field.

Moscow weathermen can be fined for inaccurate weather forecasting.

Question: 12% of people say they plan to do THIS for the holiday shopping season. What is it?

Answer: Get a new credit card

Thanks, science! Robots may soon be able to help us do the laundry and other household tasks, because a new technique has given them the sense of touch. The system, called ReSkin, enables robots to differentiate between objects – such as thin layers of cloth – using only their sense of touch, something that is second nature for humans. Until now, tasks such as grabbing a glass or folding towels have been “extremely challenging” for robots, according to a team at Carnegie Mellon University. To fold laundry, robots need a sensor to mimic the way human fingers can feel the top layer of a towel or shirt and grasp the layers beneath it. The team developed a touch-sensing skin made of a thin, elastic polymer embedded with magnetic particles that give a sense of touch. However, the researchers stress the need for more research before robots are ready to handle a real laundry basket.

Research commissioned for “Clipology”, a new board game that streams clips, and asks players to guess iconic quotations from films and TV shows, has revealed the most misquoted movie line of all time. What is it? “Houston, we have a problem,” from “Apollo 13.” The true sentence from the astronaut in real life is “Ah Houston, we’ve had a problem here.”

Here’s the rest of the Top-10 list of misquoted movie lines:

3. Magic mirror, on the wall, who is the fairest of them all – “Snow White and the Seven Dwarfs”

9. Fasten your seat belts, it’s going to be a bumpy night – “All About Eve”

10. Take your stinking paws off me, you damn dirty ape – “Planet of the Apes”

Money is not the most important thing in the world. Love is. Fortunately, I love money. - Jackie Mason

A Man's Heart Stopped Beating On The Beach. Two Surfers Saved His Life