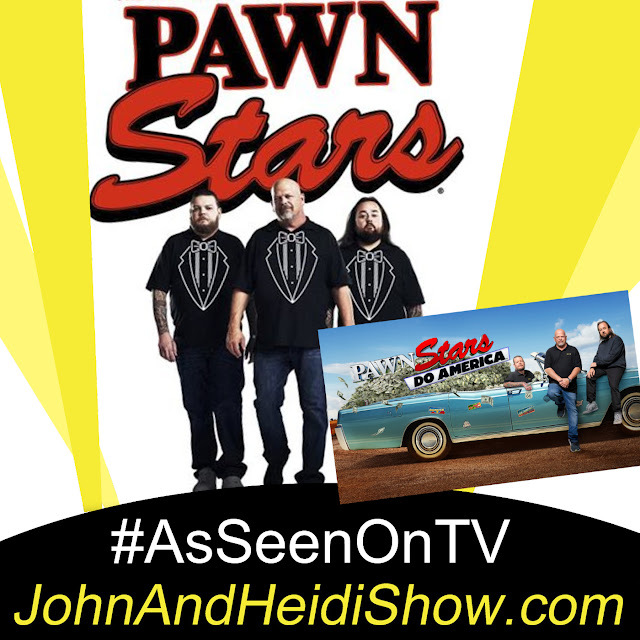 Today we visit with Chumlee from Pawn Stars. We'll chat about their NEW SHOW Pawn Stars Do America! The crew hit the road for an adventure on the American highways! https://www.history.com/shows/pawn-stars-do-america

Not really something to look forward to, but singles can expect cheap dates in the New Year. The dating app Plenty of Fish” has coined the term “infla-dating” after a survey of 8,000 users found a steep 48% of single millennials and Gen Zers suggested going on more budget-friendly dates. It’s not surprising, given recent inflationary pressures and economic indicators. Kate MacLean, a dating expert at Plenty of Fish said: “Singles are feeling the financial pressure, so it’s not surprising that infla-dating, or taking someone on a less expensive, budget-friendly date, will be much more prevalent in 2023.” US Stats show that yearly dating costs shot up to $3,030 in 2022, compared with $2,375 in 2021.

A huge storm in space striking the Earth could lead to an “internet apocalypse” within the next decade, researchers in Australia warn. This radiation would leave people offline for months or even years, knocking out satellites and power lines, their study explains. The mysterious, unpredictable, and potentially devastating event has been mapped for the first time — using tree rings. Forests are a great observatory for cosmic radiation, with an archive going back thousands of years. The scientists calculated that there’s a 1% chance of such an event happening in the next 10 years. Unfortunately, there is no way to predict just when, or how severe it will be.

“Jackass” star Johnny Knoxville has found a new job that does not involve getting concussions every week. He’ll join comedian Eric Andre and “American Horror Story” star Gabourey Sidibe to co-host ABC’s “The Prank Panel”. The trio will take viewers behind the scenes of their elaborate pranks. The Prank Panel will feature people making pitches for ways to prank their family, friends, and co-workers. The “pranxperts” will then bring these elaborate pranks to life as mentors and saboteurs. Celebrity guests will also join in. The series will debut in 2023.

HBO Max has dropped the first full-length trailer of Peter Billingsley in his return as ‘Ralphie’ in the upcoming “A Christmas Story Christmas”, the sequel to the classic holiday pic “A Christmas Story”. The film begins streaming on HBO Max November 17. It follows an adult Ralphie (Billingsley) in the 1970s, who returns to the house on Cleveland Street to deliver his kids a magical Christmas like the one he had growing up. Ralphie reconnects with childhood friends like ‘Flick’ and ‘Schwartz’, encounters childhood bullies like ‘Scut’ and reconciles the passing of his Old Man. LINK: https://tinyurl.com/3b8a9nrv

Ryan Reynolds is very interested in buying the Ottawa Senators NHL team. A source close to the “Deadpool” actor told “People” that, beyond the business opportunity, it is important to Reynolds, who was born and raised in British Columbia, that the team stays in Ottawa, as a sale could result in relocation. The news comes on the heels of rumblings that the team’s board of directors is reportedly lining up for a potential sale. The source says Reynolds has kept his interest in purchasing the team on the down-low until Tuesday when a Twitter user mentioned to him that the team is up for sale and he replied with the ‘hand-on-the-chin interested’ emoji.

Costco is selling a mega jigsaw puzzle that’s 29 feet wide and has 60,000 pieces.

Feds say 484 pounds of bologna and 285 pounds of cheese were seized at the Texas border.

A survey says that over 90% of women get turned on when a guy cries at a wedding.

The Internet imploded over the weekend after Madonna posed nude on Instagram to pay tribute to her “Sex” book era.

If you still have a lonely-looking slightly-used jack-o-lantern or pumpkin sitting on your front porch, hold off on throwing it in the trash. They don’t have to end up in the landfill. Here are a few suggestions:

• Consider composting pumpkins in the garden. Slice it up, add materials such as leaves, sawdust, wood chips or cardboard, and occasionally add water to the compost pile. Turning it over with a rake or pitchfork ensures that oxygen is mixed in.

• Donate them to a community garden, farm or even a zoo, or just leave them as a snack for backyard wildlife. Pumpkin is a meal for many farm, zoo and ‘critter’-type animals. And pumpkin seeds are a tasty treat for a wide variety of birds.

Your tonsils can grow back if there was tissue left behind during the removal process.

Movie theaters make roughly 85% of their profit off concession stands.

In the 19th century, ‘Shirley’ was a popular name for boys.

Question: In a survey, more than 30% of singles said they would lie about THIS if asked about it on a first date. What is it?

Answer: If they snore

A woman is facing charges for hitting a golf ball and a golf club into the Grand Canyon. On October 27, the Grand Canyon National Park’s Facebook page posted a pic showing a woman at the edge of the canyon’s South Rim, near Mather Point, with the golf club in the air. The caption read: “Do we really need to say, ‘don’t hit golf balls into the Grand Canyon?’. It added that “throwing objects over the rim of the canyon is not only illegal but can also endanger hikers and wildlife.” With the help of members of the public, Grand Canyon Law Enforcement “identified, located, and contacted the individual responsible for the incident”, which resulted in 3 misdemeanor charges, each of which could result in a fine of up to $1,000. LINK: https://tinyurl.com/27ubvw9d

The revelation last week that we’ve been saying Adele’s name wrong for all these years (In Q&A, she remarked to a fan who called her ‘Uh-dale’ that she said her name “perfectly”). That made us go searching for some other commonly-mispronounced celeb names…

✗ Rihanna: “Ree-ANNA” She went on record on “Showbiz Tonight”, saying that’s the correct way to say it (as opposed to the popular “Ree-AWNA”).

✗Camila Cabello: The double “l” in her surname is pronounced like “ay” in Spanish. So, it’s “Cam-EE-la Cab-AY-o,” not “Cab-ell-o.”

✗ Ariana Grande: She said in a 2018 interview that her grandfather had one pronunciation (“GRAND-ee”) but then her brother changed it to “GrAHn-day,” but she prefers it the old way.

✗ Lindsay Lohan: On TikTok this year, she introduced herself by putting an emphasis on a long “o”, not the “h.” Most people say “Low-HAN,” but she says “LOW-en”. (Actually, she isn’t mentioned much at all, anymore…)

✗ Gal Gadot: “Gal Gah-dote” For the Israeli-born “Wonder Woman”, start with “Gal” as in “My Gal Sal” and for the last name, make the long-o sound, as in “to dote on someone.”

✗ Chrissy Teigen: She once revealed in a tweet that basically the whole world has been pronouncing her surname incorrectly. She explained: “Last name is Tie-gen not Tee-gen”.

✗ Charlize Theron: On TV, she once stated that her surname is pronounced “Throne”, with a slight roll of the “r”.

✗ Amanda Seyfried: “SIGH-fred”. She says not to put a hard “G” into her last name, and not include “fried,” like “fried chicken.” But she admitted that her sister pronounces it differently!

✗Lupita Nyong’o: “Loo-pee-ta Nuh-YONG-oh” The Kenyan-Mexican “Black Panther” actress has an apostrophe at the end of her first name, but vocally it seems to come at the front of that word.

✗ Jake Gyllenhaal: “Jake YILLEN-hoo-leh-hay”. Seriously. It’s a Swedish-origin name, and he once said this pronunciation is “correct in Sweden and Ikea”, but he is resigned to no one ever getting it right.

I always wanted to be somebody, but now I realize I should have been more specific. - Lily Tomlin

The road to success is always under construction. - Lily Tomlin

If love is the answer, could you please rephrase the question? - Lily Tomlin

A wheelchair-bound mom surprised her son with a tear-jerking dance on his wedding day – by standing for the first time in 4 years. 58-year-old Dede Brown’s son Tayler had said he wanted to dance with his mom, but she told him to ask a different family member, due to her battle with a degenerative nerve disease that left her unable to walk more than a few steps. But on Instagram, she spotted The Zeen, a mobility device fitted with 3 levels, sitting, barstool mode, and standing, with a bicycle seat design to let the user walk and move. It arrived 2 weeks before the wedding, during which time she practiced using it in secret. Dede and husband Mark switched from her wheelchair to the Zeen halfway through the ceremony. She switched to standing mode on the dancefloor, and didn’t leave a single dry eye at the ceremony. Mark said: “Tayler couldn’t believe that she was standing, he just started crying.”