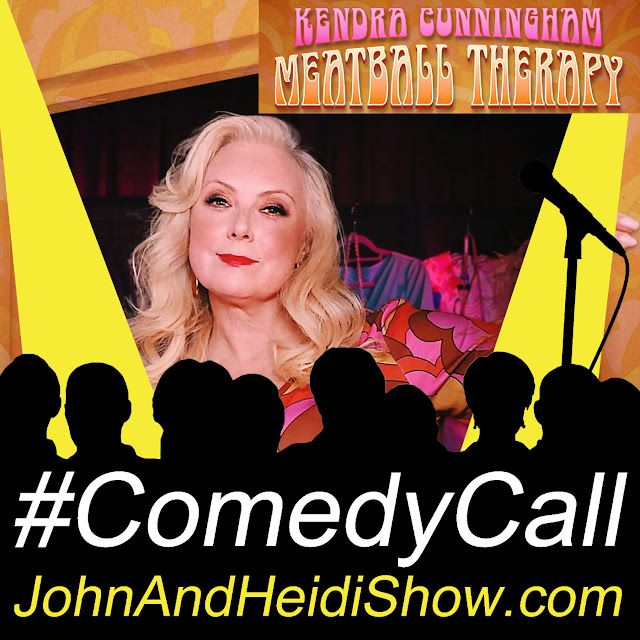 Today we have a #ComedyCall with the very funny Kendra Cunningham. We will chat about her new comedy special Meatball Therapy https://amzn.to/3g2u7Ie

According to a recent survey conducted by TopCashback.com, 86% of Americans will look elsewhere for a gift if shipping is too expensive.

Here’s the most Americans would shell out for shipping a gift:

According to a new survey, many of us feel more pressure to tip these days, as more businesses switch to cashless checkout. In a poll of more than 1,000 people in the US, 54% said they feel added pressure to leave a tip digitally when they pay using a store’s cashless system. In fact, 51% admit they’ve left a tip when they normally wouldn’t, because the screen asked them if they would like to tip their server.

And we were still hoping they’d get back together! “Friends” star Jennifer Aniston is planning to sue Brad Pitt for $100 million. Despite Pitt’s divorce battle with Angelina Jolie, he has also managed to annoy his other ex-wife, Jennifer Aniston. Reportedly, Pitt is planning to sell Plan B – the production company he set up with Aniston, for a hefty pay-out, which has left her demanding a share. The then-married couple started Plan B in 2001. When they ended their relationship, the production company was transferred to Pitt, but Aniston believes she was not given credit for founding it. After the duo divorced, Pitt took over the label in 2005. Now that rumors have started swirling that he’s planning to sell it, Aniston is allegedly suing him to dispute his entitlement to the $100 million it’s expected to go for.

“Breaking Bad” star Aaron Paul wants to change his name to…Aaron Paul. Newly revealed legal documents show that the actor, whose last name is actually Sturtevant, is looking to legally change it to Paul, a name he’s used in the industry for years. In fact, Aaron his wife Lauren both want to change their last names to Paul… and they want to change their 7-month-old son’s name, which is currently Casper Emerson Paul — to Ryden Caspian Paul. Yes, the child’s last name was already Paul, even though his parents didn’t officially share that name — but they’re changing the youngster’s first and middle name. The reason Aaron and Lauren give for their name changes: They want to conform to Aaron’s professional name and keep the family name consistent.

Johnny Depp is no longer dating his lawyer. It has been confirmed that Depp and Joelle Rich, who represented him in his UK libel lawsuit, are no longer seeing each other. In September, it was reported that the 59-year-old actor and the London lawyer were “dating, but it’s not serious.” Rich was on Depp’s legal team during his libel case against The Sun, which he lost in November 2020. He sued the newspaper for calling him a “wife-beater,” but the court upheld the outlet’s claims as being “substantially true”. Rich was not among his lawyers in this year’s defamation case against ex-wife Amanda Heard, which was held in Fairfax County, Virginia.

Starbucks has debuted its 2022 holiday drink menu, and although there aren’t any new drinks, the coffee chain is bringing back some crowd favourites…in their customary red cup of cheer. Starbucks is celebrating 25 years of those festive red cups, and this year’s 4 new designs are all designed to look like they’re done up in adorable wrapping paper. Seasonal drink favs have also returned, including the peppermint mocha, caramel brulée latte, chestnut praline latte, toasted white chocolate mocha and the Irish cream cold brew. In addition, the iced sugar cookie almond milk latte is returning after its debut last year. FUN FACT: For the first 2 years upon the introduction of the Starbucks holiday cup, they were actually purple.

The term “footage” comes from the early days of movie-making, when films were measured in feet while being edited.

Scientists have determined that that your body truly can feel happiness from head to toe.

There’s a town in Oklahoma named “Hooker,” and its slogan is “it’s a location, not a vocation.”

In Venice, Venetian blinds are known as “Persian blinds”.

The largest muscle in your body is the one you are sitting on!

The word “almost” is the longest word in the English language with all of its letters in alphabetical order.

Question: According to a survey, 5% of households that that have one of THESE, never use it. What is it?

A venomous 2.2-meter (7 foot) king cobra that escaped from its home in a Swedish zoo has returned home…by itself, after a week. The deadly snake, name is Sir Vass (Sir Hiss), escaped Oct. 22 via a light fixture in the ceiling of its glass enclosure at the Skansen open-air museum. As a result of an intensive search with X-ray machines, “Houdini”, as he has been nicknamed, was located earlier this week in a confined space between 2 walls. Holes were drilled into the walls, but the cobra disappeared early Sunday. It turned out he had given up his freedom ride and crawled back to its terrarium.

Check out the 10 best (and 10 worst) cities for sandwich lovers below, followed by key insights from our report. (See where your city ranks.)


The only bathroom law I’m interested in is one that bans loud sighing. - Conan O’Brien

A 93-year-old Ontario man says he’s happy he won the lottery because he’ll finally be able to pay off his mortgage. Richmond Hill’s Thomas Gibson won $1 million in the Sept. 27 Lotto Max Draw. He said that his son was checking his tickets for him, and “came into the living room and said, ‘By the way, you just won a million bucks.’” Besides paying down his mortgage, Gibson plans to share some of his winnings with his caregivers. Quote: “I would dream about this moment every time I bought a ticket.”