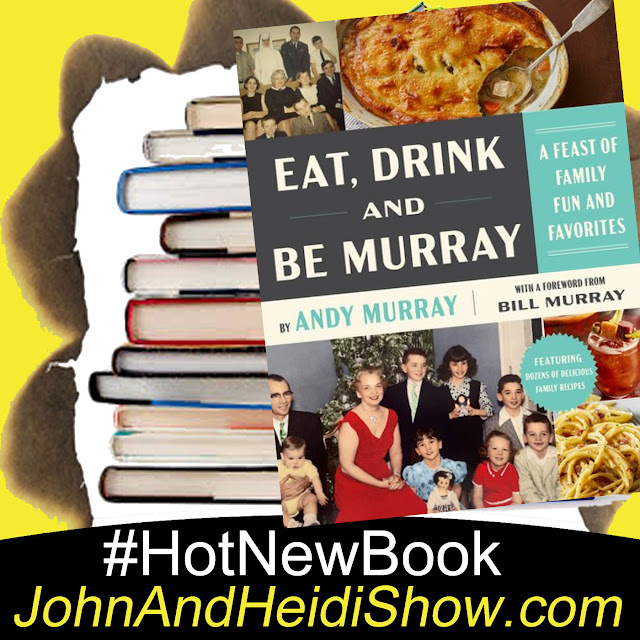 Today we visit with Chef Andy Murray about his new cookbook “Eat, Drink, and Be Murray: A Feast of Family Fun and Favorites”

A family cookbook full of beloved Murray favorites, from celebrated chef and owner of the Caddyshack restaurant in Florida, Andy Murray. With lots of stories, snapshots, and a Foreword from celebrated actor and Andy’s older brother, Bill Murray.

The old saying might actually be true: An apple a day really could keep the doctor away. Researchers say that daily consumption of apples, berries, grapes and tea can promote heart health. A study funded by the US Academy of Nutrition and Dietetics investigated data from 172 studies on the health benefits of flavan-3-ols — a “bioactive” compound that’s good for your heart. Data showed that the flavan-3-ols — also found in red wine and dark chocolate — can improve blood pressure, cholesterol and blood sugar levels. The lower blood sugar levels resulting from ingesting the compound also reduces the risk of nerve and eye damage. The scientists are now advising people to eat the equivalent of an apple, some berries and 2 cups of tea every day — a combination containing about 500 milligrams of flavan-3-ols.

No one can fault you for feeling a bit nervous before heading to the dentist, but a team from the American Dental Association suggests avoiding marijuana before your appointment. As personal and medical marijuana use increases, a new poll finds more than half of dentists (52%) suspect a significant number of their patients are high when they arrive for a checkup. Most dentists said they limit treatment to patients who are high, sometimes forcing them to return for another visit. And due to concerns over how marijuana and anesthesia impact the central nervous system, 46% of dentists said sometimes they need to use more anesthesia.

Ryan Seacrest is bidding his final farewell to Los Angeles. He just unloaded his last big property there — the mansion he bought from Ellen DeGeneres. Real Estate sources say he closed on the sale of his sprawling Beverly Hills estate for. . . $51 million. He originally put the home on the market 2 years ago, with a price of $85 million. Seacrest relisted it earlier this year for $69 million. The resort-like compound consists of 5 structures set between water features and gardens. The main house is 9,000 square feet with 4 bedrooms, 6 baths and a gourmet chef’s kitchen with an opening to an outdoor pizza oven. The place is decked out with a movie theater, world-class gym, spa and a master suite with a private meditation garden.

Rainn Wilson has changed his name to protest climate change — to ‘Rainnfall Heat Wave Extreme Winter Wilson’. “The Office” star announced his name change on Twitter Wednesday ahead of the United Nations climate change conference COP27 summit in Egypt this week. He wrote: “With the help of my scientist friends at Arctic Basecamp, I’ve changed my name to Rainnfall Heat Wave Extreme Winter Wilson. This is not a joke, I’m as serious as the melting Arctic, which amplifies global risks including extreme weather events around the globe.” The 56-year-old actor is a board member of Arctic Basecamp, a team of Arctic experts and scientists who bring their expertise to events around the world. He said he hopes to raise awareness about global environmental issues and the consequences from the warming Arctic. LINK: https://tinyurl.com/mrydjh9v

What exactly IS IT about some songs that gets everyone out on the dance floor? Well, it’s all about that bass, of course. Researchers from McMaster University in Hamilton ON found that people danced almost 12% more when a very low-frequency bass was playing. The team staged a concert, using the electronic duo Orphx, to perform at the university’s LIVELab. The venue was equipped with special equipment, including 3D motion capture and enhanced speakers that can produce extremely low frequencies that are undetectable to the human ear. Throughout the concert, the researchers manipulated the very-low bass-playing speakers, turning them on and off. They found the amount of dancing movement was 11.8% greater when the speakers were on. They say that with low bass comes strong vibrations that can be felt throughout the body. The interaction between the vibrations and our body affects the body’s motor system, which is what researchers think gives us this urge to dance.

The most-used expression in the world is “OK”.

What is called a “French kiss” in the English-speaking world is known as an “English kiss” in France.

In space, astronauts cannot cry because there is no gravity and tears can’t flow.

The word ‘bidet’ comes from the French word for ‘pony’.

A cricket can’t hear its own chirping.

Children grow faster in the springtime.

Question: In a survey, 35% of millennials said they are worried the Christmas dinner table conversation will turn into THIS. What is it?

Answer: Questions about their relationship

Palmer Luckey, the founder of Oculus VR who sold his company to Facebook, says he’s come up with a custom VR headset that will kill a player if they die in a video game. Like, literally. Describing the headset in his blog, Luckey, who has mainly worked on national defense tech in recent years, details how he made a “Sword Art Online”-style headset. In that series, players are trapped in a giant, VR combat simulation where if they die in the game, it will kill them for real, because they are laced into “NerveGear” tech. Luckey’s version of the concept is a VR headset that is laced with charges that will explode, “destroying the brain of the user” if they trigger a “game over” screen. However, he hastens to add in his blog post that while he has designed the part of the headset that can kill you, “The perfect-VR half of the equation is still many years out.”

• Whyzit they call it an ‘escalator’ even when it takes you down?

• Whyzit called your ‘bottom’ when it’s really in the middle of your body?

• Whyzit things are typed ‘up’ but written ‘down’?

• Whyzit we say an alarm clock goes ‘off’ when it actually turns ‘on’?

I looked up my family tree and found out I was the sap. – Rodney Dangerfield