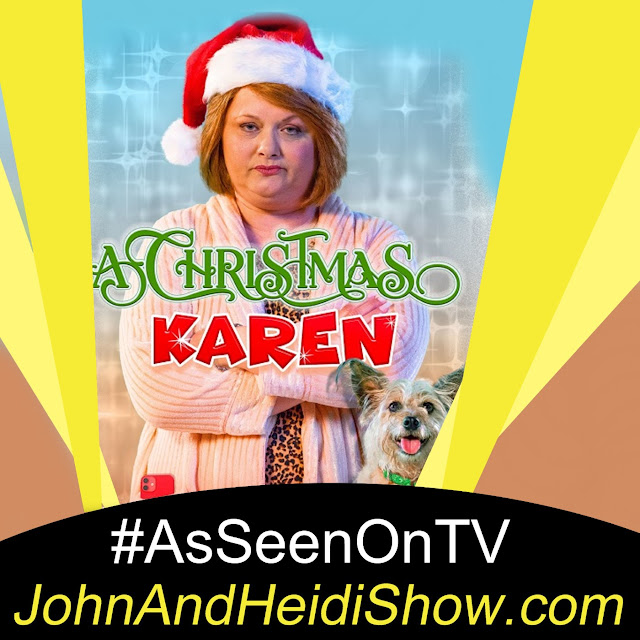 Today we visit with Michele Simms about her new film A Christmas Karen, which centers on an entitled, egocentric middle-aged woman named Karen (played by Simms), whose demanding and inconsiderate nature has alienated her from her neighbors and family alike. After a series of instances displaying her privilege, prejudice and bad attitude on Christmas Eve, Karen receives an “intervention” by three unconventional spirits who take her on a much-needed journey of self-awareness and self-reflection. Using humor to shine a spotlight on the lack of consideration and civility in today’s society, A Christmas Karen is ultimately a story about the power of redemption... the film is a modern re-imagining of the classic holiday story A Christmas Carol.

A new study says there is a connection between your personality and the type of music you enjoy. Mental Health portal Very Well Mind surveyed over 36,000 people worldwide, asking them to rate different musical styles, and fill out questionnaires relating to the ‘Big 5’ personality traits: extraversion, agreeableness, openness, conscientiousness, and neuroticism. Here are some of their conclusions:

• Rap/hip hop fans: Despite the stereotype they are aggressive or violent, no such link was found. They tend to have high self-esteem and are generally more outgoing than fans of other styles.

• Fans of Pop music: are described as having “high self-esteem” with extraverted (outgoing) personalities, and have “honest, and hard-working” traits.

• Fans of Country: Tend to be hardworking, conventional, outgoing, and conservative. They to be emotionally stable, and rank lower than others in openness to experience.

• Fans of Rock and Heavy Metal: “often project images of anger, bravado, and aggression”, but in spite of their aggressive music tastes, they tend to be gentle, creative and introverted, with low self-esteem.

• Fans of Indie music: are defined by their “passivity”, but like their metalhead brethren, are creative, introverted, and display low self-esteem. They also tend to be intellectual, but less hardworking.

• Fans of Dance music: Are typically outgoing, assertive, and open to experience, but rank lower than others in gentleness.

• Fans of Classical music: Are somewhat introverted but at ease with themselves. Creativity and healthy self-esteem are common among them.

• Fans of Jazz, Blues, and Soul: Tend to be extroverted with high self-esteem. They also tend to be very creative, intelligent, and at ease.

The average person has 5 people in their life who they have a very strong relationship with, and can count on for anything, according new research. A OnePoll survey looked into 2,000 Americans’ levels gratitude for the relationships in their lives, and found that 7 in 10 are more thankful for the people in their life this year than ever before (71%). Who are they most thankful for? Kids came in at #1 (54%), followed by a romantic partner (53%) and siblings (45%). One in 7 employed respondents said they also feel very thankful for a co-worker.

Mariah Carey won’t be getting everything she wants for Christmas this year. Her attempt to trademark the phrase “Queen of Christmas” has been rejected. The US Trademark Trial and Appeal Board denied her attempt to trademark the phrase, along with her attempts to lock down the rights to “Princess Christmas” and “Christmas Princess.” Carey applied for the trademarks in March, 2021 but quickly faced backlash, including from singer Darlene Love, who says David Letterman gave her the title 30 years ago. Carey’s planned to use the title for things like fragrances, lotions, nail polish, jewelry, and mugs, as well as ornaments, toys, dog clothing, masks, lingerie and sweatshirts.

It’s the most wonderful sale of the year! The cast of “A Christmas Story” is looking to buy themselves a very familiar Christmas present. The home from the 1983 holiday film classic hit the market this week, and some of the cast members are looking to snatch up the property. Yano Anaya, who played ‘Grover Dill’ in the film, said to a reporter: “It only makes sense to have the cast run the show”. Though Anaya wouldn’t share which co-stars are looking to pitch in, he believes keeping the house in the Christmas Story family would be great for the fans — and no one will have to worry what could happen to the house if it’s bought by an outsider. The house, built in 1895, has been a popular tourist attraction in Cleveland, and with the sequel to the original film dropping on HBO Max, many fans are expected to make their way back to the property this holiday season, and beyond.

Japanese clothing and housewares company Nissen recently launched a line of bed linens and blankets – made to mimic the look and feel of cat fur. You may be aware that studies show that petting a cat reduces levels of stress hormones in people. But what about those who live where they can’t have a pet, or those who are allergic? That’s where the new Neko Feel (“Cat Feel”) material developed by Nissen comes in. Nissin’s offerings include a mattress pad, a blanket, a smaller throw blanket, and a ‘circle relaxation cushion’ that goes on the floor. Prices range from US $13-41, for the double bed-size blanket. The problem? They sold out within hours of Nissen’s Twitter announcement. LINK: https://tinyurl.com/mwkcacyt

Checkers used to be known as “Chess for Ladies”.

The rules of golf once said that if your ball hit your opponent, he would lose the hole.

There are 3,000 English words or phrases which mean ‘drunk’.

There’s a village in Norway called Hell, and it freezes over every winter.

Fishing is the sport with the most participants worldwide.

The largest TV audiences are drawn by (in order): the summer Olympics, World Cup Football and Formula One racing.

Question: THIS is the 2nd-most-common thing found in the average kitchen ‘junk drawer’.

There’s a price war happening on hot dog and soda combos. Sam’s Club has lowered the price of its hot dog and drink deal at its food courts to $1.38 from $1.50. Its chief rival, Costco, still offers its combo for $1.50. On its website, Sam’s Club (owned by Walmart) said: “Frankly, it can’t be beat.” Costco’s hot dog-soda deal has cost $1.50 since it was introduced in the mid-1980s, and considers it a perk for its members. Last year, the company sold 122 million of the “loss-leaders”. The companies use a similar strategy with rotisserie chickens. Despite the cost of poultry going up, Costco’s rotisserie chickens still cost $4.99, while Sam’s Club go for…$4.98.

‘Tis the season for holiday tipping, but how much should you give the hired help? Thank goodness for this handy little guide to how much you should hand out to hired hands …

• Babysitter … 1 evening’s pay plus small gift from the child.

• Housekeeper … 1 week’s pay or more (depending on length of service).

• Mail Carrier … Gifts under $20 (normally not allowed to accept cash).

That’s a whole lot of loot spread around to a lot of people. Do they all deserve it? What professions that normally aren’t tipped should be?

Don’t keep a man guessing too long – he’s sure to find the answer somewhere else. - Mae West

A Pod Of Mermaids In California Saved A Scuba Diver From Drowning
https://www.sunnyskyz.com/good-news