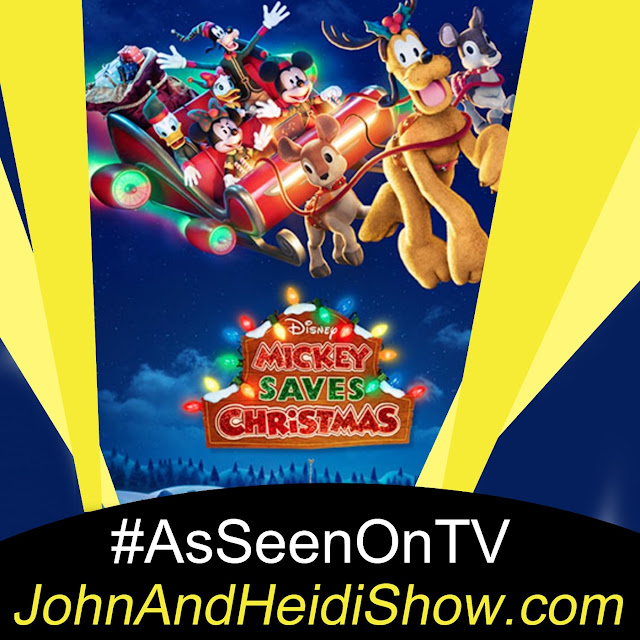 Today we visit with Brock Powell and Camryn Grimes from Mickey Saves Christmas, a new stop-motion Disney holiday special premiering Sunday, Nov. 27, on ABC (also simulcast on Disney Channel, Disney Junior, Disney XD and streaming on Disney+ the following day). Mickey, Minnie and their pals plan to celebrate Christmas at their snowy cabin, but when Pluto causes Santa to lose all the presents, the friends travel to the North Pole to save Christmas. Lending their voices to the roles of Santa Claus and Mrs. Claus are real-life couple Brock Powell and Camryn Grimes. A match made in Disney heaven, the two lifelong Disney fans (who also star together in Disney’s animated series Hamster & Gretel) were first introduced by Bill Farmer (who’s been the voice of Goofy for 35 years) and they announced their engagement earlier this year - with a theme from their favorite Disney-Pixar film UP – with balloons and all!

• 33% of us buy at least one frozen dinner at the grocery store every week.

• 8% of adults say they can’t remember their first concert.

• 32% of women say they aren’t sure if their partner knows their natural hair color.

• 30% of men say they’ve never cleaned the toilet in their own home.

Friday, it was announced that alcohol would no longer be available in stadiums for the Qatar 2022 World Cup, despite officials originally promising it would be. But for those heading to the Middle East, there’s still a way to enjoy an alcoholic beverage at stadiums – although it certainly won’t be cheap. The only way for fans to drink alcohol at any of the 8 World Cup stadiums is by purchasing a corporate hospitality ticket, which will set you back a cool US $22,600 (£19,000). Fan parks will continue to sell alcohol despite the change of plan from officials, though it will cost around US $14.25 (£12) a pint. Another loser out of all of this is Budweiser – which struck a massive $75 million (£63 million) deal with FIFA for exclusive rights to sell beer at the World Cup. When FIFA announced it was dropping alcohol in stadiums just 2 days before the first game, Budweiser posted a tweet saying: “Well, this is awkward”.

“Thor” actor Chris Hemsworth has announced he’ll be taking a “good chunk of time off” after making a shocking health discovery while filming his show “Limitless”. The new Disney+ docu-series sees Hemsworth exploring different ways humans can live longer and healthier lives. He told Vanity Fair that in the 5th episode, titled “Memory”, he underwent a test that showed he had 2 copies of the gene APOE4, which has been linked to Alzheimer’s disease. Quote: “The plan was to on-camera tell me all the results and then talk about how you can improve this and that.” But, he says, the doctor featured in the episode didn’t want to have to tell him the result on camera, preferring to have an “off-side” conversation to see if he even wanted this info to be featured in the show. Hemsworth discovered that he is 8-10 times more likely to get Alzheimer’s disease, a revelation that prompted him to decide to take some time to be with his family. He decided he wanted to leave his diagnosis in the program, as a “motivator” for others.

O Come, all ye “Deadpool” fans, you someday might get a full Christmas movie starring the “merc with a mouth”. In an interview with The Big Issue, Reynolds evealed that he and the writers behind “Deadpool” actually wrote an entire Christmas movie for the character several years ago, but “it got lost in the shuffle of Disney acquiring Fox and it never got made.” Reynolds hopes that “one day” they’ll get the go-ahead to produce it. That revelation might help explain the 2018 release of “Once Upon a Deadpool,” which wasn’t a full Christmas film for the antihero, but was a PG-13, Christmas version of “Deadpool 2”.

Brian Laundrie’s family has joined the public outrage over a clue featured on Sunday’s episode of “Celebrity Jeopardy!” involving their son, who committed suicide after murdering his girlfriend Gabby Petito last year. According to their attorney, the family agrees with comments made by shocked social media users — who slammed the game show for the “insensitive” and “tasteless” clue — and wants the show to apologize. The clue read, “In 2021, fugitive Brian Laundrie ended his days in Fla.’s Myakkahatchee Creek area, home to these long & toothy critters.” Fans slammed the show, saying the nature of the clue made light of the tragic circumstances in which Petito and Laundrie died.

The song ‘Silver Bells’ was called ‘Tinkle Bells’ until co-composer Jay Livingston’s wife told him “tinkle” has another meaning.

Dueling is legal in Paraguay, as long as both parties are registered blood donors.

Kraft singles cannot be advertised as cheese because USFDA standards state food can only be identified as cheese if it contains “at least 51% real cheese”. Instead, they’re labeled: “Pasteurized Prepared Cheese Product”.

The words ‘moron’, ‘imbecile’ and ‘idiot’ all technically refer to a person whose IQ is below 70.

A study found that people who enjoy doing laundry are less likely to experience sock loss.

Question: 27% of men do THIS when they are having a bad day. What is it?

25 years after boxer Mike Tyson but off a chunk of Evander Holyfield’s ear during a championship match, the 2 have teamed up to release a cannabis gummy collection called . . . “Holy Ears”. The edibles will be sold through Tyson’s cannabis company, Tyson 2.0. Referring to the infamous 1997 heavyweight title fight, he said: “If I was on cannabis, I wouldn’t have bit his ear.” LINK: https://tinyurl.com/yvdra7uj

As we all get set to do our holiday shopping, the group “World Against Toys Causing Harm” (W.A.T.C.H.) has unveiled its annual “10 Worst Toys” list for 2022. According to W.A.T.C.H., here are the toys that parents (and Santa) should avoid getting for kids, due to potential hazards…

I’m not for everyone. I’m barely for me. - Marc Maron

A New Mexico woman, who had been missing for 2 days, was finally rescued after a train passenger saw her waving from her window. The woman had gone hiking along the Colorado Trail when she fell off a cliff while trying to take pictures. She broke her leg in the 90-foot fall, and had been unconscious for an unknown period of time. When the train passenger saw the woman waving for help, she immediately alerted the conductor. A 9-11 call would confirm that the family of the hiker had been looking for her. Thankfully, riding in the next train passing the location were 2 trained medical and emergency professionals. They were able to cross the river to examine the woman, assess her injuries, bring emergency supplies, and assist in a helicopter rescue. There were 327 passengers on the train at the time, and they all waited as the couple helped the injured hiker, who was not dressed to battle the wilderness temperatures throughout her ordeal.