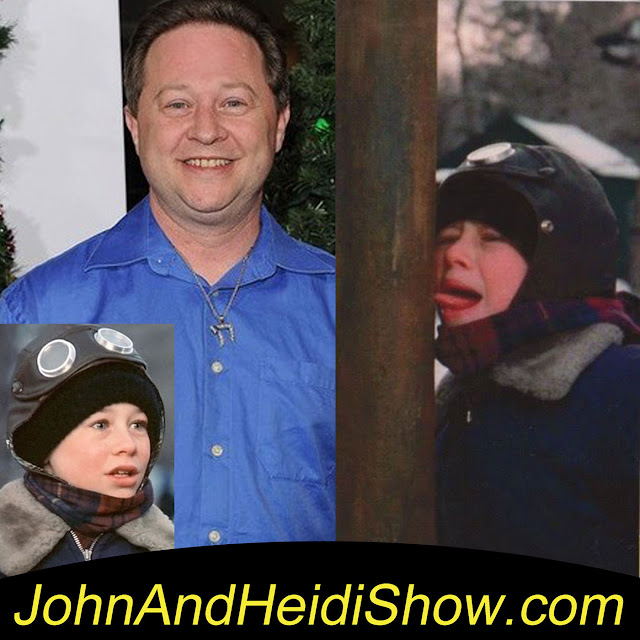 This #MovieStarMonday we visit with Scott Schwartz. In addition to being in Toy Story with Richard Pryor and Jackie Gleason. He was also Flick in the movie “A Christmas Story” his character FLICK got his tongue stuck to a flag pole in a double dog dare! In the NEW MOVIE, Flick is back, but he's the one doing the double-dog daring this time!  https://www.youtube.com/watch?v=kzQK0YFbFg0

We’ve always been taught that money doesn’t buy happiness. But apparently, it does — at least to a point. A study published in the journal PNAS looked at the effects of giving 200 people a one-time sum of $10,000. Those who got the money were required to spend it all within 3 months. They recorded how happy they felt on a monthly basis, on a scale of 1-7. After 3 months of spending, those who received the cash reported higher levels of happiness than a control group that did not receive money. After 3 MORE months had passed, the recipients still reported levels of happiness higher than when the experiment started. However, people with household incomes above $123,000 did not report noticeable improvements in their happiness.

A mindfulness meditation course may be as effective at reducing anxiety as medication, according to a new study. Research, published in JAMA Psychiatry, involved 276 adults with untreated anxiety disorders. Half took a common medication, while the other half were assigned to an 8-week course in mindfulness-based stress reduction. The results were stunning: Both groups experienced about a 20% reduction in their anxiety symptoms. The researchers say this means meditation could be prescribed instead of medication for patients who experience severe side effects or have allergies to anti-anxiety medications.

Here we go again – again. Nick Cannon is now a dad of 11! “The Masked Singer” host — who already shares 16-month-old twins Zion and Zillion, with his ex Abby De La Rose, announced the news by sharing a sweet picture with his former girlfriend and their little one as they doted on her, and wrote: “A BEAUTIFUL DAY for ‘BEAUTIFUL ZEPPELIN CANNON’ to arrive! Mommy @hiabbydelarosa you make it ALL look so easy and effortless but I am forever indebted to your tireless work of constant dedication.” He is also expecting his 12th child with Alyssa Scott.

Apparently, Nick Cannon is totally cool with jokes about how many kids he has. On Instagram, he shared a meme poking fun at his rate of procreation. The image is headlined, “National Geographic determined what Americans will look like in 2050, and it’s beautiful,” along with a photo of Cannon’s face photoshopped onto other people’s heads. In the caption, Cannon wrote: “Wow! Everybody got jokes! 🤣.” Last week, Cannon welcomed his 11th child with Abby De La Rosa, their third baby together. He is also expecting baby #12 with Alyssa Scott sometime next year. LINK: https://tinyurl.com/whk6r4tn

Saying he wants to clear his name, Alec Baldwin is suing the people involved in handling and supplying the loaded gun he was using when it fired and killed cinematographer Halyna Hutchins during the 2021 “Rust” filming accident in New Mexico. Baldwin filed a cross-complaint in LA superior court, stating: “This tragedy happened because live bullets were delivered to the set and loaded into the gun”, and alleging negligence against some of the people sued by script supervisor, Mamie Mitchell. Among other things, it seeks a share of any damages that Mitchell may win and asks that they pay for any damages assessed against him.”

Lite-Brite. When was the last time you heard those words? The game, dating back to the 1960s and based on the placement of colorful pegs, is among the new honorees for The National Toy Hall of Fame. Also inducted into the hall for 2022 are the “Masters of the Universe” line of muscle-bound action figures, and the ‘top’ the spinning toy that dates back to ancient times. Those 3 were chosen from a field of 12 finalists that also included bingo, Breyer Horses, Catan, Nerf, the piñata, Phase 10, Pound Puppies, Rack-O and Spirograph. The Toy Hall of Fame inducts a new class of toys each year in a ceremony at The Strong Museum in Rochester NY, where the hall is housed.

The 3 things pregnant women dream of most during the first trimester are: 1) frogs 2) worms and 3) potted plants.

At any given moment, there are 1,800 thunderstorms happening on Earth. (This amounts to 16 million each year.)

It takes twice as long to lose new muscle if you stop working out, than it did to gain it.

On average, people can hold their breath for about one minute. The world record is 24 minutes 37 seconds.

Frank Sinatra was offered the lead role in “Die Hard”.

The name for the shape of Pringles is called “Hyperbolic Paraboloid.”

Question: In a survey, 16% of people said doing THIS makes them feel better when fighting a cold. What is it?

Answer: Cuddling with a pet

The government of Ontario, Canada has announced that it will build a highway using the new “2+1” system, the first of its kind in North America. The pilot project, to be constructed on Highway 11 north of North Bay, will include a new 3-lane highway approximately 15km (9.3 miles) in length, featuring a center passing lane that changes direction about every 2-5 kilometers (1.2-3.1 miles). The Ministry of Transportation says the 2+1 highway system is used “in other jurisdictions around the world and is more cost-efficient than twinning a highway.” The plan is to complete the highway, then after a period of evaluation, consider using the same system in other locations. LINK: https://tinyurl.com/mr4cmyds

THE BEST COMEDIES OF THE 21ST CENTURY:

According to Rolling Stone…

10. “‘The 40 Year Old Virgin” (2005): For his directorial debut, Judd Apatow showed the knack for connecting heavy improvisation from an ensemble cast with a surprisingly overall sweetness that would become his signature. (Plus, Steve Carrell shouting “Kelly Clarkson” is a great moment in modern filmmaking!)

9. “Shaun of the Dead” (2004): Best spoof of the century? Director Edgar Wright’s breakthrough film mocks horror movies, zombie flicks and post-apocalyptic dramas — and still delivers a pretty riveting mash-up of those styles on top of it.

8. “Toni Erdmann” (2016): Oddly, one of the greatest comedies of the last 2 decades is a 162-minute movie from Germany. The triple whammy of karaoke, comic nudity and costumed lunacy is on par with anything in the Apatow universe. (We haven’t heard of it, either. Consider it a recommendation…)

6. “Walk Hard: The Dewey Cox Story” (2007): John C. Reilly stars in this merciless takedown of the music-biopic formula. You can picture the producers compiling a genre checklist and masterfully skewering each entry one by one. (“And I want an army of digeridoos. Fifty thousand digeridoos!”)

I’m one of the few people in Hollywood who actually had a good childhood. - Seth MacFarlane

Just moments after James Verpaele was crowned homecoming king at Merritt Island High School in Florida, he lifted off his crown and gave it to someone he thought was more deserving: his friend, Parks Finney. Finney, who is developmentally disabled, is the manager of the softball and track and field teams at the school, and as Verpaele put it: “Parks comes to all the games and most practices and cheers us on.” Verpaele and the other nominees for king had agreed the winner would give Finney the crown and sash because “he’s a friend to all of us,” Verpaele said. Finney’s mom, Amy, said. “It’s a testament to the culture at our school, but also shows how kind teenagers can be.”