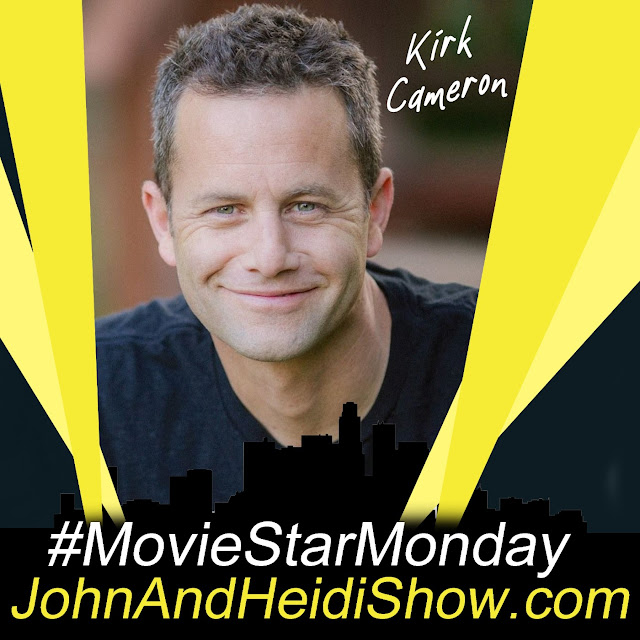 This #MovieStarMonday we visit with Kirk Cameron (Growing Pains, Fireproof) about his new film LIFEMARK. Based on the documentary ‘I Lived On Parker Avenue,’ LIFEMARK is the true story of a young man’s journey as he sets out to meet his birth parents. With a talented cast, including Kirk Cameron (“Growing Pains,” FIREPROOF), Alex Kendrick (COURAGEOUS, OVERCOMER), Rebecca Rogers (WALKING IN SOUTHPORT, TEXAS REIN), Dawn Long (TREASURE LIES, COWBOYS), Raphael Ruggero (THE ASSIGNMENT), Justin Sterner (“American Detective, KID COMBAT) and Marisa Hampton (THE RELIANT, “Dynasty”), LIFEMARK is a reminder that one courageous decision can change everything. https://lifemarkmovie.com/

Spicy foods equal a spicy life. Or at least it would seem, according to a survey, which found that people who enjoy spicy foods are more likely to consider themselves “hot”. 2,000 American adults were polled, in an effort at finding if there are any personality correlations between people who are spicy food enthusiasts. What did they find out? Spicy food eaters are more likely to enjoy trying new things (76%), consider themselves attractive (62%) and are more content with their lives (66%) than those with milder heat preferences. 93% of respondents prefer some level of heat in their food. Nearly 4 in 10 (36%) say they go for medium, 33% go for mild and 24% like their spice level set to hot. What else did we find out about those who find spice nice? They’re more likely to describe themselves as creative (54%), confident (51%) and adventurous (44%). Meanwhile, those who walk on the “mild” side are more likely to describe themselves as empathetic (41%) and shy (37%). Oh, and here’s a heads-up, just in case you expect to see your hot-wings-loving Uncle Larry over the holidays: Those who love spicy food are also most likely to “stir the pot” at get togethers, causing drama with friends and family.

Grabbing just 30 seconds of sunlight every morning could slash your chances of developing most types of cancer significantly, research by one of the UK’s leading specialists suggests. Dr. Mohammad Muneeb Khan says that less than half a minute’s exposure to the sun’s near-infrared (NIR) light between sunrise and 9am may offer a higher level of protection to adults and children than eating 2,500 bananas or a kilogram of Brazil nuts per day. Stepping outside during these times could cut the odds of developing cancer from a 1 in 2 chance to 1 in 10, making it a more effective inhibitor than any other single preventative measure. NIR light, which is invisible to the human eye, is most effective at dawn.

Quentin Tarantino is sticking to his 10-movie promise. In a new interview with CNN, the filmmaker confirmed that his next movie will be his last, after directing 9 standalone films over the past 3 decades (plus 2007’s “Death Proof”, half of the double feature “Grindhouse”). The 59-year-old said: I’ve been doing it for 30 years. And it’s time to wrap up the show. I’m an entertainer. I want to leave you wanting more.” Tarantino kicked off his big-screen directorial career with 1992’s “Reservoir Dogs”, and most recently handled 2019’s “Once Upon a Time in Hollywood”. He has won 2 Academy Awards for screenwriting: for “Pulp Fiction” and “Django Unchained”.

Ben Affleck and Matt Damon are starting their own production company that promises to put creatives first — both in terms of less corporate red tape — and more money long-term. The new studio, Artists Equity, will seek to create “entrepreneurial partnerships” with filmmakers. RedBird Capital is making what’s termed “a significant financial commitment in launching the company, providing strategic capital and operational expertise. Affleck and Damon combined have generated more than $10.7 billion in worldwide box office revenue, in 110+ feature films as star or costar, 6 produced screenplays, 8 TV series as executive producer or writer, and earned 3 Academy Awards. They will lead the company.

HOW TO TELL IF IT’S A COLD, FLU, OR ALLERGIES:

A few tips from health experts ….

✓ Colds and the flu are viral infections that usually bring fever, aches, and fatigue.

✓ Allergies do not come with a fever.

✓ If you’re sneezing and blowing your nose endlessly, it could be a cold or allergies, but a cold will leave after a week-to-10 days. Allergies linger.

✓ Allergies are not accompanied by pains, upset stomach, or exhaustion like the flu.

✓ For colds, well, grandma was right. Chicken soup really is a good remedy, though doctors are not sure why.

William Shakespeare had a curse engraved on his tombstone to prevent anyone from moving his bones.

It’s a myth that no 2 snowflakes are exactly the same. In 1988, a scientist found 2 identical snow crystals in Wisconsin.

People who feel an urge to correct other people’s grammar are actually suffering from a form of OCD known as ‘Grammar Pedantry Syndrome’.

Question: 26% of Americans say they’d prefer THIS as the main course for Thanksgiving. What is it?

Who knew? When you shelled out $250 for your fancy Apple AirPods Pro, you were also buying a set of hearing aids. A group of Taiwanese researchers have found that using AirPods Pro can be just as effective as professional hearing aids, at a fraction of the price. In 2016, Apple released a feature called “Live Listen” that allows people to use AirPods for sound amplification purposes. The researchers tested 4 devices with 21 participants with mild to moderate hearing loss. They found AirPods Pro performed comparably to basic hearing aids in a quiet environment, only slightly less effective than premium hearing aids. In a noisy environment, AirPods Pro performed similarly to premium hearing aids. The study author says that whether because of the cost or due to social stigma, people are reluctant to invest in regular hearing aids, but this information may be a good starting point in assisting those with compromised hearing.

A new study by password management service NordPass reveals the most popular choices, every one of which is estimated to take less than one second to crack by an experienced hacker. Here are the top-10… (look familiar?)

Drones can be crucial during natural disasters by transporting supplies to people in need. But what if the delivery drones themselves were made of food? A team at the Swiss Federal Institute of Technology has developed a small flying craft with wings made of rice cakes, to enable it to deliver more life-sustaining nutrition or medication. To fashion the wing, the rice cakes are laser-cut into hexagons and fixed together by gelatin. These are then wrapped in protective plastic, before being affixed to the drone. Gelatin was found to be an adequate adhesive. The wingspan of about 27 inches (70 centimeters) results in enough rice cake and gelatin glue to deliver the equivalent of one breakfast serving—with 80 grams remaining for a payload of vitamins or water. The developers say the wing tastes like “a crunchy rice crisp cookie with a little touch of raw gelatin.”