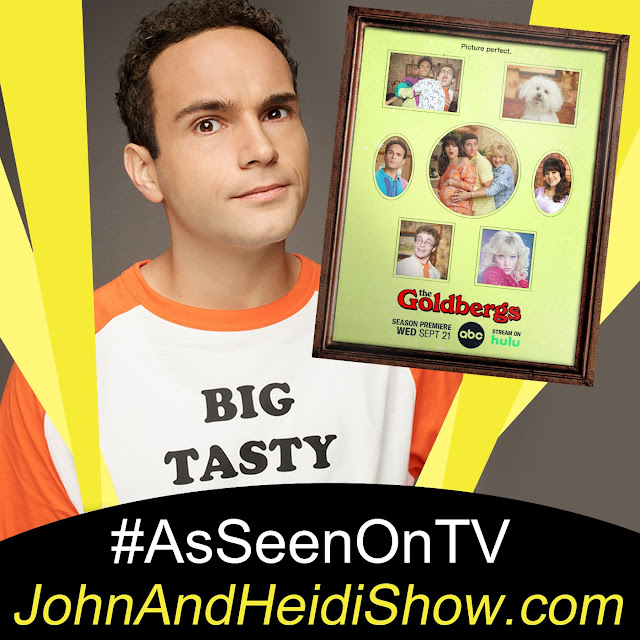 Today we visit with Troy Gentile. He plays BARRY on The Goldbergs on ABC TV! https://abc.com/shows/the-goldbergs


It might not come as a surprise to hear this, but a third of us smile less during the colder months, according to a study. A OnePoll survey also found 75% of people feel their mood is affected by the shorter and colder days of autumn and winter, and 61% are in dire need of a boost of positivity right now. But the results of the poll of 2,000 Brits also highlights how important smiling can be. Smiling is as infectious as laughter, say the experts, with the average smile passing on to 3 more people. Three-quarters of those surveyed agreed that a smile from someone brightens their day, and 28% said it’s better than receiving a gift. 36% said it made them want to do something nice for someone else. So why is smiling so positive? The act of smiling makes your brain release tiny molecules called neuropeptides to fight off stress. It also stimulates neurotransmitters like dopamine, endorphins and serotonin. Endorphins have pain relieving power and the serotonin acts as an antidepressant.

“Conscientiousness” has been named as the key trait requirement for astronauts who will be selected for the first human mission to Mars. Defined as “wishing to do what is right, especially to do one’s work or duty well and thoroughly,” conscientiousness is the most desirable quality for astronauts that will live and work on the Red Planet millions of miles from Earth, according to a new study. Conscientiousness was identified as more important than honesty, humility, emotionality, extroversion, openness, and agreeableness.

A new “Star Wars” movie is in the works at Lucasfilm, courtesy of writer Damon Lindelof and director Sharmeen Obaid-Chinoy, according to reports. At this point, no script has been written yet, but Lindelof is reported to be co-writing the project. Lindelof is best known as the co-creator of “Lost,” and has experience in space — just not the galaxy far, far away. He produced J.J. Abrams’ 2009 reboot “Star Trek” and co-wrote the sequel “Star Trek Into Darkness.” Obaid-Chinoy is already part of the Disney family, having directed several episodes of “Ms. Marvel” for Disney+. No official comment from Lucasfilm yet.

☞ Most people gain a full size during the holidays: MYTH. A Texas Tech University study found that female test subjects gained about one pound and males 1.5 in the six weeks leading up to the New Year. That’s far less than the 7-10 pounds often cited for this time of year.

☞ Bloating isn’t the same as fat weight: FACT. One reason you may feel like you’ve packed on more weight than you have is because many holiday foods trigger bloating and water retention. The main culprit? Carbs. And sodium.

☞ Exercise staves off holiday pounds: MYTH. More than one study has found that those who work out around the holidays gain the same amount of weight as those who didn’t. But remember, there are numerous other benefits to exercise, including stress reduction and improved sleep.

☞ I’ll lose it in January: MYTH. Studies show most of us never lose our holiday padding, probably because after giving up on New Year’s resolutions, we tend to gain back the weight we’ve lost.

☞ It’s not too late to avoid gaining weight this holiday season: FACT: Commit now to two simple goals: budget your carbs and drink more water. Both can help you avoid having to make that annual New Year’s resolution to lose weight.

Yoda, from “Star Wars”, was modeled after the appearance of Albert Einstein.

The world is running out of sand. We use 40 billion tons of it each year.

Studies show that Sprite may be one of the best hangover remedies.

Question: According to a survey 27% of adults say they do THIS to come up with extra money to cover the expenses of the holidays. What is it?

Answer: Make a deal with their significant other not to buy each other gifts

It’s hard to believe, but some people are still using computer passwords like “123456” and, well, “password”. The password manager software “Nerdpass” has released its annual survey, after analyzing a database of nearly 276 million passwords, and according to them, basic passwords like those can be cracked in less than a second. More than 2.5 million users were found to use the classic “123456”, which they say has been breached more than 23.5 million times. Nerdpass also points out that it is clear that not only are people still using rudimentary passwords, they are not changing them either. Of the top 200 most common passwords for 2020, only 78 were new to the list from 2019. Here are the top 5 most-commonly-used passwords:

Some suggestions for strengthening your passwords:

☞ Use two-factor authentication when possible

MUSICAL ACTS I HAVE YELLED INSTEAD OF SWEARING IN FRONT OF MY KIDS:

According to a new survey, 90% of men say their lover is also their best friend. Which is really kind of disturbing when you consider man’s best friend is his dog. - Jay Leno