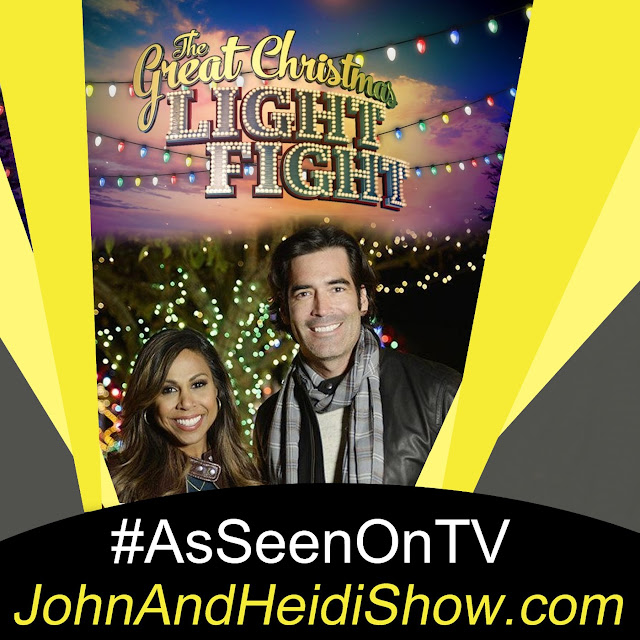 Today we visit with Carter Oosterhouse from The Great Christmas Light Fight on ABC TV. The new season launches this Monday!

As we kick off the holiday season, a new survey has found that when it comes to receiving gifts, the most important thing is – that it’s a surprise. 79% of people agreed that giving gifts is more fun when the recipient has no idea what it is. In the poll of 2,000 Americans, the “perfect gift” was also described as ‘meaningful’ by 60% of respondents, ‘useful’ by 44%, and ‘unique’ by 34%. Only 8% said they feel the best gift is funny or expensive. 81% of gift-givers feel it’s important for them to be in the room when someone is opening a present from them. And what would make the “perfect gift” even better? Nearly half believe gifts are truly the best when it’s a surprise both to the giver and the recipient — like a mystery box or blind-box item.

Apple’s Emergency SOS service arrived this week for users in Canada and the US. It enables stranded iPhone 14 users to use satellites to call for help when outside wireless coverage. The new Emergency SOS feature is a combination of an iOS app, hardware within the actual phone, and the network of Globalstar satellites — plus ground stations and staff. When a user is in distress and away from either Wi-Fi or a regular cell connection, they can point their iPhone at a satellite to ask for assistance.

Brendan Fraser will not be attending the Golden Globe Awards, even if he receives a nomination for his much-buzzed-about performance in “The Whale”. Asked in a new cover profile for GQ’s Men of the Year issue whether he would go to the Jan. 10 event, Fraser said he “will not participate”, adding: “I have more history with the Hollywood Foreign Press Association than I have respect for the Hollywood Foreign Press Association”, a reference to the nonprofit organization that votes for the Golden Globes. The “Mummy” star has claimed that former HFPA President Philip Berk sexually assaulted him in the summer of 2003, while at a luncheon at the Beverly Hills Hotel, an alleged incident Berk disputes. Fraser has said he believes he was blacklisted in Hollywood partly due to the aftermath of the alleged incident. Fraser added to GQ: “My mother didn’t raise a hypocrite. You can call me a lot of things, but not that.”

It looks as though Lindsay Lohan and Jamie Lee Curtis will be making a “Freaky Friday” sequel. Curtis was quoted this week as saying: “There is no scheduled date, but we’re talking…The right people are talking.” Curtis said she and Lohan discussed their possible big screen reunion last Sunday. She feels that with her turning 64 next week, and with Lohan 36 now, “[A sequel] lends itself so beautifully.” Curtis said they are both committed to it, and now the decision is “Disney’s to make and I think they’re interested.”

Yes, like it or not, electric vehicles are the future of transportation. But up until now, the high cost of EV batteries and long charging times stood in the way of mass adoption. Now, researchers at Penn State say they have developed a breakthrough electric vehicle battery design that could lead to more affordable electric vehicles – that charge in just 10 minutes. Without getting too technical, the researchers say their breakthrough involves their development of a method of temperature control that promotes the best possible performance from a battery, and it will allow most drivers to downsize their electric vehicle batteries from 150 to 50 kWh. Lead study author Prof. Chao-Yang Wang said: “The smaller, faster-charging batteries will dramatically cut down battery cost and usage of critical raw materials such as cobalt, graphite and lithium, enabling mass adoption of affordable electric cars.”

In 2007, a filled, 1000-gallon inflatable swimming pool was stolen from a New Jersey backyard without a single drop of water being found.

Most tropical marine fish could survive in a tank filled with human blood.

Snoop Dogg’s real name is Cordozar Calvin Broadus Jr. His nickname came from his mother, who thought he looked like ‘Snoopy’ from “Peanuts”.

During his or her lifetime, the average human will grow 590 miles of hair.

Radio code “Wilco” (as in Roger Wilco) is short for “Will Comply”!

Question: One survey found that 53% of parents have done THIS, as a way of bonding with their kids. What is it?

A Chinese grandfather redefined the term “smoking the competition” by running an entire marathon while puffing away on cigarettes. Images of the chain-smoking athlete are lighting up Weibo — the Chinese social media platform. The 50-year-old runner, known as Mr. “Uncle Chen,” accomplished the breath-taking feat at the Xin’anjiang Marathon in Jiande, running the entire 26.2 miles while either smoking or lighting up another in a long line of cigarettes. In spite of his bad habit, and the fact that the physical act of lighting and holding a smoke doesn’t contribute to very good ‘form’, the tobacco-loving grandpa’s official time of 3 hours, 28 minutes and 45 seconds is considered “good” according to the Marathon Handbook. Uncle Chen placed 574th out of around 1,500 runners.

QUESTIONS FOR A MAN FROM A WOMAN:

• How is it you can be looking for something, be told EXACTLY where it is, and still not see it?

• How is it you never remember which day is garbage day, when it hasn’t changed for 9 years?!

• Isn’t it embarrassing how you act when you’re sick?

• Do you hear the Charlie Brown teacher every time I speak to you about my feelings?

• Why do you even try to argue with me?

• Do you really need a seat for each of your legs?

• If you speak in the forest and no one’s there to hear you, are you still wrong?

• Why is it when you watch your own kids, people say you’re ‘babysitting’?

• Why do you act like you just cleaned the entire house simply because you took out the trash?

• Are you even listening to me?


Talking about music is like dancing about architecture. - Steve Martin

Grandma, Grandson Have Dinner Paid For By Strangers In Random Act Of Kindness https://www.sunnyskyz.com/good-news