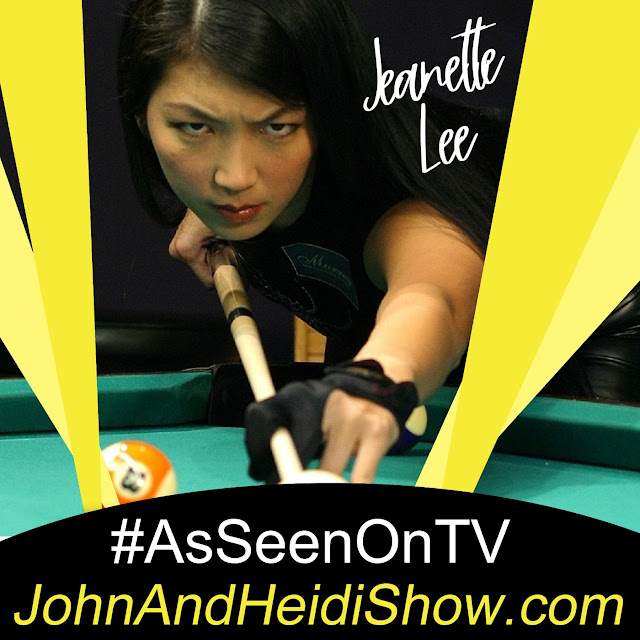 Today we visit with Jeanette Lee, the “Black Widow of Billiards” The latest ESPN 30 for 30 documentary “Jeanette Lee Vs.” premiered recently on ESPN and is also streaming on ESPN+. Stream now - https://www.espn.com/

More good news: More than 8 in 10 adults are planning to be charitable this festive season, with a quarter doing so through acts of kindness and good deeds. A survey found that the top ways people are looking to help others include by donating money (35%), cooking for those who need assistance (15%), and buying gifts from charity shops (18%). And in a positive trend, the results of the study of 2,000 Americans found that 48% intend to be more charitable this year than last. Other ways people will give back include buying charity Christmas cards (28%), and donating items, including food and clothes.

A new study has found that Santa’s sleigh could actually fly — with some major advancements. A group of physics students, inspired by the scene in 2003’s “Elf” in which Santa harnesses a jet engine to power his sleigh, performed a number of calculations taking into account the mass of the sleigh and its load of presents. They determined that in order to produce enough lift to fly during Santa’s Christmas Eve journey, the sleigh would have to move at about 10 times the speed of sound (12,300 mph, 19,800km/h). The sleigh would need a pair of wings similar to those on a commercial airplane. It would also need an engine with an equivalent thrust to that produced by NASA’s Saturn V rocket, which was used for the Apollo missions in the 1960s and 70s. The study was published in University of Leicester’s Physics Special Topics journal.

Angelina Jolie is stepping down from her role as an ambassador for the UN refugee agency UNHCR after more than 20 years. In an Instagram post, she said: “I believe in many things the UN does, particularly the lives it saves through emergency relief”, adding that she “will be working now with organizations led by people most directly affected by conflict, that give the greatest voice to them.” The UNHCR said: “Jolie has worked tirelessly, carrying out more than 60 field missions to bear witness to stories of suffering as well as hope and resilience”. LINK: https://tinyurl.com/4cd5vk34

1. If you eat a Christmas cookie fresh out of the oven, it has no calories because everyone knows that the first cookie is the test and thus calorie free.

2. If you drink a diet soda after eating your second cookie, it also has no calories because the diet soda cancels out the cookie calories.

3. If a friend comes over while you're making your Christmas cookies and needs to sample, you must sample with your friend. Because your friend's first cookie is calorie free, (rule #1) yours is also. It would be rude to let your friend sample alone and, being the friend that you are, that makes your cookie calorie free.

4. Any cookie calories consumed while walking around will fall to your feet and eventually fall off as you move. This is due to gravity and the density of the caloric mass.

5. Any calories consumed during the frosting of the Christmas cookies will be used up because it takes many calories to lick excess frosting from a knife without cutting your tongue.

6. Cookies colored red or green have very few calories. Red ones have three and green ones have five - one calorie for each letter. Make more red ones!

7. Cookies eaten while watching "Miracle on 34th Street" have no calories because they are part of the entertainment package and not part of one's personal fuel.

8. As always, cookie pieces contain no calories because the process of breaking causes calorie leakage.

9. Any cookies consumed from someone else's plate have no calories since the calories rightfully belong to the other person and will cling to their plate. We all know how calories like to CLING!

10. Any cookies consumed while feeling stressed have no calories because cookies used for medicinal purposes NEVER have calories. It's a rule!

So, go out and enjoy those Christmas Cookies - we only get them this time of year!

Before adopting turkey, the traditional Christmas meal in England was a pig’s head covered with mustard.

‘Silent Night’ is the most-recorded Christmas song (over 138,000 versions).

Rudolph was almost named Rollo. Other reindeer names before the ones we’re familiar with today were settled upon include: Flossie, Glossie, Racer, Pacer, Scratcher, Feckless, Ready, Steady and Fireball.

Tinsel was invented in 1610 in Germany — and was originally spun from real silver, making it far from the chintzy decoration it is now.

Christmas Day boasts the fewest relationship breakups – and the most engagements.

Mistletoe is an ancient symbol of fertility and virility — and the Druids considered it an aphrodisiac… but the Germanic word for mistletoe literally means “dung on a twig.”

All the gifts in the Twelve Days of Christmas added together would equal 364.

The Germans made the first artificial Christmas trees out of dyed goose feathers.

Question: Women aged 18-34 are far more likely to do THIS than older women … or men of any age.

Answer: Peek at their Christmas gifts.

A female burglar was caught going through Robert De Niro’s New York townhouse early Monday — grabbing gifts from underneath the Christmas tree and playing with his iPad, according to police. They said “known burglar,” 30-year-old Shanice Aviles, broke into the “Irishman” star’s home around 2:30am. Officers with NYPD’s 19th Precinct Public Safety team had spotted Aviles trying to open doors to commercial buildings before she made her way inside De Niro’s home. DeNiro and his daughter had been upstairs and were unaware of what was going on. Cops busted Aviles, who has 26 prior arrests, at the scene, and charges were pending at last report.

8. The Nightmare Before Christmas

"Christmas, here again. Let us raise a loving cup; Peace on earth, goodwill to men, and make them do the washing up." - Wendy Cope

Mother Of 7 Left 'Gobsmacked' By Stranger's Act Of Kindness In Supermarket
https://www.sunnyskyz.com/good-news/