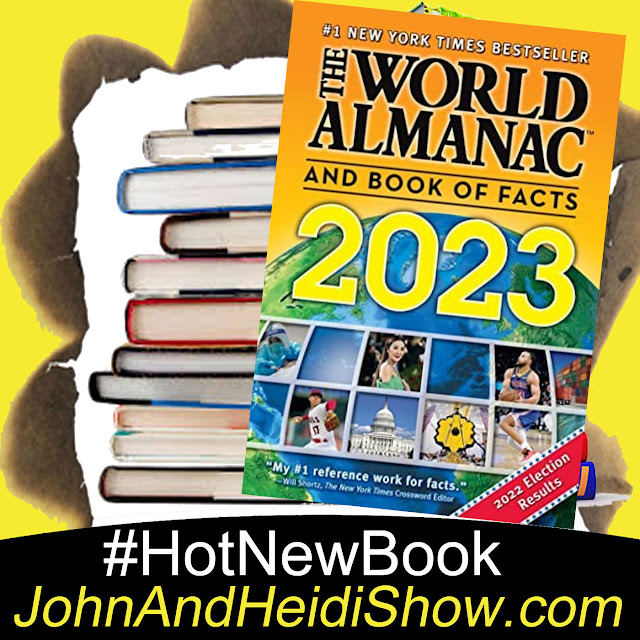 Today we visit with Sarah Janssen. She is one of the people who compile the info to create  The World Almanac! AVAILABLE NOW: https://amzn.to/3VimM5V

A good case for caroling? Research shows that group singing has many beneficial biological, psychological, behavioral, and social benefits. How? Group singing can synchronize singers’ heartbeats and breathing patterns. That can partly explain some of the positive effects of group singing such as bonding and social connection. Singing together also increases the feel-good hormone oxytocin and improves mood, helping us to bond with our fellow singers as we “perform”. Group singing also has psychosocial benefits for those living with a range of health conditions – including building resilience, enhancing mood, creating a sense of belonging and purpose, improving quality of life, and promoting well being.

The word “Christmas” means “Mass of Christ,” later shortened to “Christ-Mass.” The even shorter form “Xmas” – first used in Europe in the 1500s – is derived from the Greek alphabet, in which X is the first letter of Christ’s name: Xristos, therefore “X-Mass.” Today we know that Christ was not born on the 25th of December. The date was chosen to coincide with the pagan Roman celebrations honoring Saturnus (the harvest god) and Mithras (the ancient god of light), a form of sun worship. These celebrations came on or just after the winter solstice, the shortest day of the year in the northern hemisphere, to announce that winter is not forever, that life continues, and an invitation to stay in good spirit.

Amid a fresh round of royal revelations accompanying the most recent release of Volume 2 of Netflix’s “Harry & Meghan” comes the news that Prince William sees his relationship with Harry as “over,” damaged beyond repair by Harry’s betrayal of him and his wife, according to a source cited by The Daily Beast. The source, a friend of William and Kate’s who used also to be close to Harry, said: “It doesn’t make a great deal of difference what is in the films released this week. The general feeling that it won’t be anything they haven’t said before.” But the damage to the brother’s relationship is most definitely done, the source said, because “William will never forgive Harry for selling out his and Kate’s secrets. Harry knows, more than anyone, how much their privacy means to William and Kate because he felt the same.”

They are making a royal fuss about it. Prince Harry and Meghan Markle have demanded to have a royal summit with the entire Royal family and push for an apology regarding the alleged treatment at their hands, according to the Sunday Times. Following their Netflix documentary “Harry & Meghan” — which dropped numerous bombshells — the former royals said they want to “sit down with the royal family” and address their grievances. A source is quoted as saying: “Nothing like that was ever done when Harry and Meghan raised various concerns — no meeting, formal apology or taking responsibility or accountability”, and “they’d like to have a meeting.” Insiders say the former royals are attempting to reconcile with King Charles and the rest of the family ahead of his coronation in May — which Harry and Meghan are expected to attend.

The Duke and Duchess of Sussex have announced their next documentary series for Netflix. Prince Harry and Meghan Markle’s “Live to Lead”, will shine a light on the leaders and activists making a difference. In the trailer, Harry says: “This was inspired by Nelson Mandela, who once said, ‘What counts in life is not the mere fact that we have lived’, before Markle finishes: “It is what difference we have made to the lives of others that will determine the significance of the life we lead.” The doc will feature interviews with late U.S. Supreme Court Justice Ruth Bader Ginsburg, climate activist Greta Thunberg, social justice attorney Bryan Stevenson, New Zealand Prime Minister Jacinda Ardern, feminist activist Gloria Steinem, and more. Live to Lead premieres Dec. 31. LINK: https://tinyurl.com/36m28smx

Consumer psychologist Aaron Ahuvia, author of “The Things We Love: How Our Passions Connect Us and Make Us Who We Are”, says there are 2 secrets to giving gifts that people will love:

1. The gifts people love most are rarely the most expensive, but often the most on target for the recipient. Give a gift that shows you have a genuine curiosity about that person. Say you’re buying a gift for an avid cook. Don’t ask the cook to name a kitchen gadget — think about what this person loves about cooking, some of their favorite dishes, tools, and fools, frustrations in the kitchen. An enthusiastic curiosity can go a long way in helping you find an excellent gift.


2. A great gift either reminds the recipient of a past connection with you, fosters a future connection – or both. For example: Gift someone a game and find time to play it with them. A scrapbook – or even golf passes can have the same effect. It’ll become a loved gift if the recipient sees it as a bridge that connects the two of you.

Two of Santa’s reindeer were originally named ‘Dunder’ and ‘Blixem’ not ‘Donner’ and ‘Blitzen’.

The tallest Christmas tree ever cut was a 221-foot (67.3m) Douglas fir that was displayed in 1950 at the Northgate Shopping Center in Seattle, Washington.

The word ‘nog’ (as in ‘eggnog’) comes from the word ‘grog’ which refers to any drink made with rum.

Norwegian scientists have hypothesized that Rudolph’s red nose is the result of a parasitic infection of his respiratory system.

Question: 33% of adults admit they will do THIS by noon on Christmas Day. What is it?

In a 2020 survey, 72% of people agreed that their favorite gifts are heartfelt and unique. But the survey also identified the WORST holiday gifts out there. Avoid giving these, and hopefully you’ll never have to deal with the embarrassment of having the same thing re-gifted to you NEXT year!)

"The worst gift is a fruitcake. There is only one fruitcake in the entire world, and people keep sending it to each other." - Johnny Carson