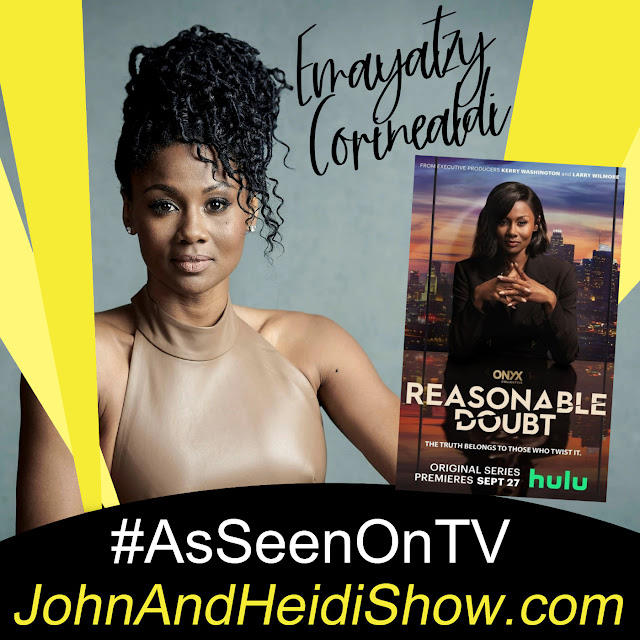 Today we visit with Emayatzy Corinealdi. She has been involved in many amazing projects like the HBO comedy series Ballers opposite Dwayne Johnson and the CBS series The Red Line opposite Noah Wylie. Corinealdi was previously best known for her breakout performance in the critically acclaimed Sundance feature Middle of Nowhere from director Ava DuVernay. She also starred as the female lead opposite Don Cheadle in the Miles Davis biopic Miles Ahead as well as Karyn Kusama's psychological thriller The Invitation. Her television roles included the Emmy-nominated History Channel adaptation of Alex Haley’s mini-series Roots, as well as the Amazon original series Hand of God opposite Ron Perlman. We'll visit about her latest program “Reasonable Doubt”, now available for streaming on Hulu. https://www.hulu.com/

Every little bit of physical activity helps when it comes to avoiding severe COVID-19. Those who were more physically active before being diagnosed with COVID-19 — even those with chronic illness — had a lower risk of severe outcomes, according to a large-scale study presented in the American Journal of Preventive Medicine. People “who were consistently inactive were 191% more likely to be hospitalized and 391% more likely to die than those who were consistently active”, no matter their age or ethnicity, the researchers said. According to lead author Deborah Young, we “need to view physical activity as a pandemic-mitigation strategy”.

If you want a delicious and sustainable dinner, consider swapping your red meat with Spirulina. Research from Israel suggests a daily diet that includes the blue-green algae can boost your health and slow down climate change. Spirulina algae is considered a superfood for its rich protein, iron, and essential fatty acid content. Compared to beef, spirulina is a far superior healthy food choice and would serve as a sustainable meat substitute. The stuff is cultivated in Iceland, which study authors say could be the site for future mass production.

The 1989 rom-com “When Harry Met Sally” is one of 25 films chosen this year to enter the National Film Registry, a list that ranges from Disney’s “The Little Mermaid” to a 1898 silent documentary, long thought lost, about the Mardi Gras parade in New Orleans. Also chosen this year for preservation: Marvel’s “Iron Man,” John Waters’ “Hairspray,” Brian de Palma’s “Carrie” and the 1950 “Cyrano de Bergerac” starring Jose Ferrer, whose performance made him the first Hispanic actor to win a best actor Oscar. The registry is housed at the Library of Congress, which selects movies for preservation based on their cultural and historic importance.

Whether from stress, cold weather or simply falling out of good habits in terms of eating, sleeping and drinking, heart attack rates spike as much as 40% between Christmas and New Year’s, according to cardiologist Dr. Donald Lloyd Jones, chair of preventive medicine at Chicago’s Northwestern University Feinberg School of Medicine. He said that looking at heart attack rates, we see “fairly constant rates week by week with two exceptions: One is that there’s a broad, shallow dip in summer months and, two, there is a…spike of about 30-40% in the last couple weeks of the year.” Lloyd-Jones feels that in addition to things like excessive food and alcohol and cold temperatures, the spike could also be a result of the stresses of traveling, and of preparing for the holiday season, as well as the exertion of doing things like shoveling snow.

Just one in 3 consumers pays off his or her credit card bill every month.

Las Vegas is NOT the largest gambling centre in the world. Macau surpassed it in gambling revenues in 2006.

In the middle-ages, dead bodies were often used as ammunition in catapults.

Question: People who have more than 100 of THESE live 6-to-7 years longer on average than those with none or just a few.

Life moves pretty fast — but this car does not. An iconic prop Ferrari from “Ferris Bueller’s Day Off” sold for a cool $337,500 on Saturday — even though it doesn’t actually drive. The replica Ferrari 250 GT California was used in the scene where ‘Cameron Frye’ (played by Alan Ruck) accidentally causes his dad’s prized ride to crash through the garage window to the woods below. Since a genuine California Spyder Ferrari is one of the most sought-after classic cars, producers chose to have 3 highly detailed copies made for the 1986 flick. The prop car was rebuilt as a display piece after production ended.

Check out the 10 best (and 10 worst) cities for pastry lovers below, followed by key insights from our report. (See where your city ranks.)

Trouble knocked at the door, but, hearing laughter, hurried away. - Benjamin Franklin