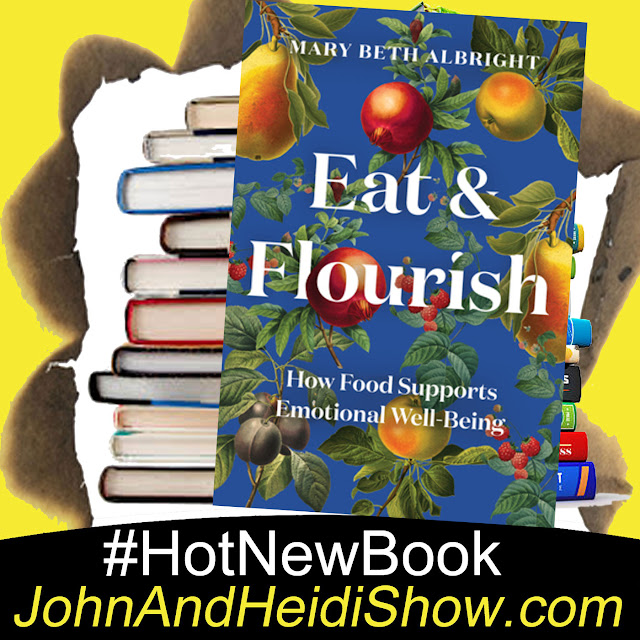 Today we are going to visit with author Mary Beth Albright about her new book “Eat & Flourish: How Food Supports Emotional Well-Being” A lively and evidence-based argument that a whole food diet is essential for good mental health. AVAILABLE NOW: https://amzn.to/3G7E8wB

Home insurance group, Hippo, is out with its 2022 Hippo Housepower Report, a national survey of over 1,000 U.S. homeowners. 78% of respondents have had regrets about purchasing their homes within the last 12 months. The experts at Hippo offer insights on the right tools for homeowners to feel the Housepower, confidence and control to tackle anything homeownership brings. https://www.hippo.com/

Amazon Studios has confirmed it has secured global rights to the “Warhammer 40,000” game for “Man of Steel” Henry Cavill to star in and executive produce the franchise. The agreement encompasses rights to the universe across TV series, film and likely games and animation. Warhammer 40,000 is a miniature wargame produced by Games Workshop in which players enact battles using miniature models of warriors and fighting vehicles. It is set in the distant future, where a stagnant human civilization is threatened by hostile aliens and supernatural creatures. Cavill just exited his DC role as ‘Superman’ and left his starring role in Netflix’s “The Witcher” after 3 seasons.

To some, there’s no greater inconvenience than a flight cancellation. But rather than sulk about their sudden change of plans, an enterprising group of passengers whose trip from Orlando FL to Knoxville, TN was shelved, instead decided to rent a van together and hit the road. 13 of them made the 650-mile (1050km) trip together, sharing stories and documenting their journey on TikTok. The passengers spanned ages and backgrounds: One was a teen visiting a college with her parents, another with a critical appointment in a custody case; a minister, a farmer who only spoke Spanish; an influencer, and a recent college grad. Although more than a few bathroom stops added to the trip’s 9½ hours of driving time, they all made it to their destination safe and sound. And as one passenger said, noting that everyone got along brilliantly: “I feel like this situation for me specifically…restored my trust and humanity…There’s definitely hope for people…they can be good.” LINK: https://tinyurl.com/4bhafvnh

Your brain uses only about one-tenth of a calorie per minute.

Mushroom clouds can be created by any huge explosion.

One trait of intelligent people is being easily annoyed by others, but saying nothing in order to avoid a meaningless argument.

Like humans, ants spend only about a fifth of their day working.

Question: 7% of people say they have done THIS in the bathroom. What is it?

In Toulon, France an 88 year-old showed up at the hospital and reported that he had inserted an object up his rectum and couldn’t remove it. No problem, let’s take you into x-ray and take a look. Hold on…that looks like…an artillery shell?! Not taking any chances the hospital was evacuated and incoming patients diverted until the situation could be further assessed. The man told them it was indeed a World War I artillery shell, eight inches long and two inches wide, that he had inserted up his backside for “sexual pleasure.” The man was taken into surgery where the shell was removed without incident. Shell-shocked doctors and bomb disposal experts said that, while it was possible, it was unlikely the shell would have exploded inside the man.

• Do you have anything to do if you work at a ‘Duty-Free Shop’?

• Do we now call them ‘wetlands’ because no one would give environmentalists money to save a ‘swamp’?

• If you go to the ‘Missing Persons Bureau’, is there anyone there?

• If a bouncer gets drunk, who throws him out?

• What exactly is ‘midair’? Is there some other part of air besides the ‘mid’ part?

• If you get cheated by the ‘Better Business Bureau’, who do you complain to?

• When will all the rhetorical questions end?

Inside me there’s a thin person struggling to get out, but I can usually sedate him with four or five cupcakes. - Bob Thaves