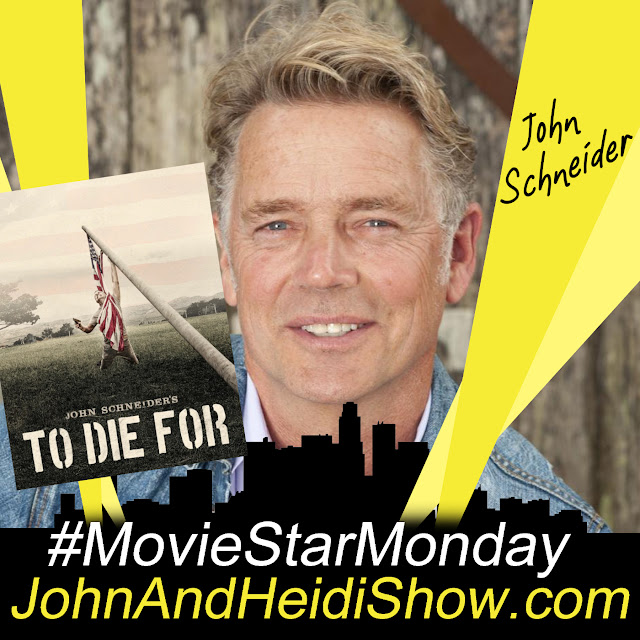 This #MovieStarMonday we visit with John Schneider (Dukes Of Hazzard) about his latest movie “To Die For”. This film is based on several true stories all stitched together to show how each little thing is one step further from the freedoms we all enjoyed and many took for granted.

As we enter the holiday season, or as we call it in my family, “the eating season”, new research shows that a quarter of us are still carrying the weight we gained at the end of last year. A survey of 2,000 people shows that 60% of us gained weight toward the end of 2021, probably due to the fun and food of the season. But despite the fact that 24% of us never lost our holiday weight gain, we’re still planning to go hardcore again this year — in fact, 4 in 10 respondents (42%) are using the end of the year as an excuse to postpone eating healthily. Conducted by OnePoll, the survey, conducted in the US, found that 60% of those planning to postpone their healthy habits over the holidays — have already started, admitting mid-November is their cut-off. The average respondent expects to gain 5½ pounds (2.5kg) before 2023 — and that’s on top of any weight they’re still carrying around from last year’s indulgences. On the plus side, 46% plan to make a New Year’s resolution. The most common one is to save more money, followed by eating healthier and exercising more.

A new study has found that bats have a better vocal range than Mariah Carey. According to the research by the University of Denmark, bats can reach a vocal range of 7 octaves — nearly double that of a normal human being. Lead author Prof. Coen Elemans said: “Most mammals have a range of 3-4, and humans about 3. Some human singers can reach a range of 4-5, but…very few. Well-known examples are Mariah Carey, Axl Rose and Prince.”

Dwayne ‘The Rock’ Johnson spent Sunday to “right the wrong” back home in Hawaii. The 50-year-old shared 2 Instagram posts detailing his trip to a 7-Eleven where he stole king-size Snicker bars as a kid. Johnson walked into the store and straight to the chocolate aisle. He emptied the entire stock, walked up to the cashier and paid $298 for the lot. He wrote that back in 1987, he was broke, so he “used to steal a king-sized Snickers EVERY DAY from 7-11 for almost a year when I was 14yrs old, on my way to the gym. The Snickers was my pre daily workout.” Johnson said that whenever he returned to Hawaii, he was reminded that he “needed to go in and clean out every Snickers bar they had – the right way.” LINK: https://tinyurl.com/mr49uses

The official trailer has dropped for “1923”, the latest prequel in the “Yellowstone” saga, coming next month. In the trailer for Taylor Sheridan’s new series, which stars Helen Mirren and Harrison Ford as ‘Cara’ and ‘Jacob Dutton’, fans get their first extended look at the Dutton’s early conflict with Timothy Dalton’s ‘Donald Whitfield’, who moves into the ranch next to theirs. As Whitfield’s intention to take over the whole valley becomes clear, Cara makes it clear to her new neighbor, “Well, this is the Yellowstone, and you have no rights here.” Soon after, Jacob approaches the sheriff about starting a range war with Whitfield. 1923 will premiere on the Paramount Network and on Paramount+ Dec. 18. LINK: https://tinyurl.com/4nzch2bw

The Netflix original series about Meghan Markle and Prince Harry may have its release date at last. Sources close to the production say it will drop on Thursday, Dec. 8. This is surprisingly soon, especially considering that the docuseries still doesn’t even have a title. The Duke and Duchess have been quietly working with Netflix on a documentary series about their lives, but their plans to release it have become complicated. Reportedly, Netflix decided to hold off on releasing it after the generally negative reaction to “The Crown” Season 5. This series is part of a multi-million-dollar deal that the Sussexes struck with the streamer when they first left their royal duties behind and moved to live in the US.

“Good” cholesterol might not be as good as we thought, according to a new study. High-density lipoprotein (HDL) has been referred to as “good cholesterol” by medical experts, because it absorbs “bad” cholesterol”. But a new study carried out by researchers at Oregon Health & Science University shows that high levels of HDL (good) cholesterol aren’t always associated with a lower chance of cardiovascular events. What’s more, low levels of HDL (good) cholesterol were found to have increased cardiovascular disease risk for White patients, but the same wasn’t true for Black patients.

The widely-held belief that humans need to drink eight 8-ounce glasses of water a day — also known as the 8 x 8 rule — is simply not true, according to scientists. Researchers from the University of Wisconsin-Madison conducted the most comprehensive research on hydration and the human body to date, measuring the water consumption of more than 5,600 people from 26 countries. They found that water consumption varies widely around the world, ranging from about 4 to 25 cups a day. Water needs peak for men in their 20s, while they remain level for women from age 20-55, but only vary by about 2 glasses for each gender, with men requiring more. Physical activity level contributed to the largest differences in water turnover, followed by gender, the Human Development Index (those living in less-developed countries require more drinking water), and age.

It takes an average of 2 months to climb Mount Everest.

The world seems quieter right after a snowfall because the blanket of fresh powder absorbs sound, making things seem “calmer.

Coconut shells can absorb more impact than most crash helmets.

The Battle of Waterloo (1815) wasn’t fought in Waterloo. It was fought in Pancenoit, Netherlands, 4 miles away.

The day after tomorrow is called “Overmorrow.”

Question: 33% of THESE happen between now and New Year’s Day. What are they?

A company is selling a video game system – for dogs. The Avdar company says its “Joipaw” games aren’t just fun, but they will also “unleash your dog’s cognitive potential.” The Joipaw console includes “a dog-tailored touchscreen, a height-adjustable stand and an automated treat dispenser,” plus “running interactive puzzle games that are constantly new and challenging.” How does it work? Dogs wear a tracker on their collar, and it sends data on their activities to an app – things like steps, time spent resting, playing, walking, etc. The dog also plays games on the console and receives treats when they’re successful. All the while, the system “gathers cognitive data in the background, which is also shown in the app.” The doggie-video game system also includes speakers, a microphone and an HD camera. The company, which calls it “the smartest dog tech product to ever hit the market,” is now taking orders for Joipaw, which it hopes to build into “Apple Health, but for dogs.” LINK: https://joipaw.com/product/joipaw-console/

A recent AskReddit thread gave answers to the question: “What is the most underrated Christmas gift?” Here are some of the best…

☞ “At work, we were doing the white elephant thing…The plan was to buy goofy, funny things…When I opened mine, it was a 124-pack of toilet paper. Everybody thought it was funny, but I’ve never even come close to receiving a gift as amazing as that.”

☞ “Restaurant gift cards, especially for local, non-chain restaurants. You give them a reason to go eat out with their S.O. It’s thoughtful and usually will bring them a lot of joy.”

☞ “Every year, my grandma would get everyone toilet paper, deodorant, toothpaste, Q-Tips…didn’t realize how great it was until she was gone.”

☞ “Premium subscription to something the person already uses the free version of. They’re guaranteed to use it, and it’s something they’ve decided that they weren’t going to splurge on themselves for.”

☞ “One year, when I was pretty broke, someone gave me a nice tote filled with non-perishables. I suddenly had a nice stockpile of stuff like soup, crackers, and cookies, and on top of that, had a tote to store stuff in when I emptied it! It was way more useful to me than a soap set or something…”

☞ “Pet toys. I love when people remember my kitties.”

“A committee is a group that keeps minutes and loses hours.” – Milton Berle

If evolution really works, how come mothers only have two hands? -Milton Berle

My doctor told me that jogging could add years to my life. I think he was right. I feel ten years older already. - Milton Berle

100 UK Companies Sign Up For 4-Day Work Week With No Loss Of Pay
https://www.sunnyskyz.com/good-news/