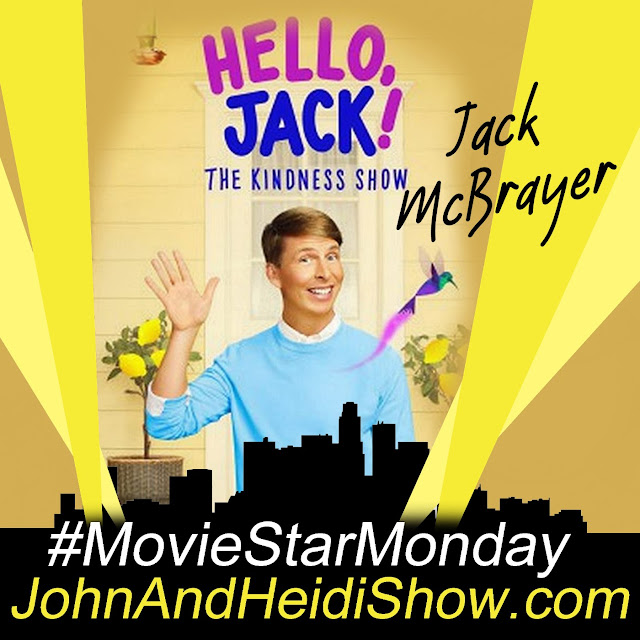 This #MovieStarMonday we visit with Jack McBrayer, actor and comedian, who gained national exposure for his portrayal of characters on Late Night with Conan O'Brien and as Kenneth Parcell in 30 Rock.

We will visit about the second season of his Apple TV+ kids show "Hello, Jack! The Kindness Show" apple.com

In light of skyrocketing inflation, most people have made an effort to cut personal spending…whether it’s because they HAVE to, or just out of principle, as in: “You want me to pay HOW MUCH for THAT?” But what do you absolutely refuse to reduce your spending on? A new poll of 2,000 adults in the US found that no matter how tight things get, 44% wouldn’t cut spending on their health and wellness. In the OnePoll survey, 8 in 10 said, yes, they have cut down on their general spending within the last 6 months. Three-quarters said they have been affected by inflation. In what areas have people reduced spending? Shopping came in first, with 70% of respondents saying they’ve cut some corners there. That was followed by entertainment (59%) and food (58%). Half of those surveyed (49%) said they plan to spend MORE of their budget on their health and well-being in 2023.

The average couch has been a part of 311 arguments, 316 drink spills, and 286 episodes of makeup sex, according to a poll. On average, a sofa will stay in someone’s home for 8 years, being the location of 401 naps, and playing host to 8,500 hours of TV time. The study of 2,000 adults in the UK, commissioned by British furniture company Sofology, also found the typical couch suffers 65 scribbles from kids, and sees men sleeping on it a total of 269 times after a fight with their significant other or a drunken night out. The average couch will double as cinema seating 537 times over its lifetime — and will swallow the remote control 346 times.

Months after the end of their defamation trail, Amber Heard has made an official legal move against her ex-husband, Johnny Depp. Heard’s legal team has filed a new appeal, arguing that since a separate trial previously ruled in favor of Heard regarding her claims of abuse against Depp, then the jury in their most recent trial should not have been able to find him innocent. They also argue that the trial should have been held in California instead of Virginia. The legal papers also state that Heard believes the outcome will “undoubtedly will have a chilling effect on other women who wish to speak about abuse involving powerful men.” She is seeking to have the verdict overturned, thrown out, or for a whole new trial.

The search was on this year, for Johnny Depp, Amber Heard, Will Smith, Chris Rock and Jada Pinkett Smith: They topped Google’s just-released list of the Top 10 actors who generated the most Google searches in 2022. Not only did the 5 celebs top Google’s year-end list of the most-searched actors, they also accounted for 4 of the top 5 spots on the overall “People” list, with the only non-actor in there being Vladimir Putin at #4. The most-searched movie? “Thor: Love and Thunder”, beating out runners-up “Black Adam” and “Top Gun: Maverick”. Among TV shows, searchers were most curious about “Euphoria”, with “House of the Dragon” at #2.

A smart bandage that makes a serious wound heal 25% faster has been developed by scientists at Stanford. They say the battery-free and flexible device monitors wounds and delivers treatment at the same time. It could help diabetics with painful leg or foot ulcers that last for months, as well as other patients with chronic injuries. The state-of-the-art dressing repairs tissue by combining electrical stimulation and biosensors. It boosts skin closure by fueling blood flow to the site, dramatically reducing scar formation. Circuitry uses temperature detectors to identify problems, such as an infection, and apply more electrical stimulation if required. The electronic layer is just 100 microns thick – about the thickness of a human hair.

Scientists say they have finally developed a urinal that will drastically reduce “pee splashblack”. The team, from the University of Waterloo in the UK, says that due to the tall, narrow design that’s met with a curving inner surface, the “splashback-free urinal” prevents any droplets from ricocheting off, no matter where you aim. The design was inspired by observing how dogs pee, and the fact that they instinctively know how to raise their hind legs, resulting in no mess. Researchers found that the critical angle that results in the tiniest splash is about 30°.

NONE of the passengers on the Mayflower had middle names.

The little bumpers on the underside of a toilet seat are called ‘buculets’.

A balanced diet for a human is about the same as that of a rat.

Statistically, the safest form of travel (miles traveled versus number of deaths) is the elevator.

Due to Plate Tectonics, Europe and North America are drifting apart at the same speed a human fingernail grows.

Barry White’s music has been used by marine biologists to encourage sharks to mate.

Question: If you gave THIS as a Christmas gift last year, there’s a 20% chance it hasn’t been used yet. What is it?

A 72-year-old woman was arrested after she allegedly switched off a hospital roommate’s ventilator – twice – because she was annoyed by the sound it made. The woman was jailed on suspicion of attempted manslaughter following the incident at a hospital in the city of Mannheim. She is alleged to have switched off a 79-year-old woman’s ventilator and, despite then being told by staff that it was vital for the patient, switched it off again later in the evening. The older patient had to be revived and, while her life is not in danger, she still requires intensive care. The suspect was taken to jail.

Pet care company Rover.com has released its list of the most popular pet names of 2022 (in the US). The pet website identified the top 100 pet names that were attached to male and female dogs and cats, after diving “deep into the Rover database of over a million pet parents to determine the most popular dog [and cat] names of 2022”. Here are the top-10…

If you want to look thin: hang out with fat people. - Rodney Dangerfield

A Random Act Of Kindness Sparked A Family's Decade Of Giving During The Holidays https://www.sunnyskyz.com/good-news