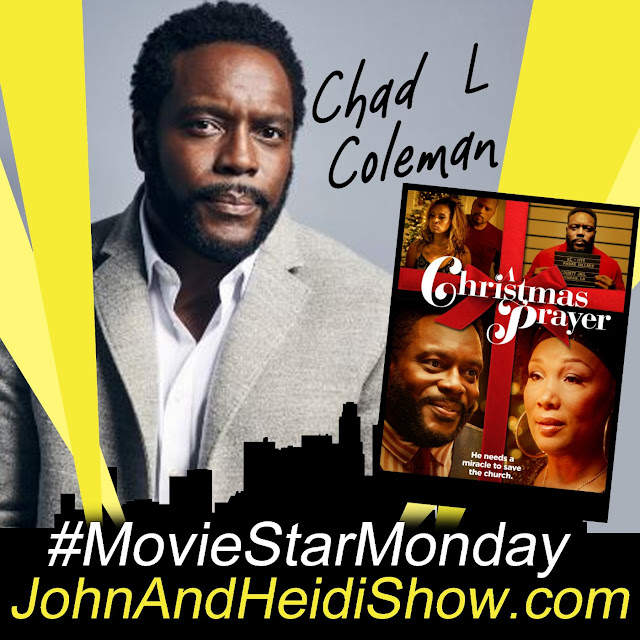 This #MovieStarMonday we visit with Chad L Coleman (The Wire, The Walking Dead, It's Always Sunny in Phil..) about his new movie A Christmas Prayer
AVAILABLE NOW: https://www.imdb.com/video/

Gen-Z and millennials are the workers most likely to call in sick, according to a new survey. A poll of 2,000 US adults found that 41% of workers are likely to call in the moment they feel themselves getting sick. And only about a third (32%) said they don’t feel bad at all about bailing on work when they’re sick. While the younger workers in the Gen-Z and millennial age groups were more likely to call in sick (36% and 45%, respectively), older generations like Gen-X and baby boomers were found to be more willing to work through their illness (30% and 47%), rather than miss work.

According to many influencers, “tramp-stamps” are making a comeback. The lower-back tattoo, deserved or not, became synonymous with the somewhat trashier lifestyle of the 1990s. But Gen Z’s love of the decade has seen them returning to popularity. A 2011 study found that the body artwork, referred to as “tramp-stamps,” became unfairly associated with promiscuity. But this time around, the tattoos are seen as more empowering rather than embarrassing.

Henry Cavill is hanging up his cape, and now we know why. The 39-year-old revealed Wednesday he won’t be reprising his role as ‘Superman’ in James Gunn’s latest film. On Instagram, he wrote: “I have just had a meeting with James Gunn and Peter Safran and it’s sad news, everyone. I will, after all, not be returning as Superman.” The news may surprise followers, especially considering that Cavill announced on Oct. 24 that he was coming back to play ‘Clark Kent’, even sharing a teaser image on Instagram. But, it seems that things have changed. He continued: “After being told by the studio to announce my return…this news isn’t the easiest, but that’s life…James and Peter have a universe to build. I wish them and all involved with the new universe the best of luck…” Gunn, recently named co-chairman and co-CEO of DC Studios, tweeted that the next Superman film will focus “on an earlier part of Superman’s life, so the character will not be played by Henry Cavill.”

Eddie Murphy will receive the Cecil B. DeMille Award at the 80th Golden Globe Awards. Murphy, a previous Globes winner and 6-time nominee, will be on hand to accept the award at the ceremony, set to air live Jan. 10 from the Beverly Hilton hotel. The Cecil B. DeMille Award has been handed out since 1952. Chosen by the HFPA board of directors, it “is presented to a talented individual for their outstanding contributions to the world of entertainment.” This year’s recipient for the TV equivalent, the Carol Burnett Award, is expected to be announced shortly.

In an experiment using bright green lasers and camera equipment, scientists from the University of Colorado Boulder were able to visualize airborne particles, invisible to the naked eye, that are shot into the air when a lidless toilet is flushed. While it’s been known for decades that these tiny particles are released into the air upon flushing, this study is the first to directly visualize this, to measure how fast and far the particles spread. The scientists found that in just 8 seconds, the particles shot out at speeds of 6.6 feet per second, reaching 5 feet above the toilet, with the bigger droplets landing on surfaces within seconds, while the smaller ones linger in the air for minutes or longer. These particles can transport pathogens, including bacteria, viruses, or other micro-organisms, that can cause disease, which could potentially expose risk in public bathrooms.

Researchers at University of London have found that found that curse words in most languages sound alike. Across many unrelated languages, swear words are less likely than other words to include the consonant sounds L, R, W or Y. And more family-friendly versions of curses often have these sounds added, just like the ‘R’ in “darn” or “frick”. Another thing that swear words in different languages tend to have in common: They’re often short and punchy. They also tend to include the sounds P, T or K. Why? One researcher said: “These sounds are called stop consonants because they interrupt the airflow when we’re speaking.” The finding suggests that some underlying rules may link the world’s languages, no matter how different they are.

Contrary to popular belief, lightning travels from the ground upward, not from the sky downward.

An elephant’s tooth can weigh as much as 12 pounds.

The energy of a discharge of an electric eel could start 50 cars.

If you take a plant with you on a long airplane flight, it, too, will suffer from jet lag.

Pageant Models often smear Vaseline on their teeth so their lips won’t stick when smiling.

It costs almost $290,000 per year in fees to run a hot dog cart near the Central Park Zoo in New York City.

Question: One in 10 people say they’d like to be buried with THIS when they pass away. What is it?

South Koreans are about to get a year or 2 younger, thanks to a new law that aims to standardize how age is calculated in the country. Currently, it’s common for South Koreans to have not just one age, but 3 — an “international age,” a “Korean age” and a “calendar age.” In South Korea, a person’s “international age” refers to the number of years since they were born, and starts at zero – the same system used in most other countries. But when asked their age in informal settings, most South Koreans will answer with their “Korean age,” which could be 1 or 2 years older than their “international age.” Under this system, babies are considered a year old on the day they’re born, with a year added every January 1. To make things even more confusing, sometimes South Koreans also use their “calendar age” – a kind of mash-up between international and Korean age – which consider babies as zero years old the day they’re born, and adds a year to their age every January 1. Using ‘Gangnam Style’ singer Psy as an example: He was born December 31, 1977, so he’s considered 44 by international age; 45 by calendar year age; and 46 by Korean age. To end confusion, the country’s parliament has decreed that from June 2023, all official documents must use the standard “international age.”

The man who went viral over the summer for listing off the reasons his wife has yelled at him – is back. This time, the Maine comedian, who posts as “the_leighton_show” on Instagram, hilariously reads “texts from your college freshman” submitted by parents. Here are some of what must be the dumbest things college kids have ever texted their parents . . .

• “Daughter asked what blinker she should use to go straight.”

• “Driver pulled in front of us, my son screamed ‘quick, press the honk button!’”

• “Two students got in a car accident and exchanged health insurance info.”

• “Daughter kept referring to her insurance co-pay as a cover charge.”

• “Daughter thought the Brita pitcher refilled itself with the humidity in the refrigerator.”

• “Daughter asked how I make pancakes round.”

• “(My) college freshman asked if the Pink Panther was a lion.”

• “Boy getting ready for college: ‘Ugh…I need a pap smear.’”

Sports are the reason I am out of shape. I watch them all on TV. - Thomas Sowell

Dog Reunited With Family 7 Days After Falling From Cliff
https://www.sunnyskyz.com/good-news