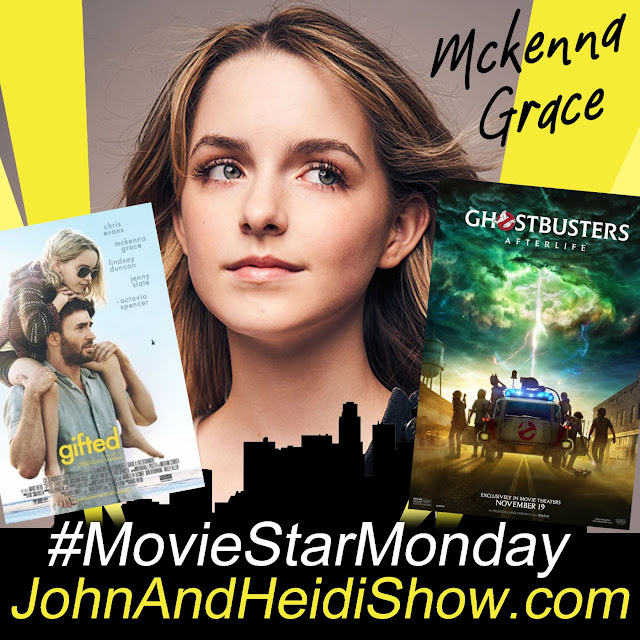 This #MovieStarMonday we visit with Mckenna Grace. (Gifted, Ghostbusters Afterlife) In addition to being an amazing actress, she is also an Emmy nominated singer and songwriter. She recently released a song called “Self Dysmorphia” to let people know that they are not alone in feeling like they're not perfect enough for the expectations of the internet. https://www.youtube.com/watch?v=tkBelHyxYmg

Uber Eats has released its 2022 cravings report. It’s a snapshot of the most popular, unusual and unique delivery requests and trends across the US over this past year. Here are some highlights . . .

• In almost all 50 states, the most frequent special instruction on food orders was “no onion.”

• Other frequent instructions include “no tomato” and “extra sauce”.

• Requests for ranch dressing have dramatically dwindled in recent years.

• Amid this year’s “sober curious” movement, there was a big spike in requests for non-alcoholic beverages, including a 300% increase in orders of zero-proof beers, wines and spirits.

• The most popular food and alcohol pairings included: steak and margaritas, pizza and White Claw

The first Lego stores in Israel opened earlier this year and one is now home to the world’s largest Lego menorah. A menorah built with 136,000 single bricks is on display at the Lego store in Tel Aviv’s Dizengoff Center shopping mall. It was built by hundreds of children and families over 3 days as part of the Hanukkah Lego festival. The menorah is 4.5 meters (15 feet) in height and 4.4 meters wide. Menorahs are lighted each day of Hanukkah, which started Sunday and continues through Dec. 26.

A lot of people have been saying Brendan Fraser’s name wrong the whole time. Last week, “The Whale” star sat down for an “Actors on Actors” video for Variety with his old “Airheads” co-star Adam Sandler. After Sandler accidentally mispronounced Fraser’s surname, The star of “The Mummy” films cleared up the confusion and shared a rhyming trick to help fans remember how to say it correctly. Quote: “It’s Fraser. You shave with a razor.” That’s right — Fraser rhymes with razor. It seems that over the years, fans and industry types alike have tended to pronounce his name ‘Frasier’, as in Kelsey Grammer’s TV psychiatrist Dr. ‘Frasier Crane’. Fans will be hearing Fraser’s name a lot more as his new movie The Whale continues to generate buzz this award show season.

End of year bonuses are always welcomed, but this company went above and beyond. Ruppert Landscape gave employee bonuses of $7,000 – $200,000 to all employees with a tenure of over 1-year, “as a thanks for the role they’ve played in the company’s growth and development.” A total of 1,200 workers received the enormous thank you presents — which added up to . . . $28 million. CEO Craig Ruppert said: “This bonus is money that is well-deserved and a way for us to acknowledge the value of our teams’ contributions and the essential role that they will play in our company’s future.” The Maryland-based company has 30 locations in 9 US states.

The movie “It’s a Wonderful Life” was a box office flop. It wasn’t until 1974, when its copyright expired and TV networks could air it for free, that it became a beloved Christmas movie.

Will Ferrell consumed so much sugar while filming “Elf” that he actually became physically ill.

In Slovakia, it is a tradition to keep “Christmas Carp” in the family bathtub for a few days before they are eaten.

Although gingerbread houses date back to the 1600s, the tradition became widespread in Germany after the story of Hansel and Gretel was published in 1812.

The Elf on the Shelf was inspired by the creators’ own toy elf, Fisbee, who they grew up with in the 1970s.

Paul McCartney earns about $400,000 each year from his song ‘Wonderful Christmastime’, which is widely regarded as his worst song.

Question: A survey says that 36% of us plan on doing THIS all day on Christmas? What is it?

Answer: Staying in our pajamas!

Kevin Federline and Jamie Spears are writing a book about (ahem!) parenting. Britney Spears’ ex-husband is “writing a book on his experience of fatherhood” — and the pop star’s estranged dad has “agreed to help,” says journalist Daphne Barak. Barak has interviewed both Federline and Jamie Spears in recent months, and told a reporter that the 2 “are now speaking to each other once again” following a rough patch in their relationship. In September 2019, Federline obtained a restraining order against Jamie after the Spears family patriarch allegedly abused his grandson Sean Preston, whom the former backup dancer shares with Britney.

THE YEAR’S MOST MISPRONOUNCED WORDS:
(among newsreaders and others on TV, according to The Captioning Group…)

✗Adele (uh-DALE): In a livestream, she applauded a London fan who pronounced her name “perfectly.”

✗Edinburgh (ED-in-Bruh or ED-in-Buh-Ruh): The capital of Scotland was mentioned often in the news this year as Queen Elizabeth II’s body made its way to Holyroodhouse after her death in Balmoral.

✗ Domhnall Gleeson (DOH-null): He’s is the actor known for playing ‘Bill Weasley’ in the “Harry Potter” series, as well as starring in the 2022 miniseries “The Patient.” And his brother Brian (known for his role in “Peaky Blinders”), his name is pronounced “BREE-an,” not “BRY-an.”

✗ Negroni Sbagliato (ne-GRO-nee spah-lee-AH-toh): The alcoholic beverage was introduced to the world by “House of the Dragon” star Emma D’Arcy, whose social media mention of the drink received more than 14 million views.

✗ Novak Djokovic (NO-vak JO-kuh-vich): In January, the tennis star was deported from Australia and not allowed to compete in the Australian Open after failing to comply with COVID regulations.

✗ Zaporizhzhia (zah-POH-reezha): The city in Ukraine that is home to Europe’s largest nuclear station.

Love conquers all things except poverty and toothache. - Mae West

'I Got My Family Back': Cat And Woman Reunited In Multi-State Miracle
https://www.sunnyskyz.com/good-news