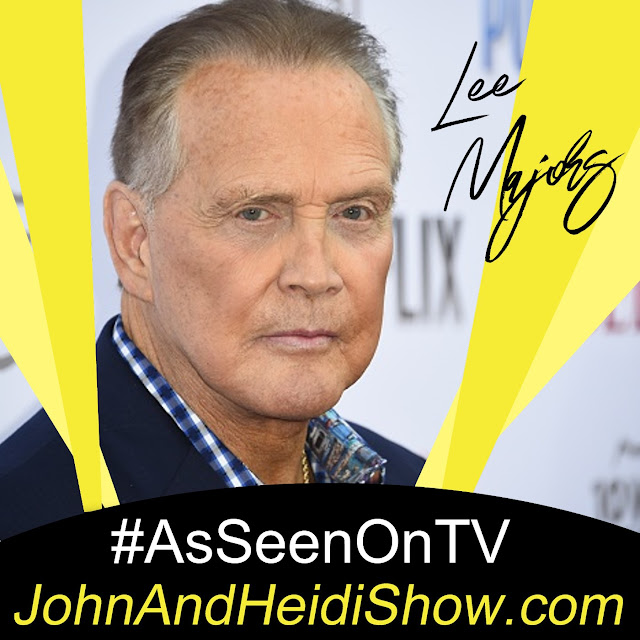 We'll talk about his new action packed movie RENEGADES. It was in select theaters over the weekend and is available on Demand and Digital now!

Do you always wake up with that groggy “morning after the night before plus it’s Monday” feeling? University of California scientists believe they found a foolproof 3-step formula to turn sluggishness into a refreshed morning feeling. The problem? It’s gonna be tough…

• Do strenuous exercise: Exercising helps you sleep well at night, which leads to superior alertness and higher mood levels throughout the next day.

• Get 7-9 hours of sleep: While that amount is ideal, getting just a little more than usual can help. Sufficient sleep helps clear the body of a chemical called adenosine, which makes us feel tired and builds up throughout the day.

• Eat a hi-carb, low-sugar breakfast: The scientists found breakfasts with a lot of sugar left test participants feeling groggy following a spike in blood sugar levels, but a breakfast rich in carbs was found to help increase alertness.

A psychologist says that you can tell a lot about a person’s personality based on when they do their holiday decorating. Dr. Carmen Harra claims that if you hang decorations before November 1st, you might have trouble “living in the moment”— but that’s not necessarily bad. It could mean “You enjoy planning and executing well ahead of schedule, to avoid the rush”. If you tend to decorate in November or early December, you also like to get things done ahead of schedule, but in addition, it shows “that you genuinely look forward to the holidays because you have plenty of time to add to or change your decorations before the big day.” Those who light up their homes in early December are “more realistic in nature” and like to do things the “correct and proper” way. So, what about those who wait to decorate until the week — or even the day — before Christmas? That signals procrastination and tardiness. Dr. Harra says these people “prefer to see Christmas come and go” — possibly because it doesn’t have the same happy feeling as when they were kids — but they still make an effort to keep the decorating tradition going.

Jonah Hill is legally changing his name — but you won’t need to call him anything different. According to documents, the actor — whose real name is Jonah Hill Feldstein — filed a petition this week in L.A. to legally drop ‘Feldstein’ from his name. So, really, he’s just making his stage name official. The docs say Jonah simply wants the name he’s publicly gone by for years to be his legal name now. Last month, “Breaking Bad’s” Aaron Paul, whose last name is actually ‘Sturtevant’, also filed for a legal change — to ‘Paul’.

A study found that social media can hurt a student’s chance to be accepted into some colleges.

Antidepressant use among pets is on the rise. Vets say that pets need meds when they start acting distant, lazy, or disobedient.

Britney Spears made the internet do another double take Friday night – and this time, she didn’t have to take her clothes off to do it. On the singer’s 41st birthday, she posted a tribute to her estranged sister Jamie Lynn Spears. Britney wrote: It’s my b-day but you’re my heart so I’m thinking about you.” Adding, “Congratulations on being so brave, inspiring, and showing guts and glory in your show!!!. You ain’t alone … I get it. My baby sister!!! I love you !!!” Britney’s Instagram post took the internet for a loop following the siblings’ longtime, very public feud. In January, Jamie Lynn received a cease-and-desist letter from Britney’s attorney ahead of her book tour for her memoir, “Things I Should Have Said.” Following a clapback from Jamie Lynn, Britney called her sister “scum” on social media, and said in a quickly-deleted post that she “should have slapped” her “selfish little brat” sister and mother, Lynne. LINK: https://tinyurl.com/2572f7ws

Fried maple leaves are a popular snack in Japan.

The official bird of Redondo Beach, California is the Goodyear Blimp.

Calling “shotgun” when riding in a car comes from the term “shotgun messenger”, a reference to the guard who sat next to a stagecoach driver, who used a shotgun to keep robbers away in the wild west.

Question: 45% of us agree that THIS has been the most stressful event in their life. What is it?

Apparently, they really took the line “Now, bring us some figgy pudding,” seriously. The makers of Spam have introduced Figgy Pudding — a festive twist on the original canned gelatinous pork product — just in time for the holidays. And the “limited-time purchase” is so popular, it has already sold out on Amazon, Walmart and the company’s website. Figgy pudding Spam adds “notes of cinnamon and nutmeg combined with fig and orange flavors,” to the original recipe. Hormel, the makers of Spam, has posted some recipes online for holiday skewers, a charcuterie board. . . and even pancakes containing the figgy pudding. Figgy pudding, a traditional British dish, is a steamed cake with raisins, currants, and brandy. The modern version does not include figs. Hormel has also created an animated video called “We Wish You a Figgy Christmas,” which includes the lyrics: “and a Spam-tastic New Year.” LINK: https://tinyurl.com/4xd69vje

2022 WORLD’S MOST EXPENSIVE CITIES TO LIVE IN:

According to this year’s Worldwide Cost of Living Index, released by the Economist Intelligence Unit…

1. New York, USA and Singapore (tie, NY has never topped the list before, while Singapore has topped the annual list several times)

Health nuts are going to feel stupid someday, lying in hospitals dying of nothing. - Redd Foxx

Rolls-Royce and easyJet have set a new aviation milestone with the world’s first run of a modern jet engine on green hydrogen fuel. The ground test was conducted on an early concept demonstrator using green hydrogen that was created by wind and tidal power. It marks a major step towards proving that hydrogen could be a zero-carbon aviation fuel of the future. The partnership was inspired by the UN initiative ‘Race to Zero’, encouraging companies to try and reach zero emissions by 2050. As of now, most renewable or green aviation fuels have been made through vegetable oil, or other biological fuels. Hydrogen, however, is considered to be the only way to fully-decarbonize the aviation industry, which accounts for about 3.6% of global greenhouse gas emissions.