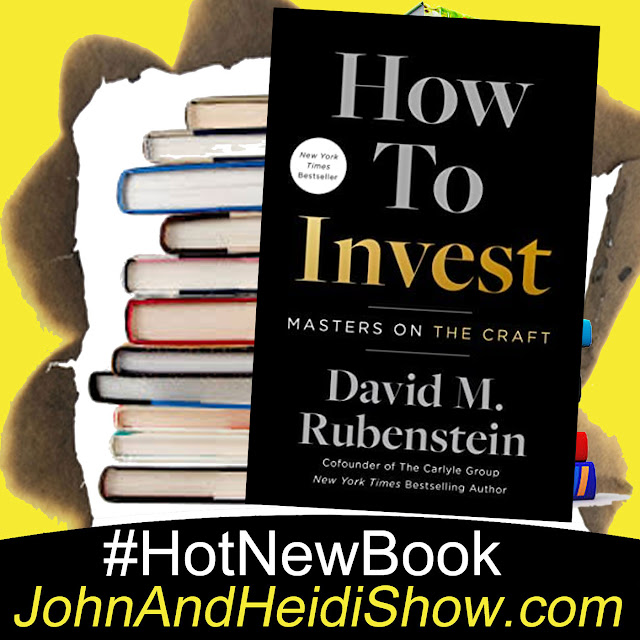 Today we visit with the bestselling author, David M. Rubenstein. His new book is out right now, it's called “How to Invest: Masters on the Craft”

So you’re heading out of your home for a few hours. Do you pat your dog on the head, give him a little kiss and tell him to be good, or try to sneak out, so he might not notice you’re gone? A new study from researchers in Italy, says that dogs have an easier time emotionally when we give them an affectionate, gentle petting before leaving. The researchers conducted experiments with 10 healthy dogs without unusual attachment issues. They found that when dogs had been petted, they exhibited a more relaxed demeanor during the separation, and their stress levels remained unchanged.

Bad news if you’re one of the millions who can’t fall asleep without the TV on. A study published in the Journal of the American Medical Association found that those who sleep with artificial lights (including the TV) are at increased risk of weight gain and obesity. The study, conducted on 44,000 adult women, found that those who sleep with lights on are also “more likely to have less sleep, take a longer time to fall asleep, wake up at night, and take naps.” Even those who sleep with a night light on had increased body weight (of roughly 11 pounds, or 5kg), and experienced a 10% or more increase in BMI.

“The X Factor” might get another chance with a new network. More than nine years after the American version of the hit reality competition series was canceled by Fox after just 3 seasons, it may be coming back the US television, with creator and judge Simon Cowell recently revealing that he is in talks with NBC to revive The X Factor. The deal is by no means done, but if it happens, it will likely fall under Cowell’s expanded deal with NBCUniversal.

Do you know anyone who is getting married in 2023? Well, if you’re invited to a bachelor party, make sure you show up: a survey says that 2 in 5 people think bachelor or bachelorette parties are more memorable than the wedding itself (42%). Now for the wholesome part: The poll of 2,000 adults in the US regarding the traditions involved with the “final night of freedom” reports that people think bachelor and bachelorette parties are more fun (58%) and memorable (44%), than raunchy (13%) or cheesy (12%). And a third of respondents are over going to gentlemen’s clubs (34%) – especially women (42% vs. 25% of men). Many are also ready to stop having explicit-themed items (29%) or visiting a casino (22%), calling these traditions “tacky.” The OnePoll survey found that while bachelor and bachelorette parties may invoke images of partying and chaos, 65% believe they should be an opportunity for the groom or bride to relax — and that the guests should cover all expenses for the party (55%). The best place for a wedding pre-party? An all-inclusive resort.

Your fingernails grow faster when you are cold.

Only 45% of the London Underground is actually underground.

People whose names start with ‘A’ have the longest life expectancy.

Medical errors are the 6th leading cause of death in the U.S.

Attics were invented in Attica.

Question: 18% of people admit they’ve done THIS purely to come across as more intelligent. What is it?

Answer: Displayed books in their home or office

Nick Cannon has words for anyone who thinks he’s had too many kids … “My body, My choice!” He appeared on CNN’s New Year’s Eve show, and co-host Andy Cohen asked him if he’d consider getting a vasectomy. Cannon’s response to that question was vague, but Cohen pressed the father of 12, saying: “Do you want to hit 20?” Cannon’s honest answer: “Clearly, I don’t have a plan. That should’ve been clear from the jump.” Cannon welcomed baby #12 last month.

GREATEST SINGERS OF ALL TIME:

When I was a boy I was told that anybody could become President. I’m beginning to believe it. - Clarence Darrow

Stranger Buys Kid A Grand Piano After Seeing Him On The Local News
https://www.sunnyskyz.com/good-news