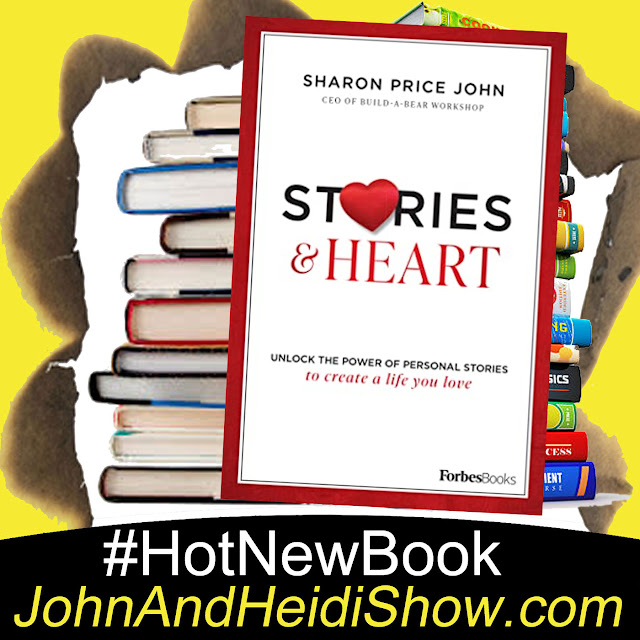 Today we visit with Sharon Price John about her new book “Stories and Heart” https://amzn.to/3ZNqzf6

Well, it’s official. Going to work makes you miserable. Wait. That’s not it. But working less makes you happier, according to science. A new study published in Health Economics Review, has shown you experience higher life satisfaction, the fewer hours you work. An analysis of 10 relevant studies by researcher Qinglong Shao also shows that working less affects your health positively – and of course, improved health equals greater life satisfaction. Shao feels people are happier if they work fewer hours for one main reason: They then have more time to spend with family, and for other commitments and responsibilities outside their working lives. She suggests that countries enact or strengthen regulations to limit hours worked, and thereby protect employees’ health.

Embattled comedian Andy Dick was arrested Friday morning in California, and charged with public intoxication and failing to register as a sex offender. Riverside County Sheriff’s Department said deputies responded regarding an “intoxicated subject” who was “possibly under the influence of narcotics”. They discovered Dick “displaying signs of being under the influence of alcohol” and arrested him without incident. They say that a routine records check revealed that Dick “was a registered sex offender who was not up-to-date on his registration.” In November, he was convicted of sexual battery for groping an Uber driver, and was ordered to register as a sex offender.

“Avatar: The Way of Water” is still drawing audiences box office. James Cameron’s latest remains #1 in its 5th weekend, with an estimated Martin Luther King Jr. weekend 4-day take of $35 million. That will push the sequel $568 million at the domestic box office by today, passing “The Dark Knight” and “The Lion King” to become the 13th-highest grossing movie of all-time in the US and Canada. In strong second place was “M3GAN”, with an estimated 4-day take of $21 million.

“Titanic” director James Cameron wasn’t kidding when he said he conducted a “scientific study” to debunk the theory that Kate Winslet and Leonardo DiCaprio could have both fit on a piece of floating debris at the end of his 1997 movie. In a new clip from an upcoming documentary, the filmmaker is on hand as stunt people re-enact the scene, proving once and for all that ‘Jack’ and ‘Rose’ could not both have survived the shipwreck. The experiment is featured in “Titanic: 25 Years Later With James Cameron”, premiering Feb. 5 on National Geographic. Another interesting tidbit: That piece of floating debris isn’t a door at all, as is commonly surmised. It’s a piece of wood paneling from a first-class cabin, according to the director.

We keep hearing about our favorite TV shows and movies being “rebooted”, how about our favorite tech devices? Well, wait no further, because the iconic Sony Walkman is back — as a hi-resolution streaming player. The Walkman cassette player was first released in 1979, selling over 500,000 units in its first year. It became a huge leap forward in portable music consumption, eventually selling over 400million units. The new Walkman is available in two models, and Sony says both offer “evolutionary sound” while allowing listeners to download music to the playing card-sized device or stream via Wi-Fi. You can use “your favorite streaming and music apps right on your Walkman or connect to a PC to access your music collection”. LINK: https://tinyurl.com/y2up7fsk

✓ No matter how cold it gets, gasoline will not freeze.

✓ Wal-Mart data shows that prior to a hurricane, people stock up the most on strawberry Pop-Tarts and beer.

✓ The inventor of the light bulb, Thomas Edison, was afraid of the dark.

Question: More than 80% of homeowners have this outside of their houses. Can you name it?

First, it was disposable cameras. Then it was low-rise jeans. Now, Gen-Z’s latest “vintage” obsession is the flip phone – that mid-90s-era phone that has suddenly become oh so popular with millennials. these smaller, lightweight devices – some available for as little as $20, Are showing up in TikTok videos of young people unboxing them, bedazzling their cases just like earlier generations did, and filming tutorials on how to use the low-quality camera. One 18-year-old says she and her friends make it a habit to leave their smartphones behind when they go out for the evening, contacting each other only through their flip phones throughout the night, and take pictures using them, despite the primitive camera. She also points out that their devices are a big conversation starter.

So, it’s the day of the big game…it’s “do or die” for your team…do you put on your lucky jersey? Your lucky undershorts? Do you sit in a certain “lucky” seat at home, and eat that special snack that you believe helps your team from afar? Well, if so, you’re not alone. Four in 10 sports fans admit they’re superstitious when it comes to critical games. In a survey of 2,000 who watch sports, 25% said they carry out unusual rituals ahead of a game to help improve their team’s luck. Of these, when watching at home, 23% must sit on the same part of the couch for any game, while 24% will kiss the logo of their beloved team. And 22% say they sometimes refuse to watch a game with certain people who they feel are unlucky. And when they feel the significance of the game is out of the control of their influence, 18% of sports fans say they don’t hesitate to call on a higher power – by praying.

The top rituals ahead of a big game are:

1. Kissing the badge or emblem of your team

2. Refusing to wash for the duration of the tournament

3. Sitting in the same ‘lucky’ spot to watch from home

5. Sitting in the same ‘lucky’ seat when watching from the venue

6. Refusing to wash your ‘lucky’ item of clothing for the duration of the tournament

7. Putting on a specific sports shirt or jersey

8. Putting on a lucky pair of socks

These drapes are awful. One of us will have to go. – Oscar Wilde