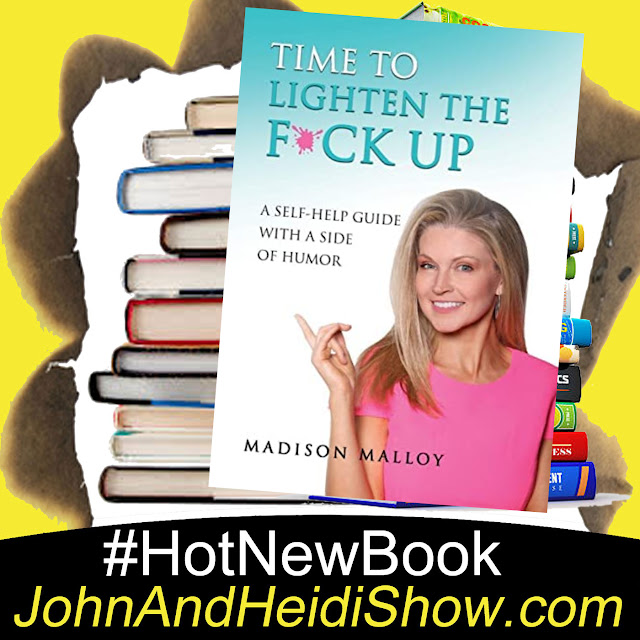 Today we visit with Madison Malloy about her new book “TIME TO LIGHTEN THE F*CK UP: A Self-Help Guide With A Side Of Humor” https://amzn.to/3XkkUvp

A Harvard study showed that being lonely has the same risk of heart disease as smoking. The study explains "loneliness, social isolation, or both were associated with a 29% increased risk of heart attack and 32% greater risk of stroke."

Before becoming a movie classic, Back to the Future was rejected over 40 times, with one of the most notable rejections coming from Disney. Disney believed the movie was too risqué for their family-oriented audiences, specifically the part about Marty meeting his mom in 1955. Columbia Pictures had just produced Animal House and Fast Times at Ridgemont High, and their executives said it was too tame for their audiences and passed on it, too. Universal Studios eventually bought the rights and it became the highest-grossing film of 1985...and was nominated for several Academy Awards.

Angela Bassett continues to be honored for her work in the industry. The 64-year-old will receive the 2023 Distinguished Artisan Award from the Make-up Artists & Hair Stylists Guild on Feb. 11. The award highlights her bold collaborations with over 706 makeup and hair teams to create a career’s worth of memorable movie looks. That’s after winning both a Golden Globe last Tuesday and a Critics Choice Award on Sunday for best supporting actress in a motion picture, both for her role as ‘Queen Ramonda’ in “Black Panther: Wakanda Forever”.

Danai Gurira is teasing that her Marvel character ‘Okoye’ will be getting a spinoff Disney+ show. The “Black Panther: Wakanda Forever” actress stopped by “The Late Show with Stephen Colbert”, where she was asked if she could confirm reports of a spinoff show featuring her popular character. Hesitant at first, Gurira eventually told Colbert, “I have been told that I can gently allude to this possibility. So, I am gently alluding, just gently.” Disney hasn’t confirmed the show, but it was reported that Gurira would reprise her Black Panther role in a spinoff series for Disney+ by The Hollywood Reporter in 2021.

With the revival of the “Night Court” series recently premiering, Bryan Cranston hopes you’re in the mood for another classic sitcom revival. Cranston has confirmed that discussions are underway about reuniting the cast of “Malcolm in the Middle”. He told E! News that there is “some talk about the possibility of doing like a reunion movie”. Cranston, who played hapless dad ‘Hal’ on the Fox sitcom, feels that the cast of the show was so great, it “would be fantastic to explore what happened to this family 20 years later.”

(Thanks to those who responded to a question posted in Reddit…)

➢ “When you buy pizza from a place that only sells it by the slice, you’re pretty much having a pizza party with a bunch of strangers that day.”

➢ “Charcuterie is just a Lunchable that went to Harvard.”

➢ “A fish stick and a hot dog served together on the same plate is basically surf ‘n turf.”

➢ “Macaroni and cheese with sliced hot dogs is carbonara if you’re super vague about the details.”

➢ “A corn dog is really just a cheaper version of beef Wellington.”

➢ “The flavor of water is its temperature.”

➢ “Gazpacho is a vegetable smoothie.”

➢ “A chicken nugget is a meatball, and nothing can change that fact.”

➢ “Strawberry Cheesecake is essentially a plate of fruit, cheese, and eggs, perfectly acceptable for breakfast.”

➢ “A bowl of cereal is just breakfast soup.”

➢ “Corn is really just a speedometer that measures how fast your digestive system is working.”

✓ The can opener was invented 48 years after the can.

✓ Since 1770, there has been a global flu pandemic about once every 20 years.

✓ The word ‘facetiously’ contains all 5 vowels and the letter “y”, in alphabetical order.

✓ On average, 3 people die each year from using their tongue to check if a battery works.

✓ People who often feel guilty tend to be the hardest workers.

Question: A survey found that couples argue about THIS the most in the first 10 years of marriage. What is it?

Answer: What to name the baby

You’re familiar with the acronym F.O.M.O. (Fear Of Missing Out). Well, move over, FOMO, because F.O.S.Y. is here. What’s FOSY? The Fear Of Saying Yes. And it does hit a mark. Many people struggle with saying “no” to friends, family, and colleagues when asked to do something. In fact, according to a new survey, more than half of adults regularly deal with FOSY. Psychologist Emma Kenny says FOSY is linked to the emotions we experience when faced with opportunities that push us outside our comfort zone. She explains that when we feel it might be a situation where we’ll be judged or not do well at something, “our instinctive, knee-jerk reaction is to say ‘no.’” A poll found the average adult says no to something they actually want to do every 10 days. This fear of saying yes means 35% think they have missed out on making new friends, while 33% have avoided going out on a date. And 32% say it has held them back from trying a new hobby.

MOVIE LINES THAT AREN’T “CLASSICS,” BUT PEOPLE STILL QUOTE THEM ALL THE TIME:

• “How about NO.” – Austin Powers in Goldmember

• “If I’m not back in 5 minutes…just wait longer!” – Ace Ventura: Pet Detective

The two most common elements in the universe are hydrogen and stupidity. - Harlan Ellison