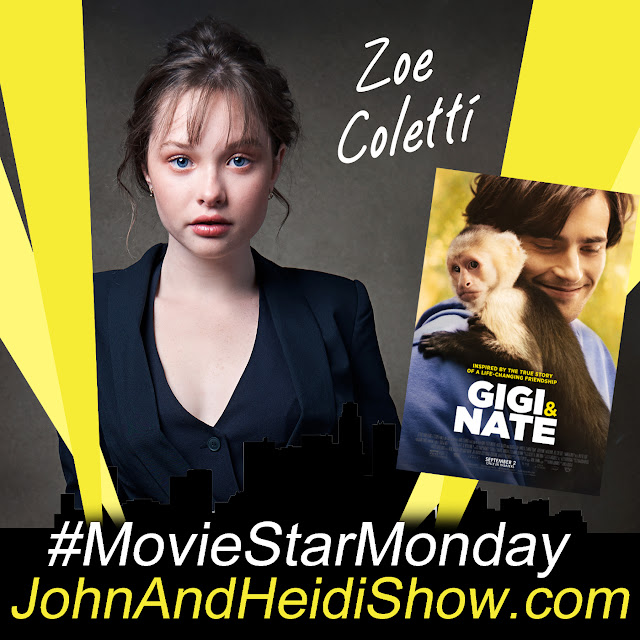 This #MovieStarMonday we visit with Zoe Coletti (Walking Dead, Annie)

We will visit about her new film from last year. Gigi and Nate

Could it be? Have scientists finally come up with a cure for old age? British researchers say they’ll be testing a new drug this year, which could increase life expectancy to about 120 years. The treatment, which they say could significantly increase a person’s healthy lifespan and, in turn, their longevity, by boosting the immune system, was made possible after they found a way to slow down – and potentially even prevent – the natural ageing of T cells, a key part of our immune defences. The researchers say it’ll be a number of years before any effective longevity drug is available, and there is no guarantee of success, as the project is still at an early stage.

A guest essay for the New York Times over the weekend insisted that being short is “better” for the future of the planet. Author Mara Altman wrote that not only do shorter people tend to live longer, they’re also crucial in conserving food and resources on our dying planet (because they eat less), and “they may also be best suited for long-term survival (and not just because more of us will be able to jam into spaceships when we are forced off this planet we wrecked).” Altman even suggested people begin purposefully mating with shorter people in order to produce a shorter society. Twitter users didn’t disappoint in their responses, with one writing: “Someone short and single is writing op-eds for The New York Times.”

“Wednesday” has taken over the Netflix crown, beating out the platform’s long-time flagship original series, “Stranger Things,” to be the most in-demand show available on the platform at the start of December, according to new data, which takes into account consumer research, streaming, downloads and social media, among other engagement. The new “Addams Family” spinoff had 66 times the average series demand for the first half of December and looks to be one of the strongest premieres of the year, even outpacing global demand for the premiere of “Squid Game” in 2021.

A new favorite to take on the role of ‘James Bond’ has emerged, as “Bullet Train” star Aaron Taylor-Johnson reportedly performed a screen-test and met with franchise producer Barbara Broccoli about taking on the mantle of 007. A report says the meeting “went well.” Broccoli has been on record as wanting a younger star who is British, and doesn’t yet carry a megastar pedigree. 32-year-old Taylor-Johnson has also appeared in the movies “Avengers: Age of Ultron”, “Godzilla” and the “Kick-Ass” franchise.

➠ Police in Hollywood detained a “person of interest” in a brush fire arson case.

➠ About three-quarters of the people who made new year’s resolutions have already broken them, says a report.

Moons can have moons, and they are called “moonmoons.”

Milk carton spouts didn’t appear until the 1960s. Before then, they had to be cut open.

The word “good-bye” is a contraction of “God be with ye.”

The Greek name for the mosquito is “anopheles,” which means “good for nothing.”

Flies spend 30% of their time vomiting.

Question: A study shows we throw away 92% of THESE without ever using them. What are they?

It’s a new year, but in Florida, things never change. Our bozo couple had a problem. They were in the process of burglarizing a home when they realized they had hit the jackpot. In fact, they had so much stuff, there was just no way they could move it out of the house by themselves. So, what to do? Call 911 for help, of course. Yep, she called 911 to ask for assistance, and while she was asking she also said they needed a ride to the airport for a weekend getaway they had planned in New York. When the cops arrived, they were still in the house organizing their stuff. They got a ride directly to jail.

✪ M3gan (Jan 6): A roboticist (Allison Williams) programs a robot child to help her orphaned niece cope with a tragedy.

✪ Ant-Man and the Wasp: Quantumania (Feb. 17): Paul Rudd’s Scott Lang and his Ant-Family are trapped inside the Quantum Realm, and forced to face Kang the Conqueror.

'We Fed Them, Had Coffees Going': McDonald's Workers Shelter People From Blizzard https://www.sunnyskyz.com/good-news