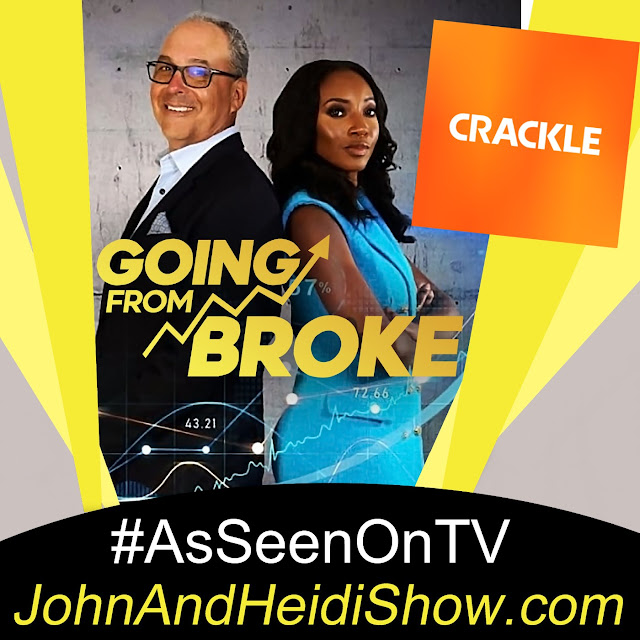 Today we visit with Dan Rosensweig, C.E.O. of Chegg, the Student Learning Platform. We will visit with him about his Webby Award-Winning Series “Going From Broke”, which takes you from financial struggles to financial freedom! From Chicken Soup for the Soul Entertainment comes season 3 of the Series that Helps People Navigate and Overcome Their Crippling Debt.

“Going From Broke” is now streaming free on Crackle. crackle.com

No matter where they live in the world, no matter what their cultural or family influences: Women are better at empathizing with other people than men, according to a study from the University of Cambridge. Researchers used empathy test results from 306,000 people across 57 countries, and found that in 36 countries, women scored significantly higher in their cognitive empathy scores than men did. In 21 of the countries, women’s and men’s scores were similar. There wasn’t a single country in which men scored better, on average, than women. The results held across 8 languages and were consistent across all ages, between 16 and 70 years old.

Monty Python’s famous “silly walk”, popularized over 50 years ago by the British comedy troupe, is an ideal exercise for burning calories, according to researchers at Arizona State University. Using John Cleese’s walk as the focus of its study, the research team, in a bit of year-end fun, concluded in its nevertheless exhaustive research that adults could reap the benefits of having done the equivalent of “75 minutes of vigorous-intensity physical activity per week by walking in ‘Teabag style’ (demonstrated in the sketch), rather than their usual style, for about 11 minutes per day.” LINK: https://youtu.be/FhRLg0IDyhM

“Black Adam 2” is officially on the back burner. Dwayne Johnson has taken to Twitter to share a statement confirming that a sequel to his recent superhero blockbuster won’t be moving forward. It had previously been reported that the project was dead amid a change in direction for the DC film universe, headed up by director James Gunn and producer Peter Safran. Johnson wrote: “James Gunn and I connected, and Black Adam will not be in their first chapter of storytelling. However, DC and Steven Bucks have agreed to continue exploring the most valiance (‘heroic’) ways Black Adam can be utilized in future DC multiverse chapters.” He added, “James and I have known each other for years and have always rooted for each other to success. It’s no different now, and I will always root for DC (and Marvel) to win and WIN BIG.” DC has also recently scrapped Patty Jenkins’ third ‘Wonder Woman’ film, along with Henry Cavill’s return as ‘Superman’. LINK: https://tinyurl.com/2bky25br

Prince Harry looks like he’s ready to reconcile with his family. But in a trailer for his upcoming interview with ITV 1, the Duke of Sussex says his efforts to mend his relationships with King Charles and Prince William seem fruitless. Harry says: “They’ve shown absolutely no willingness to reconcile. I would like to get my father back. I would like to have my brother back.” The royal indicates that he’s looking to have a “family” instead of an “institution,” though The Firm feels differently about him and his wife, Meghan Markle, preferring to keep them “as the villains”. The interview airs this Sunday.

More couples separate or divorce in January than any other month of the year.

You do not need a driver’s license to be a NASCAR driver.

The use of seat belts in F1 racing wasn’t mandatory until 1971.

Answer: Who they kissed to ring in the New Year

Elon Musk sided with Greta Thunberg in her feud with right-wing internet personality Andrew Tate, who was recently arrested in Romania on suspicion of rape, human trafficking and organized crime. Before being taken into custody on Thursday, Tate tweeted a video response to Thunberg, featuring a “not recycled” pizza box from a local chain. Upon his arrest, Thunberg responded by tweeting “This is what happens when you don’t recycle your pizza boxes”. Musk posted on Sunday: “Sometimes it’s just better to make pizza at home.”

• Exercise regularly . . . for the first two weeks of January

• Wake up by noon every day

• Get out of the house at least twice

• Make time to work on my procrastination

• Think about going to the gym 3-5 times per week

• Not to change a thing. Because whenever someone dies, people always say “Oh man, and just when he was starting to get his life together…”

I would like to die on Mars. Just not on impact. – Elon Musk