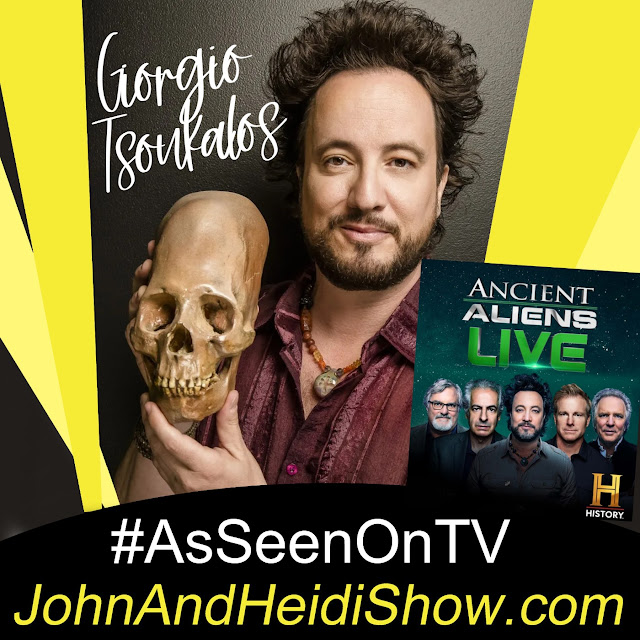 Today we visit with Giorgio Tsoukalos. He has become synonymous with the History Channel TV show Ancient Aliens. He and others from the crew have taken the show on the road with Ancient Aliens LIVE. https://www.ancientalienslivetour.com/

For the 6th year in a row, the Mediterranean diet — a way of eating focused on whole grains, fruits, vegetables, lean protein and healthy fat — is the best overall diet, according to US News & World Report’s annual ranking. The DASH diet, which aims to lower blood pressure, and the flexitarian diet, a modified vegetarian pattern of eating, tied for second place. The 5 best overall diets are:

Stress speeds up vision loss, according to new research. A team at University of California, Irvine School of Medicine found that stress forces retinal tissue to go through changes similar to those that occur from natural aging. The mass aging and death of retinal ganglion cells in the eye are a major risk factor for glaucoma.

By now, you’ve heard about 100 “leaked stories” from Prince Harry’s new memoir “Spare”, which is officially out Tuesday. But have you heard THIS? Apparently, Prince William is “burning” with anger over Harry’s claims, but would “never retaliate”, according to close friends. The Sunday Times reports that William’s confidante described him as a “sitting duck” amid the heaping revelations made by the Duke of Sussex in his book, which is dominated by his rivalry with his brother and the death of their mother, Princess Diana in 1997. The friend said that the Prince of Wales has kept quiet “for the good of his family and the country.”

Prince Harry says his brother Prince William knocked him to the floor during a 2019 argument over Harry’s wife Meghan in his much-awaited memoir, which goes on sale Monday. A leaked copy reveals the brawl with William took place at Harry’s London home. He writes that William had called Meghan “difficult”, “rude” and “abrasive”, and, quote: “He grabbed me by the collar, ripping my necklace, and he knocked me to the floor.” Harry says he eventually got to his feet and told his brother to “get out”. William later apologized.

The 2023 edition of the Consumer Electronics Show, “The Most Influential Tech Event in the World”, which wrapped up in Las Vegas this week. Here are some of this year’s biggest reveals: (part 1)

⇒ The TV that puts all others to shame: Last year, LG introduced the world’s largest OLED TV: Its 97-inch model. In 2023, it’s gone wireless. That means the world’s largest screen with the best picture that technology allows is now free of that ugly jumble of cords.

⇒ Pokemon, but make it birds: Bird Buddy has a smart bird feeder that takes snapshots of feathered friends as they fly in for treats. Its AI tech can recognize more than 1,000 species, allowing users to share through an app what kind of birds they’re feeding.

⇒ Electric skates: Journalists have been zipping around the exhibit hall on remote-controlled, electric inline skates from startup AtmosGear. The battery lasts for 20 miles (32km), and its developer hopes people will see them as a viable way to commute, like electric bikes or scooters.

⇒ Digital temporary tattoos: A handheld device by Prinker allows you to quickly and easily apply temporary tattoos. After picking one, you just wave the device over wherever you want it applied. Use their library of thousands of designs or make your own using an app.

Overpaying for something activates the part of the brain associated with guilt and pain.

Two-thirds of the world’s lawyers live in the United States.

Only 3 countries in the world are officially not allowed to sell Coca-Cola: North Korea, Cuba and now, Russia.

Question: The average person has 725 of THESE. What ARE they?

Answer: Contacts in their phone

Scott Stallings arrived at his condo to find a package holding the most prestigious letter in golf. He’d been invited to play in the Masters tournament in April. The only problem? This Scott Stallings is a realtor in Atlanta, not the world’s 54th ranked golfer who is also a 3-time PGA Tour winner. He decided to have fun with it, and immediately DM’d the pro golfer of the same name on Instagram, writing: “I’m 100% sure this is NOT for me. I play, but wow! No where near your level.” The pro-golfer Stallings – who is in Hawaii – tweeted that he “Literally had been checking the mailbox 5 times a day and then I got this random DM yesterday”. The realtor later posted: “Trust me! I was thinking of showing up with my clubs and the invite.” LINK: https://tinyurl.com/ye26sw2p

✪ Fast X (May 19): The 10th installment of the “Fast & Furious” franchise features another high-octane adventure. Joining Vin Diesel and the usuals are newbs Jason Momoa and Brie Larson.

A woman is like a tea bag – you can’t tell how strong she is until you put her in hot water. - Eleanor Roosevelt

On Dec. 31, Gary McKee completed his goal of running a marathon on every day of 2022 — and he has more than 20 pairs of worn-out sneakers to prove it. The 53-year-old father of 3 from England ran the 26.2-mile route each day . . . before going to work. What’s more, at the same time, he was raising money for 2 charities: a cancer support organization and a hospice center, bringing in US $1.2 million from supporters. On his final run, a crowd cheered him on, and fireworks went off when he was finished. McKee ended up running more than 9,500 miles total (equal to 3 times across the US), and in completing the “unbelievable challenge,” a rep from the hospice center said he also “sprinkled magic on the local community and brought people together.”