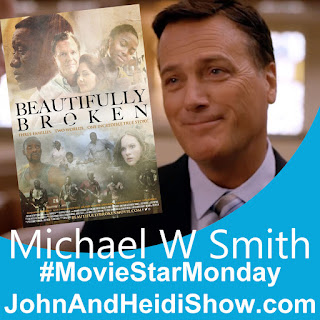 It's a #MovieStarMonday with Grammy & Dove Award Winner Michael W. Smith. He is in a new movie called Beautifully Broken. We also have Randy Hartley, whose family the movie is really about. - http://beautifullybrokenmovie.com

"Success is a lousy teacher. It seduces smart people into thinking they can't lose." --Bill Gates


A growing number of TV shows have inspired their own line of beers aimed at fans. (https://goo.gl/77q79W)


A Missouri nun smuggled two pounds of cocaine into Australia using her high heels, but claims she was duped into the act by a man she met online. 51-year-old Denise Marie Woodrum was caught arriving into Sydney Airport last August while making her way through customs — when officers discovered the drugs stuffed into the heels of her shoes. But her lawyer, Rebecca Neil, told District Court Judge Penelope Wass last week that the items were meant for a mystery man Woodrum had met online named Hendrik Cornelius. Neil said, “She was groomed to provide a financial gain for this person, Hendrik Cornelius, whatever person or persons it was behind this identity. She went on this trip thinking she was bringing artifacts for him.” (https://goo.gl/z9EY2E)
According to a new study, elephants rarely get cancer.
(https://goo.gl/dnpA42)

A study by Willis Towers Watson found that U.S. workers are about to see nationwide pay raises as the economic recovery spurs companies to increase salaries. (https://goo.gl/gVQKrC)

A Pennsylvania family is suing the makers of Dum Dum Lollipops after their son choked on one.
(https://goo.gl/BzDtDA)

A Texas man bitten by a shark has now contracted flesh-eating bacteria. (https://goo.gl/WYBNE3)

R. Kelly is being accused of trashing two rental homes in Georgia and the owner is demanding $200,000 in damages.
(https://goo.gl/dQfH2t)

All swans in England belong to the queen.


Fudgel (FUH-jul)
Verb:
-Pretending to work when you’re not actually doing anything at all.

Origin: I am personally unable to track down the etymology of this word, so we shall have to take the word of author Mark Forsyth, (The Horologicon, The Etymologicon & The Elements of Eloquence) who says it’s from the 18th century; I cannot find anything beyond that.

Used in a sentence:
“I need you to stop fudgeling and get those TPS reports on my desk by two o’clock!”

An Arkansas woman who posed as a California deputy to help her boyfriend escape a county jail was arrested. 30-year-old Maxine Feldstein identified herself at the Washington County Jail as deputy “L. Kershaw” with the Ventura County, California Sheriff’s Office in order to free her boyfriend, Nicholas Lowe.
Feldstein provided a forged document requesting the agency to release its hold on Lowe. Lowe was being held at the Washington County Detention Center for alleged criminal impersonation out of Ventura, California. Jail officials realized they’d been snookered two days later when a real Ventura County Sheriff’s deputy called the facility to say he was on his way to pick up Lowe. The couple was arrested later that day. Feldstein was facing charges of forgery, accomplice to third-degree escape, and criminal impersonation and Lowe was facing a second-degree escape charge.
(https://goo.gl/Yo68Ee)

MOMENT OF DUH:By LearnWithoutLoans.com (Find Funding For College)
A New York City taxi driver was arrested after a series of events captured on film showed her brawling in the middle of Manhattan before crashing the cab into a couple of vehicles on Thursday. 25-year-old Alyssa Jenna Mallett of Brooklyn was arrested at the scene and charged with “reckless endangerment, criminal mischief, and assault.” Mallett was driving a yellow taxi in Midtown Manhattan when she became enraged after a Nissan SUV possibly cut off her off. A video captured Mallett going after a man and a woman as bystanders attempted to break up the fight. After the fight, Mallett was seen getting into the taxi and hitting a UPS truck before striking the couple’s SUV with the cab. She then backed into a parked car. The couple said an 11-year-old girl and a 2-week-old infant were in the SUV at the time of the incident. TLC suspended Mallett’s license following Thursday’s arrest. (https://goo.gl/iuzD3x)