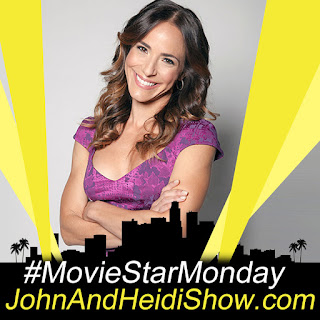 It's a #MovieStarMonday with Ereka Vetrini. She got her start on The 1st season of The Apprentice on NBC. She went on to the Tony Danza Show, several film and now hosts Access Health on Lifetime. We'll chat about her career and some BACK TO SCHOOL TIPS!

"Know the true value of time; snatch, seize, and enjoy every moment of it." -- Lord Chesterfield


Police say a man was injured after his gun went off while he was fleeing from officers on Saturday in Delaware County. According to the Upland Borough Police Department, an officer pulled over a white Lincoln Sedan for an expired inspection. After approaching the car, the officer smelled marijuana, police say, and told both people inside the car to provide identification and step out of the vehicle. Police say that's when one of the men, 20-year-old Keon Williams, fled the scene on foot. Officers were in pursuit when they say Williams pulled a semi-automatic firearm from his waistband, causing it to fire. The bullet hit Williams in his lower body. Police took Williams into custody and then sent him to the hospital for treatment of non-life-threatening injuries. Investigators say the gun Williams was carrying had been reported stolen. Williams was also in possession of drugs, drug paraphernalia, and more than $2,300 in cash. (https://goo.gl/Tf5MGu)
A Social Life Survey found that the majority of today’s teenagers would rather get a text than talk on the phone.
(https://goo.gl/8518Zh)
Diners at a Mexican restaurant in Los Angeles were shocked when a woman fell through the ceiling and landed on the floor. The place is called the Sabroso Mexican Grill. Luckily, everyone was able to get out of the way. (https://goo.gl/gbJH9i)

The “Miss Subways Beauty Pageant” is returning to New York City for the first time since 1976. (https://goo.gl/u8Spdr)

Vladimir Putin cooked pancakes for China’s President Xi Jinping and the two did vodka shots at a financial summit in Russia. (https://goo.gl/8f3J45)

In 1518, a “dancing plague” took over the town of Strasbourg, France.

Absquatulate   (ab-SKWAH-chu-layt)
Verb:
-To leave abruptly.
-To abscond or run off.
-To get out of Dodge.
-Bug out.

From mid 19th century: a blend of the words abscond, squattle (depart), and perambulate...meant to simulate a Latin form.

Used in a sentence:
"As the office chronometer strikes 5:00 each Friday, Mortimer does not hesitate to absquatulate!"