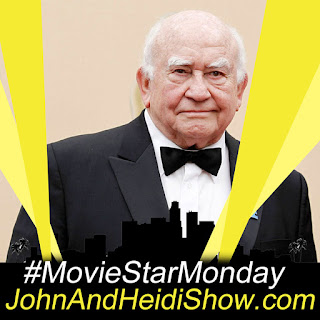 It's a #MovieStarMonday with Ed Asner. He's a living legend with a pile of awards for his work on the Mary Tyler Moore Show & Lou Grant on TV. Plus many amazing movies like Elf & UP! He also recently appeared in Cobra Kai as Johnny's step-father. Super excited to have him as our guest for #MovieStarMonday!
#MovieStarMonday #JohnAndHeidiShow #EdAsner #Up #Elf #LouGrant #CobraKai

"The best protection any woman can have... is courage." --Elizabeth Cady Stanton


A trip to the ice cream shop proved to be quite eventful for one Florida man Monday evening. According to a police report from the Collier County Sheriff’s Office, an individual, later identified as Josh Verrot, apparently had a hankering for some frozen treats and pulled into the parking lot outside Royal Scoop in Bonita Springs. Witnesses say that the driver was driving recklessly in the lot before finding a parking spot. The report says that his car, a 2003 silver Nissan Maxima, had “extensive damage, including a shredded front driver’s side tire” with “rubber flying off the rims.” Staffers at the store called cops over the damaged car situation, plus they noted the man seemed intoxicated when he entered with no shirt on. When deputies arrived, Verrot fled the store on foot, but officers were able to catch up with him in the woods, where the 23-year-old was sitting and eating his ice cream. On the way to the jail, Verrot began “speaking profanely” and continued to move around. On two separate occasions, the patrol car had to pull over so that deputies could warn him to calm down or he would be “sprayed.” He was charged with suspicion of DUI, battery, and fraud (as he gave his brother’s name at the time of his arrest). (https://goo.gl/qNtEYV)


A woman in Panama fell to her death from the 27th floor of a high-rise after she lost her balance while taking a selfie. The incident is still under investigation, but police are focusing on the theory that a gust of wind may have knocked her off balance. https://metro.co.uk/2018/10/15/woman-who-fell-to-death-taking-selfie-on-27th-floor-balcony-pictured-8039159/


(an oldie but a goodie... this happened in 2003)
An 80-year-old man in India, whose relatives thought he was dead, came “back to life” after being doused with cold water as part of the funeral preparations. The man was thought to have died of old age after his sister-in-law tried to wake him up for supper. http://www.terradaily.com/2003/031012074819.uknl52yb.html

Sears has filed for bankruptcy.

After years of blurry vision, a 102-year-old woman in China said she finally decided to undergo eye surgery because it was affecting her video gaming. But it’s not Fortnite, Call of Duty or even Angry Birds she’s playing. She’s been a hardcore fan of Solitaire since 2002 but was having trouble playing because of cataracts. Now that her eyesight’s better the 102-year-old has been told she can play her favorite video game up to 30 minutes at a time.

A study says swearing at work can fight off stress. The study showed bad language serves the needs of people for developing and maintaining solidarity, and as a mechanism to cope with stress.

Mother's Day was quite literally invented to be anti-commercialism.

Salubrious (sah-LOO-bree-uhs)
Adjective:
-Favorable to or promoting health or well-being.

USED IN A SENTENCE:
“Living a salubrious lifestyle is not always so easy with sedentary office jobs and tantalizingly unctuous comestibles readily available."

In an apparent bid to destroy evidence, a female drug suspect chewed and swallowed a glass crack pipe, according to Florida cops who arrested the woman on narcotics possession and tampering charges. During a police investigation late Friday evening, a Largo Police Department officer asked 52-year-old Dariel Hutton for permission to look through her purse. Hutton, a criminal complaint notes, replied that she “only wanted another officer to look through it.” Hutton then began “rummaging” through her bag, which allowed a cop to spot “a small glass pipe” with Brillo and “burnt residue” inside. The officer then sought to grab Hutton’s wrists so that he could handcuff her. The officer reported, “While I was doing this, she placed the pipe in her mouth and refused to open it.” Hutton, seen above, then began “chewing and attempting to swallow” the crack pipe in the face of Drumm’s demands to spit out the drug paraphernalia. Hutton was booked into the county jail for tampering with physical evidence, a felony, for consuming the crack pipe. She was also charged with resisting arrest, a misdemeanor. (https://goo.gl/iExp3N)

Walt Disney World security stopped a Zephyrhills man from accidentally bringing a gun into the theme park earlier this month. Marvin Shika said he forgot he left his black 9 mm handgun inside his backpack when security found it at the bag check at the Disney Ticket and Transportation Center. He had arrived at about 12:30 p.m., Oct. 5th with a stroller and his two children. The sheriff’s office took the gun and also confiscated his black holster, two magazines, and sixteen 9mm bullets as evidence. The 33-year-old, who told the Sentinel he is a fully disabled Marine Corps veteran, did not have a state concealed weapon permit. The sheriff’s office decided not to arrest Shika because he did not have a felony record and his young children needed someone to watch them. The report also noted that Shika had transported the gun in his car in a legal way so it was not “readily accessible” to his children. Disney issued Shika a trespass warning, and the Department of Children and Families was also notified. He hopes he can be allowed back at Disney parks since he is a Disney annual passholder who often took his children there, he wrote. (https://goo.gl/V9WLQw)