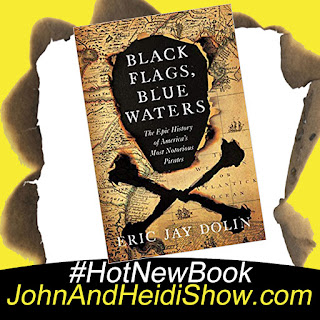 WE'RE ALSO GIVING AWAY A FEW COPIES FOR THIS #WinningWednesday!
Register to win at JohnAndHeidiShow.com

"The great thing in this world is not so much where you stand, as in what direction you are moving." --Oliver Wendell Holmes

Police say a Salem, Massachusetts man hit another man over the head with a cauldron near a local witchcraft store. Salem police officers were on patrol around 11:30 p.m. Saturday when the victim, bleeding from the head, ran up to them and said he was attacked by another man. Authorities say the two men had been inside a cottage behind a store that sells witchcraft related items, like decorative cauldrons and candle containers. Police say they found 35-year-old Cory Nelson inside the cottage stumbling around and smelling of alcohol. Nelson was arrested and pleaded not guilty to a charge of assault and battery with a dangerous weapon during his arraignment Monday. The victim suffered a cut to his head, but refused medical attention at the scene. (https://goo.gl/jyL34X)
SCOOP OF THE DAY:Brought to you by FreshPatch.com (use promo code RADIO to save 10%)
The 10 Best Halloween Candies
10. Hershey Bar
We’re again combining candies here, because there just isn’t that much difference between the original Hershey Bar and the Cookies ‘n’ Cream version. Or maybe there is for your palate. In any case, Hershey bars barely missed the worst list, yet got a few mentions on the best, including two mentions in the 24/7 Wall Street list. Which, since it was based on sales, is pretty good reason to include Hershey Bar on the best list, in our eyes.


9. Skittles
If you’re not eating the entire fun size bag in one mouthful, you’re doing it wrong. None of us here ever minded getting Skittles in our Halloween bags. They’re tasty enough. But they’re nothing special, and if you eat too many your mouth starts to feel all lumpy.


8. Sour Patch Kids
We’re shocked these didn’t rank higher, given their chewiness and sweetness. But after high marks on both the BuzzFeed and Business Insider lists, Sour Patch Kids made zero additional appearances. It’s probably because they’re not that common treats. I don’t know about you, but I haven’t seen many of the mini bags in grocery stores.


7. Butterfinger
The classic Butterfinger appeared on a number of lists, usually in the second half of the top 10. We’re not going to argue. It’s a personal favorite of mine, but it’s easy to see why it would turn off some candy fans. Still, you’re not going to complain when one gets dropped in your bag, are you?


6. Nerds
I was kinda surprised to see this on the list. The Nerds boxes you get on Halloween are typically tiny. As with Skittles, they’re pointless unless you down the whole thing in one mouthful. But maybe there’s something to that.


5. M&Ms
One list had pretzel M&Ms, which is oddly specific. They weren’t around when I trick-or-treated (it was plain and peanut back then), so I don’t even know that people hand out the fun sized bags of them. In any case, M&Ms are great. You know our opinions about them.


4. Kit Kat
On the surface the Kit Kat is pretty plain. It’s just chocolate and wafer. Yet it works so so well. And it works very well on Halloween, since you’re getting essential half of a full-sized bar. That’s way more than you can say for most of the fun sized versions of our favorite Halloween candies.


3. Twix
If I’m getting a full-sized candy bar on Halloween, make it a Twix, please. There’s just something about them that makes them irresistible. On Halloween you can count on three versions: the aforementioned full-sized version, the one-stick half-sized version, and the fun sized version. We hope you and your kids don’t get the fun-sized version, given the alternatives.


2. Snickers
There is no surprise here. I always preferred Milky Way, but people prefer more heartiness in a candy bar, apparently. Again, it would be so easy for people to go out of their ways and get full-sized versions. They’re not that big. But the fun-sized version is so small, so sad.


1. Reese’s Peanut Butter Cups
This was the blowout of the century. Of the seven lists we ranked, Reese’s Peanut Butter Cups ranked #1 on six of them, and ranked #3 on the other. And that list had six candies that didn’t appear on any of the other six lists, so yeah, this was just a candy massacre. Do we have to extol the virtues of the Peanut Butter Cup? My siblings and I used to separate them out and hide them, lest they get stolen. Many a tear was shed when someone picked a poor hiding spot.
https://www.candystore.com/blog/holidays/halloween/definitive-ranking-best-worst-halloween-candies/


The Centers for Disease Control is asking people not to dress up their chickens for Halloween.

A survey of parents reveals 83% check their children’s trick-or-treat candy before allowing them to eat it.

T-shirts were originally marketed to unmarried men who didn't know how to sew buttons back on collared shirts by themselves.

Galumph (guh-LUHMF)
Verb:
-To move along in a heavy and clumsy manner.

Galumph is a 19th-century invention from the mind of Lewis Carroll and is perhaps a blend of gallop and triumphant.

Used in a sentence:
“Rick immediately regretted his poor choice in zombie armor, as it caused him to galumph just as slowly as the zombies from which it was intended to protect.”

WEIRD NEWS:
Brought to you by FreshPatch.com (use promo code RADIO to save 10%)
A rickety house fenced off from the public on Highway 55 in Estancia, New Mexico has a haunting reputation. "It's been abandoned now for probably 20 years," Estancia Board of Trustees member and former Estancia Mayor Morrow Hall said. Many locals say the spooky theories behind the now doorless home attract people from across the state to snap a picture with hopes of spotting something eerie. "If you drive by, sometimes you can see ghosts standing in the window," Raul Zubia of Estancia said. Neighbors say they're concerned about trespassers at the abandoned home, adding they often have to "chase people out." "It's kind of a ghost house," Michelle Jones of Estancia said. "People love it for this time of year, for Halloween." Hall adds that how it got to the small town is just as surprising. He said local lawyer Fred Ayers bought the house as a kit back in the 1920s through the Sears, Roebuck and Co. catalog. The Sears Archives website states the retailer sold more than 70,000 of the build-it-yourself house kits in nearly 450 different housing styles between 1908 and 1940.
https://www.wvlt.tv/content/news/House-ordered-from-Sears-catalog-in-1920-haunted--497957191.html

MOMENT OF DUH:
The "Nightmare King" is Burger King's latest burger, and the chain claims it can induce nightmares. The quarter-pound beef burger is topped with chicken, cheese, bacon, onions and mayo all on a green sesame seed bun. It's "clinically proven to induce nightmares," the chain said. A new ad shows participants hooked up to sleep monitoring machines after eating it. According to USA Today, nightmares increased 2.5 times over the normal rate, due to various proteins. "I remember hearing voices and people walking around talking," one participate said, per People Magazine. The burger debuts on Oct. 22 and will be available through Nov. 1 for $6.39.
https://www.wvlt.tv/content/news/New-burger-clinically-proven-to-induce-nightmares-Burger-King-says--497956201.html