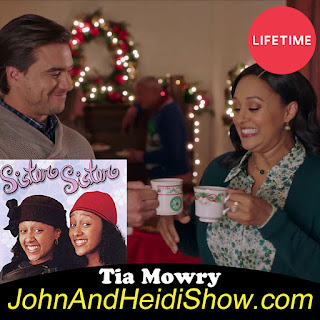 Super excited to visit with Tia Mowry. As a teen, she was on Sister Sister with her twin Tamera. We'll visit about her new Christmas Movie "My Christmas Inn" on Lifetime. - https://zurl.co/gTJf


State prosecutors say they seized cocaine, methamphetamine, and hundreds of prescription pills from a teacher in the West Shore School District hours before she was set to chaperone a student field trip. Lisa Marszalek, a science teacher at New Cumberland Middle School in Pennsylvania, is charged with two felony counts of possession with intent to deliver and a misdemeanor count of possession of drug paraphernalia. Attorney General Josh Shapiro said agents began investigating Marszalek earlier this month and made undercover buys of cocaine and Adderall at her home in New Cumberland. Shapiro said during those drug buys, it was learned that Marszalek was taking several students on an overnight field trip in the coming days. He said agents searched her home Tuesday to intervene so Marszalek would not be able to chaperone the trip. The 47-year-old woman was released after posting a bond on $50,000 bail. A preliminary hearing is scheduled for Nov. 21st. A school district spokeswoman said Marszalek was immediately placed on paid administrative leave. (https://goo.gl/Ni8bYJ)

BIG SCREEN-LITTLE SCREEN:
Greg Kinnear has signed on to star alongside Keira Knightley in the upcoming film “Misbehaviour.” Kinnear will portray Bob Hope in the story of how the newly founded Women's Liberation Movement stormed the stage to disrupt the live broadcast of the 1970 Miss World contest. The show, with a worldwide audience of more than 100 million viewers, returned from the disruption to crown the first black winner in the history of the contest.
Lena Dunham has moved from Brooklyn to New York’s West Village neighborhood. The actress and writer said she wanted to be away from the strollers of Brooklyn and closer to older people, “shuffling around in drug stores.” (http://goo.gl/2MQdFj)


According to online retailers, Black Friday saw a 13 percent increase in sales from last year. Online sales on Saturday and Sunday were up this year as well, and Cyber Monday sales set records. A new survey found that Cyber Monday sales will top $7.8 billion dollars when the final tallies come in. (https://goo.gl/upCHtn)

Shout “Bella” in a dog park and there’s a good chance a new friend will come running. According to Nextdoor.com, Bella is the most popular dog name in the US … as it was in 2017 and 2016. It’s also the top one for dogs in New Zealand and Australia. It’s been most popular among US dogs since 2009, when Stephenie Meyer’s Twilight series starring Bella Swan hit peak popularity.

A suspected car burglar ended up pinning himself when he jumped out of a rolling car during a police chase in Oregon and was hit by the vehicle. The 31-year-old suspect suffered a broken leg.

Japan’s minister in charge of cybersecurity admitted that he’s never used a computer.

Pet lovers are planning to spend approximately $52 on gifts for their pets this Christmas.

A Pittsburgh woman is facing charges after allegedly throwing several cans of SpaghettiOs at another woman’s vehicle. The victim said that as she pulled up to a building for a meeting, a woman approached and began throwing cans of SpaghettiOs at her vehicle. Police said the victim’s vehicle had a broken back window, multiple dents and was smeared with red sauce and pieces of pasta.

Another survey reveals the obvious: We’re always looking at our phones. On average, American consumers now check their smartphones an average of 52 times each day.

Police were called out to a wedding reception in Russia after a stunt went wrong. A magician at the reception had handcuffed the couple together as part of a trick — and then couldn’t free them.

The FDA has ordered food companies to remove six artificial flavors within the next two years.

Hunting unicorns is legal in Michigan. Lake Superior State University in Michigan offers a unicorn hunting license. Unsurprisingly, the “chief herald of the Unicorn Hunters” was once quoted saying: “The pursuit of the unicorn is a lonely quest.”

From French maquillage (makeup), from maquiller (to apply makeup).

WEIRD NEWS:Brought to you by FreshPatch.com (use promo code RADIO to save 10%)
A man has been arrested after he allegedly tried to burn down a traffic camera in Adelaide, Australia twice in one night. The speed camera was smashed and set alight at about 12.20 a.m. on Wednesday, South Australia Police said. Police and fire crews were called to the scene and quickly extinguished the small fire but roughly three hours later it was alight again. Witnesses reported seeing a man throw flaming underwear at the device and called the second fire into police. A 40-year-old Reynella man was arrested at the scene and charged with two counts of arson. A spokesperson for SA Police told the news that closer inspection revealed the charred garment at the base of the speed camera was more likely to be socks and not underwear. Police said they are now investigating just how much damage was done to the camera and whether or not it is still operational. The man’s vehicle was seized for forensic examination and he is expected to front court on Wednesday. (https://goo.gl/6QJ9Jw)

High-end hotels in China run by international chains Marriott, Hilton, and Hyatt have issued apologies after a video went viral, showing unhygienic practices, including one cleaner who used the same sponge to wipe drinking cups and a toilet. The 11-minute video shows hidden camera footage of cleaning staff wiping cups and sinks down with used towels and other unsanitary products at fourteen international hotels in China. Since it was posted by a blogger using the pseudonym, Huazong, the video has been shared widely and watched nearly 30 million times. One online user wrote, “I always thought five-star hotels would be much better; I never expected this to be the case.” Some hotels that later issued apologies included the Le Royal Meridian Shanghai and two Sheraton hotels in other Chinese cities, all operated by Marriott, as well as the Waldorf Astoria in Shanghai. Many of them have said they’re investigating. (https://goo.gl/hihnfq)