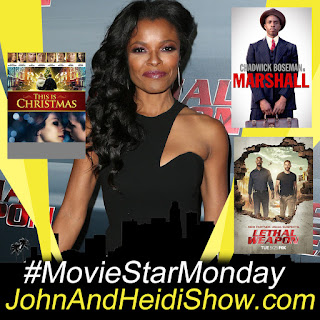 It's another #MovieStarMonday we talk with Keesha Sharp about her new role on Lethal Weapon on FOX TV. More about Keesha - https://www.imdb.com/name/nm1077920/
#MovieStarMonday #JohnAndHeidiShow #KeeshaSharp #LethalWeapon #Marshall

"Somewhere, something incredible is waiting to be known." --Sharon Begley

The Refuge in Flowood,MS….. GOLF COURSE

According to police, a Florida man in Pinellas County was arrested Friday after going after his roommate with a machete. 46-year-old Scott Thomas grabbed the weapon and went after his roommate after the man had gone into his room to avoid an argument with the suspect. Police say Scott used the machete to strike the door of the room several times, eventually breaking through it. The victim reportedly closed and locked the door when he saw Scott coming towards him with the weapon. Police say when the victim saw the blade break through his door, he immediately called them. Scott was arrested and charged with aggravated assault. The arrest affidavit indicates that he was under the influence of alcohol. (https://goo.gl/yVpVwU)

A school of higher learning actually measured Tootsie Pop licks.
It officially takes 364 licks to get to the center of a Tootsie Pop. Well, at least according to engineering students at Purdue University, who used a proprietary “licking machine” rather than a human tongue

From Greek hermēneutikos, from hermēneuein ‘interpret’ from hermeneus ‘interpreter’. Eponymous - after Hermes in Greek mythology, who served as a messenger and herald for other gods. First known use: 1737.

WEIRD NEWS:
Two South Carolina roommates who contacted cops to report that their home was burglarized listed frozen pizzas, hot dogs, a bottle of Jack Daniels, and the cremated remains of a relative among the items stolen. Upon returning to their Spartanburg home early Saturday evening, Alisha Moseley and Savannah Fruchey noticed that their front door was unlocked. The women told police that after a break-in last month, they had the front door lock replaced and they were the only ones with keys to the new deadbolt. An inventory of their residence revealed that the burglar (or burglars) swiped cosmetics, Roku devices, jewelry, and assorted food items. The stolen items also included “Ms. Fruchey's grandfather's ashes.” While the report does not address why the ashes were stolen, in prior thefts, intruders have mistaken cremated remains for powdered narcotics. Moseley and Fruchey said that they “didn’t know who would keep breaking into their apartment.” (https://goo.gl/YPxcGN)

MOMENT OF DUH:Brought to you by FunkyMonkeyShirts.com (funny shirts & more)


Authorities say a Florida man attacked his elderly landlord with a machete after the older man confronted the tenant about unpaid rent. News outlets report that 48-year-old Jimmie Lee Leeks was arrested in Fort Lauderdale and charged with aggravated battery with a deadly weapon. Police say 89-year-old Maurice Blanchar was renting a studio apartment in his backyard to Leeks. Blanchar told police he went to talk to Leeks about late rent money on Wednesday and said Leeks pulled out a machete and tried to kill him. Blanchar suffered cuts to his arm, head, and leg but was able to somewhat defend himself with a cane.(https://goo.gl/W3Bd3w)