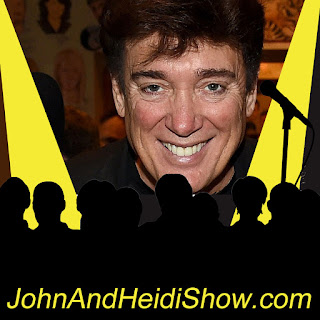 Our guest today is Ronnie McDowell. He's known for being THE VOICE of Elvis in several movies.... has many of his own hits too. Here's a link to his song “The King Is Gone” - https://www.youtube.com/watch?v=VzNpOs9-3K8

IS IT A GOLF COURSE... OR IS IT A REHAB CENTER!
Brought to you by TimeForRehab.com
I'm going to give you the name of a REAL place...I want you to tell me if it houses a GOLF COURSE or a REHAB CENTER!
Foothills in Phoenix, AZ ….. GOLF COURSE
(starting soon.... Studies, Surveys & Such)

BRAIN ON DRUGS:
Brought to you by TimeForRehab.com! Each day we talk about people doing dumb things under the influence, but addiction is no laughing matter… if you or someone you know needs help, there is help. You can learn more at TimeForRehab.com.
A Florida Keys man pulled over for speeding Christmas Eve locked his keys inside his car when Monroe County Sheriff’s Office deputies told him they were going to search the vehicle. Deputies found small amounts of cocaine, heroin, methamphetamine, amphetamine pills, and marijuana inside the Lexus of 40-year-old Charles Albert Garcia. Deputy Jason Farr explained that he pulled Garcia over shortly after 11:00 p.m. Monday after clocking him on his radar driving his Lexus 70 mph in a 45-mph zone. Farr asked Garcia for his license, but Garcia said it was suspended but would be reinstated soon. After Farr said he was going to search the Lexus, Garcia threw the keys inside the vehicle and locked the doors. A towing company unlocked the door, and deputies searched the vehicle, finding the drugs. (https://hrld.us/2LFvLvH)

BIG SCREEN-LITTLE SCREEN:
Brought to you by ChannelSurferTV.com (get TV with NO monthly fee)

Miley Cyrus and Liam Hemsworth got married over the holiday in a small ceremony in Tennessee. (http://goo.gl/fYJucx)

The new Mayor of the Mexican town of Oaxaca was shot dead on his first day in office. (https://nyp.st/2SwXL7x)

Urban legend says gum will stay in your digestive tract for seven years. Scientist say otherwise. While it's true that your body can't digest gum its rubber base is immune to the enzymes in your body it moves through your system in no more time than any other substance that isn't easily digestible, such as corn. https://www.doctoroz.com/article/facing-faqs
FUN FACT FOR YOU:
Share this with your friends... they'll think you're really smart!
Chevy Chase was the first member of the original Not Ready for PrimeTime Players to leave the cast of Saturday Night Live.

FEAR THIS… FUN PHOBIA!
Arrhenphobia… Fear of men.
WEIRD NEWS: Brought to you by WeirdGiftOfTheDay.com
Police say that a man in Turlock, California stole a car, attempted to flee from officers at a speed of over 110 mph, crashed, and hid in a cattle pen covered in cow excrement before surrendering after getting too cold. The Stanislaus County Auto Theft Task Force (StanCATT) told the Modesto Bee that 40-year-old Bryan Woolever stole a Kia Optima, but was pulled over by a StanCATT agent and a member of the Turlock Police Department. StanCATT officials said that Woolever initially pulled over, but randomly sped away in the middle of the traffic stop, nearly striking the StanCATT agent. Woolever reportedly drove faster than 110 mph in the Kia Optima, and officers decided not to pursue him due to the potential safety risks of a police chase at that speed. The Stanislaus County Sheriff Department's helicopter was used to track Woolever, who ended up crashing into a pile of dirt near a dairy farm. Woolever exited the vehicle and attempted to flee on foot, and ultimately hid in one of the dairy farm's cattle pens. When police dogs eventually located the pen Woolever was hiding in, he was surrounded by around 100 cows and was covered in their feces.
(https://bit.ly/2QRSOt9)

Talk about terrible timing -- two women were caught allegedly stealing $1,900 worth of electronics from a Bloomfield Township, Michigan Target on the same day the store was packed with police for a Shop with a Cop event. About 15 police officers from four departments — Sylvan Lake, Keego Harbor, Orchard Lake and Bloomfield Township — were at the Target at 2400 Telegraph Wednesday night, helping 22 disadvantaged children pick out Christmas presents for their families. 40-year-old Keiana Wilson and 18-year-old Dana Johnson were also there. Brown said store loss prevention officers watched on cameras as the women loaded a cart with two Apple watches, two iPads and a Nintendo gaming system. At about 7:30 p.m., they walked past the registers without paying. A police sergeant said, “The loss prevention officers actually apprehended them, then they asked for police assistance. The police officers were only about 20 feet away when they tried to walk out of the store.”
(https://bit.ly/2R5q4wr)

Did you know the first French fries weren't actually cooked in France?
They were cooked in Greece.
GOOD NEWS: Brought to you by WeirdGiftOfTheDay.com

Women Encircle a Crying Mom Whose Toddler Was Having a Meltdown at the Airporthttps://www.goodnewsnetwork.org/women-encircle-crying-mom-whose-toddler-meltdown-airport/