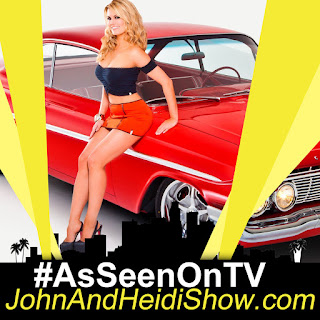 Courtney Hansen, the lovable co-host of TLC's hit car-makeover show "Overhaulin'" and TLC specials "Rides: Biggest Spenders" and "Million Dollar Motors". Courtney also hosted 10 seasons of Powerblock/PowerNation for Spike TV, and in later years for NBC Sports and CBS Sports, a two-hour block of 4 popular automotive shows. Now Courtney is the Executive Producer of the new series “The Ride That Got Away” which she hosts alongside world renowned car designer Troy Ladd. On FYI Channel Saturday nights at 10pm (EST) and on The History Channel on Sunday Mornings at 10am (EST) Also available on demand on HULU Live and History On Demand.

A new study suggests that you can eat your way to better mental health. (https://cnn.it/2X6ftl3)
BRAIN ON DRUGS:
Brought to you by TimeForRehab.com! Each day we talk about people doing dumb things under the influence, but addiction is no laughing matter… if you or someone you know needs help, we're here to help! You can learn more at TimeForRehab.com.

According to prosecutors, a Pennsylvania couple’s wedding ended in a drunken brawl after the groom hit on an underage waitress — then followed the teen into a bathroom stall and groped her. 31-year-old Matthew Aimers was charged Wednesday in connection to the nightmare nuptials November 24th at a country club in Northampton Valley. Court documents detail a wedding from hell in which the groom left in handcuffs. The newlywed now faces numerous charges, including indecent assault, imprisonment of a minor, and disorderly conduct. During the reception, Aimers allegedly hit on a teen waitress and “asked her to go outside and make out.” The waitress said she rejected him. But he later followed her into the women’s bathroom, pulling her into a stall, where he allegedly groped her and exposed himself. Police later responded to reports of a fight at the country club and found the groom “pushing and punching people.” A brief struggle ensued before police took Aimers into custody. (https://nyp.st/2Gxjd9a)
BIG SCREEN-LITTLE SCREEN: Brought to you by ChannelSurferTV.com

It's been reported that this year's “Oscar Swag Bags” will contain chocolate cannabis edibles. (https://cnb.cx/2tqFQEx)

Netflix has confirmed that it has officially cancelled its last remaining Marvel series, “Jessica Jones” and “The Punisher.” “Jessica Jones” will conclude after its third season while “The Punisher” is ending after only two seasons. The cancellations mark the end of a relationship between Netflix and Marvel that began in 2013.

SCOOP OF THE DAY: Brought to you by BetterCreditCards.net
Israel Aerospace Industries has announced plans to send the first Israelis to the moon. (https://yhoo.it/2BFmvnq)

The American sailor seen in an iconic photo kissing a woman in Times Square at the end of World War II died on Sunday, his family confirmed yesterday. George Mendonsa was 95 years old. In the photo, the young sailor is depicted kissing Greta Zimmer Friedman on August 14, 1945. The pair did not know each other. Mendonsa had served on a destroyer during the war and was on leave when the war ended.GIRL SCOUT COOKIE QUIZ
A tongue-in-cheek quiz to play with a cohost, or to use as an actual(and very winable) contest with a listener. For reference, here’s the cookie page. A zip code search also tells you when the cookies go on sale in your area.
Tasty cookies topped with creamy peanut butter and covered with a luscious, chocolatey coating.
• Follow-me-here’s
• Tag-a-longs*
• Skip-here-n-theres
Crisp n’ crunchy oatmeal cookies with creamy peanut butter filling. No artificial color. No artificial flavor.
• Alamine Lefts
• Grab-you-partner-by-the-hands
• Do-si-dos*
Short, tender, delicate-tasting shortbread that melts in your mouth.
• Trefoils*
• Treebarks
• Shortbreads
A thin wafer covered with a smooth chocolatey coating. Made with natural peppermint
• Mint crunchs
• Doublemints
• Thin Mints*
Tender vanilla cookies, covered with caramel, rolled in coconut, and striped with chocolate.
• Pago Pagos
• Samoas*
• Coco-luaus

FUN FACT FOR YOU:
Share this with your friends... they'll think you're really smart!
A Parasite Destroys the Tongue of a Fish and Replaces Its Tongue With Its Own Body. Pretty much the creepiest creature ever. This isopod, Cymothoa exigua, enters a fish through its gills and attaches to its tongue. From there it severs the blood vessels connecting to the tongue (which causes it to fall off) and attaches itself to the stub that’s left, taking over the food consumption from that point forward.

WEIRD NEWS: Brought to you by WeirdGiftOfTheDay.com
A man’s nap in the back of his car in Delaware turned into a nightmare after the car he was sleeping in was stolen and crashed. Musician Justin Koerner told the News Journal he had spent a night playing music with friends, went to sleep in his vehicle, and had a dream involving someone jumping in his front seat. A Newark police statement says someone drove off in the car Sunday morning and bailed after seeing the man sleeping in the back. Police say the car crashed. Koerner says he awoke and saw car treads on a lawn and a destroyed bush, then realized he hadn’t been dreaming. He says police appeared ready to take him away before another officer said a neighbor had security camera footage of the incident. (https://nyp.st/2X6o07u)
MOMENT OF DUH: Brought to you by FunkyMonkeyShirts.com

A Florida man has been charged with pointing a laser at a law enforcement helicopter. The Pinellas County Sheriff's Office helicopter was monitoring a fire in Clearwater early Sunday when its crew spotted the laser coming from a nearby yard. A sheriff's office statement says 48-year-old Brian Harting shined a red laser at the helicopter three times from his backyard. According to the statement, Harting told deputies that he did not know it was illegal to aim a laser at the aircraft. Harting was charged with felony misuse of a laser lighting device and held at the county jail. Bond was set at $25,000. Jail records did not show whether Harting had an attorney. He had been released from the jail Feb. 10th after posting bond on a heroin possession charge. (https://bit.ly/2DPF0G8)
THESE THREE THINGS!
GOOD NEWS: Brought to you by www.80sInTheDesert.rocks
(Use promo code RADIO to save $25 per ticket)