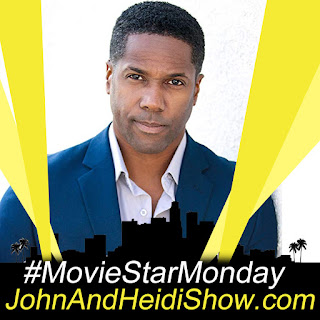 It's a #MovieStarMonday with Rodney Damon Collins. He made his television debut in November 2014 as a contestant on the nationally televised game show, "Let's Ask America." He has recently been added to the cast of the Amazon Prime Television Show "Chosen Kin Origins." He can be seen in the film "The Job Interview." He has also participated in several stage productions. He performed in the stage hit play SoulMate at Cleveland's famous Playhouse Theater. He is using his platform to impact and entertain with compelling stories!

SURVEYS, STUDIES & SUCH!
Scientists now believe that drinking celery juice everyday could be the key to extending your life. (https://bit.ly/2D78ZsX)

A Virginia man who was reported to be wandering around without clothes last Tuesday morning was detained and charged following a series of events in which he allegedly smoked weed, bit his dog on the ears, and bit an off-duty FBI agent in the neck. Upon arriving to the scene in Manassas around 8:35 a.m., a responding officer found the suspect, 31-year-old Cory Michael Phillips, “standing naked in the middle” of the road. The officer eventually used pepper spray on the suspect, who was thought to be under the influence of something, after initial efforts to detain him proved unsuccessful. According to an incident report, “The accused then advanced toward an off-duty FBI agent who had stopped to assist the officer, and a struggle ensued between all the parties. During the struggle, the accused bit the FBI agent, identified as a 51-year-old male, on the neck causing a minor injury.” Authorities later determined that Phillips was allegedly smoking marijuana at home that morning and “started acting erratically.” Phillips was ultimately detained and taken to a hospital before being transported to the Adult Detention Center and held without bond. (https://nyp.st/2S4PwDy)

Newlyweds Justin Bieber and Hailey Baldwin told Vogue Magazine that marriage is very hard and that they’ve just started couples therapy. This is shocking! They got married five months ago. (https://pge.sx/2BrpCzp)

Joy Behar raised eyebrows on “The View” after revealing that she once dressed as a black woman for Halloween. (http://goo.gl/xH3yDN)

Liam Neeson is denying he’s racist, despite the fact he admitted that he once went looking for a black man to hang after a female friend told him she was raped by a black man. (https://yhoo.it/2DVlNnV)
SCOOP OF THE DAY: Brought to you by BetterCreditCards.net

T-Mobile is giving away free Taco Bell to anyone who signs up for their app.
(https://bit.ly/2GgkgLs)

A survey by Wall Street 24/7 named Mendota, California as the worst city in the country to live in. Florida City, Florida came in second. (https://bit.ly/2WWdDDc)

Passengers on the New York City Subway were sickened by a mysterious odor that caused some people to vomit. (https://cbsloc.al/2GfW37N)

An Indiana woman was arrested for drug possession after she barked at a police dog. (https://bit.ly/2BohCPI)

Amazon apologized to a Canadian woman who ordered a cat dish and received a stun gun in the mail. (https://fxn.ws/2Wyy4pm)India’s World Famous “Granny Elephant” has died at the age of 88. She was believed to be the oldest living elephant in captivity.(https://bit.ly/2Dis0Zk)

Michael Bolton fell asleep during a live interview with “The Morning Show” in Australia. (http://goo.gl/TZgh4b)
FUN FACT FOR YOU:
Share this with your friends... they'll think you're really smart!
It Rains Diamonds on Saturn and Jupiter
Some distant planets sport some serious bling. Atmospheric data indicates that the gaseous planets of Saturn and Jupiter experience hail storms of diamonds, due to lighting storms that turn methane into soot, which hardens into graphite then diamonds as it falls. One scientist told the BBC that the biggest diamonds would be about a centimeter in diameter—or “big enough to put on a ring.”

WEIRD NEWS: Brought to you by WeirdGiftOfTheDay.com
A Bronx, New York woman went berserk in a New Jersey Walmart — attacking five people with pepper spray and brandishing a knife. 39-year-old Imani Jones allegedly launched the wild attack while waiting in line at the North Bergen store on Sunday afternoon. According to the report, Jones began yelling at store employees, then broke out her can of mace and sprayed at least four employees who were standing behind a counter. She then sprayed another customer and began to punch and scratch her in the face. Jones then produced a knife and cornered an employee into a room and blocked the door with boxes. Police responded and pepper sprayed Jones before taking her into custody. She was arrested and hit with a number of charges, including aggravated assault, endangering another person, and possession of a weapon for an unlawful purpose. (https://nyp.st/2TARqIy)

The carjacking didn't go as planned for a gunman in the Lafayette Square neighborhood of St. Louis on Monday night. He used his gun to tap on the driver's side window of a car at about 7:30 p.m. He ordered the 33-year-old male driver to get out of the car, then demanded his keys. According to police, the victim stepped out of the car but refused to hand over the keys. The gunman pointed a gun at the victim's feet and pulled the trigger several times -- but the gun wouldn't fire. The victim tossed his car keys, and both he and the gunman raced to get the keys. As they ran, the gunman dropped his cellphone, and the victim picked it up. The gunman apparently got to the car keys first, but police say he was left negotiating with the victim. He said he'd trade the keys for the phone. After the swap, the gunman ran off without getting any of the victim's property. Police say the victim was uninjured and they are still looking for the wannabe thief. (https://bit.ly/2HVqthq)