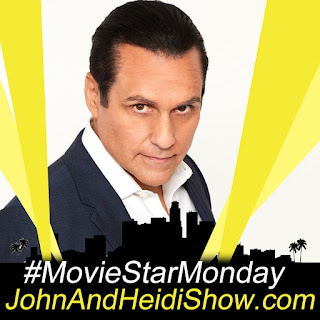 It's a #MovieStarMonday with Daytime Emmy Award winning Actor Maurice Benard. General Hospital's Sonny Corinthos since 1993. Before that he was on the ABC drama All My Children as Nico Kelly. Now he portrays John Gotti in the new Lifetime movie Victoria Gotti: My Father's Daughter, based on Victoria Gotti’s book This Family of Mine: What It Was Like Growing Up Gotti.

A study in New Zealand has found that people are happier working four days per week rather than five. (https://bit.ly/2SaYCtt)

An Alabama man with a unique name is locked up on a felony narcotics possession charge following his arrest earlier this month. 19-year-old Blue Berry Hill was busted on February 3rd following a traffic stop in Fayette. According to an arrest warrant, Hill was in possession of methamphetamine and drug equipment when nabbed by a Fayette County Sheriff’s Office deputy. Hill was booked into the county jail on a felony narcotics possession count and a misdemeanor paraphernalia charge. Hill is being held in lieu of $1300 bond. The song “Blueberry Hill,” made famous by Fats Domino, has been recorded or performed by Led Zeppelin, Celine Dion, Vladimir Putin, and Bing Crosby and Louis Armstrong. (https://bit.ly/2tjFqj4)

SCOOP OF THE DAY: Brought to you by BetterCreditCards.net
Ariana Grande is the first artist to earn the top three spots on the Billboard Hot 100 since The Beatles did it in 1964. (https://gma.abc/2EjhEdl)

Customs and Border Protection agents in Texas reported that they confiscated $12.7 million worth of methamphetamine at the Pharr International Bridge to Mexico over the weekend. Agents found the drugs Saturday in a commercial tractor-trailer carrying frozen strawberries. A 42-year-old Mexican national was arrested and turned over to Homeland Security.

Three cows wandered into a grocery store in Hong Kong and began eating everything in sight.

Samsung just unveiled their new Galaxy phones. One of them is foldable and costs almost $2,000. The Galaxy Fold will be in stores in late April. The company says the new Fold “gives you the portability/functionality of a cell phone with the multimedia experience that you can get from a tablet.” In tablet form, The Fold features a 7.3 inch display.

FUN FACT FOR YOU:
Share this with your friends... they'll think you're really smart!
Zombie Spiders Exist. There’s a type of Costa Rican wasp that attacks a local org spider and paralyzes it. From there, it lays eggs in the spider’s abdomen. The spider wakes back up, until about two weeks later, when the larvae that are growing on the spider’s belly take over the spider’s brain, causing it to create a strange web. They then burst out of the spider and use the web to create their own wasp nest.

WEIRD NEWS: Brought to you by WeirdGiftOfTheDay.com
A Florida man has been arrested for allegedly slapping a woman with a bowl of chili, as well as hitting her and pulling her hair. According to the arrest report issued by Escambia County Sheriff's Office, on October 26th, 2018 the victim told police she was in a parked car with her boyfriend when 33-year-old Jerald Jenkins approached them. Jenkins then asked the victim who was in the car with her. The report said that the victim stated when she said it was her boyfriend Jenkins slapped her with a bowl of chili. The victim stated that the raging lunatic then pulled her out of the car by her hair and began to hit her in the face and body. The victim's boyfriend got out of the car and attempted to separate them, and that's when Jenkins ran inside the victim's house and came back out with a large kitchen knife. The report says Jenkins swung the knife at the victim and her boyfriend, and it was a witness who came and broke up the fight. The report also says the victim and her boyfriend got into her car and left the area. Jenkins was arrested on Thursday and charged with battery, aggravated assault and larceny. (https://bit.ly/2DQtk62)
MOMENT OF DUH: Brought to you by FunkyMonkeyShirts.com

An Aide to a U.S. congressman from Louisiana was busted in a prostitution sting over the weekend. 47-year-old Jerod Prunty, who works for Rep. Clay Higgins, was charged with two counts of pandering in Lafayette Parish last Saturday. Police officials said at a press conference that Prunty was caught up in a sweep of a number of massage parlors and three houses, which were allegedly being used as brothels. A spokesman for Higgins told the Daily Advertiser in a statement, “We are shocked and saddened to learn of allegations against Jerod. His arrest is deeply troubling.” The prostitution sting was a result of a months-long investigation, which started after complaints from local residents and neighbors. Police arrested seven women and two men as involved in prostitution. (https://nyp.st/2GzzXgU)
THESE THREE THINGS!
GOOD NEWS: Brought to you by www.80sInTheDesert.rocks

Powerlifter Hailed as Hulk Hero After He Lifts Jeep Off of Injured Driver Trapped Underneath
https://www.goodnewsnetwork.org/powerlifter-hailed-as-hulk-hero-after-lifting-jeep-off-of-trapped-driver/

Awesome story! Please feel free to share YOUR good News too!
Also, consider joining John & Heidi at 80s In The Desert on
May 3rd & 4th in Las Vegas – www.80sInTheDesert.rocks
(Use promo code RADIO to save $25 per ticket)
Newer Post Older Post Home