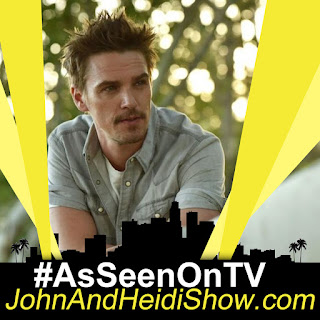 Today we visit with Riley Smith, from the hit shows “Nashville” & “Life Sentence” about his new series “Proven Innocent” (with Kelsey Grammer) on FOX TV.https://www.fox.com/proven-innocent/

Riley is also a musician and has a goal to put out ONE SONG PER MONTH in 2019. His latest is called RADIOLISTEN HERE: https://soundcloud.com/rileysmithsongs/radiolink
OFFICIAL WEBSITE - http://rileysmithofficial.com/

A survey found that cassette tapes are making a comeback, with over 50,000 albums sold on cassette in the past year.For those of you under 40, a cassette was a device you could record music on. (https://bit.ly/2U79Qkm)
BRAIN ON DRUGS:
Brought to you by TimeForRehab.com! Each day we talk about people doing dumb things under the influence, but addiction is no laughing matter… if you or someone you know needs help, we're here to help! You can learn more at TimeForRehab.com.

A veteran Cleveland firefighter who was arrested three times in 24 hours, all at Cleveland Hopkins International Airport, pleaded no contest Wednesday to two misdemeanor charges. 55-year-old Battalion Chief William Graham entered the plea to two counts of intoxicated disorderly conduct, both minor misdemeanors, stemming from his first two arrests. Formal charges have not been filed in connection with his third arrest. Cleveland Municipal Judge Pinkey Carr found Graham guilty of the two charges and sentenced him to pay $100 in fines on top of court costs. She gave him credit for two days served in the Cuyahoga County Jail. Carr said during the hearing the maximum she could have fined Graham was $300. According to court records, Graham was drunk and hostile toward airport passengers and employees. According to a statement from the airline, he was not allowed to fly on his scheduled JetBlue flight to Boston because he was drunk. (https://bit.ly/2DJMGd3)
BIG SCREEN-LITTLE SCREEN: Brought to you by ChannelSurferTV.com

The Oscars went off Sunday without a hitch... and without a host. TV ratings were at an all-time low. Green Book was the most talked about film going into the weekend, Jay-Z and Beyonce held a star studded after-party for the second straight year. (https://bit.ly/2XtH4wG)

Lady Gaga was seen vacationing in Mexico after her recent split from fiancé Christian Carino. (https://pge.sx/2T9J4ux)

SCOOP OF THE DAY: Brought to you by BetterCreditCards.net
Police are looking for a group of thieves who broke into the car of Tampa Bay Buccaneers running back Peyton Barber and stole the team’s playbook. (https://2wsb.tv/2Ixti8F)

Tinder banned a San Francisco woman from their dating app because her profile picture showed her posing with a deer she killed. (https://abc7ne.ws/2XiX6ZX)

Queen Elizabeth is reportedly planning to hold a “Secret Dinner” with U.S. Ambassador Woody Johnson, who is also the owner of the New York Jets football team. (https://nyp.st/2Ebszo6)

A White House Panel will study whether or not climate change is a national security threat. (https://nyti.ms/2DWMLdw)

An Indian professor who compared Prime Minister Modi to Hitler is waiting to be jailed. (https://nyti.ms/2GDgT18)


FUN FACT FOR YOU:
Share this with your friends... they'll think you're really smart!
You Can’t Breathe and Swallow at the Same Time
It’s because both go through the pharynx.

Misophobia… Fear of being contaminated with dirt or germs.

WEIRD NEWS: Brought to you by WeirdGiftOfTheDay.com
A man is facing a property damage charge after police said he threw a toilet through the glass at the front of the East St. Louis Board of Education building. Police said they were called to the building at 10th and State Streets. When they got there, people in the building said Dave Toliver, a 36-year-old Florida man, carried the toilet to the building and threw it through the glass. Police said they found him a short time later near the intersection of 11th and Cleveland. Officers said he was sitting on another toilet. He was charged with one count of criminal property damage, a class-three felony. His bond was set at $10,000. (https://on.ksdk.com/2Nh5eFK)
MOMENT OF DUH: Brought to you by FunkyMonkeyShirts.com

Authorities says a suburban Houston man was injured after he accidentally shot himself in the stomach at his daughter's birthday party. The Harris County Sheriff's Office says the unidentified man was spinning a gun in his hand on Saturday when the weapon accidentally fired. Authorities say the accidental shooting took place during a birthday party at the man's home for his 16-year-old daughter. The man was taken to a local hospital for treatment. His condition was not immediately known. (https://bit.ly/2E0D9yn)
THESE THREE THINGS!
GOOD NEWS: Brought to you by www.80sInTheDesert.rocks
Anonymous Police Officer Leaves Pregnant Waitress ‘Hysterical’ With Joy When He Leaves $100 Tip
https://www.goodnewsnetwork.org/anonymous-cop-leaves-pregnant-waitress-hysterical-with-100-tip/
Awesome story! Please feel free to share YOUR good News too!
Also, consider joining John & Heidi at 80s In The Desert on
May 3rd & 4th in Las Vegas – www.80sInTheDesert.rocks
(Use promo code RADIO to save $25 per ticket)